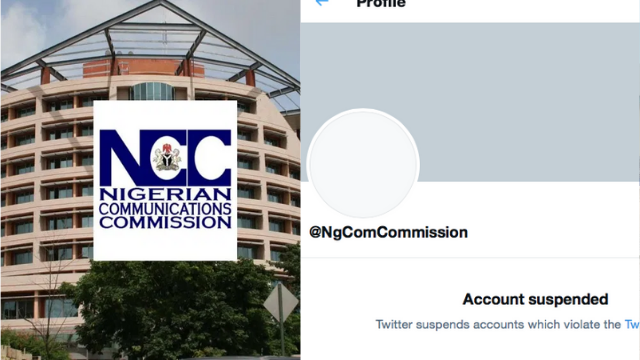 An NCC staff who is not authorised to speak on behalf of the commission said, the commission is aware of the suspension and that the account was suspended due to offshoot of the global issue currently with Twitter.

“It’s an offshoot of the global issue currently with Twitter and we are currently on it to get the account back.

“What we are experiencing right now is the issue with Twitter where people can’t login for a while,” she said.

The ICIR was unable to get any response from Twitter to know the reason why the account was suspended.

All efforts to reach Twitter was unsuccessful because the mail sent was not responded to as at the time of filling this report.

Spam: Most of the accounts Twitter suspend are suspended because they are spammy, or just plain fake, and they introduce security risks for Twitter and all of their users.

These types of accounts are against Twitter Rules. Unfortunately, sometimes a real person’s account gets suspended by mistake, and in those cases Twitter work with the person to make sure the account is unsuspended.

Account security at risk: If Twitter suspect an account has been hacked or compromised, they may suspend it until it can be secured and restored to the account owner in order to reduce potentially malicious activity caused by the compromise.

Abusive Tweets or behavior: Twitter may suspend an account if it has been reported to them as violating rules surrounding abuse. When an account engages in abusive behavior, like sending threats to others or impersonating other accounts, they may suspend it temporarily or, in some cases, permanently.

No link between 5G and coronavirus – NCC dispels…

No license on 5G network issued in Nigeria – FG