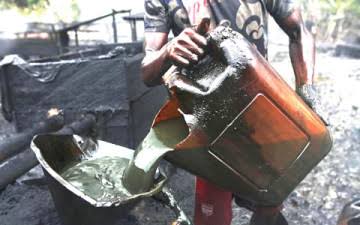 THE latest market report of the Organisation of Petroleum Oil Producing Countries (OPEC) has again showed how the Nigerian federal government has been struggling to meet the country’s allocated quota of 1.7 million barrels per day production.

According to the report, Nigeria’s crude oil production did an average of 1.238 million barrels per day (bpd) in June 2022.

Nigeria, despite not meeting its qouta of 1.7 million barrels per day, faces a twin challenge of N4 trillion subsidy payments and rising oil theft.

The report, however, observed that the figure showed an increase of 5,000 barrels per day when compared to the 1.233 million bpd produced averagely in the month of May 2022.

The document said that despite the improvement in fossil fuel prices, the short-term economic outlook for Nigeria was clouded by high inflation, which had reduced private sector optimism and weakened consumer spending.OPEC Headquarters in Vienna, Austria

Apart from not meeting up with the OPEC quota, Nigeria is still struggling with concerns of oil theft, which deprives it of huge revenue resources.

Speaking on the concern, the Director-General, Budget Office of the Federation, Ben Akabueze, said on Thursday in Lagos that joint ventures (JVs) were bleeding the most as a result of rising crude oil theft and rampant destruction of oil production facilities across the country.

Akabueze, who spoke at the Lagos Chamber of Commerce and Industry (LCCI) economic and business outlook seminar 2022 tagged, ‘LCCI Mid-year Economic Review and Outlook Conference’, pointed out that JVs had the highest stake in oil and gas contracts.

He maintained that the implications for federal government’s revenue were vast in a different way, with the stake much lower on production sharing contracts.

The minister blamed Nigeria’s inability to meet OPEC’s quota due to what he described as industrial-scale crude oil theft and the rampant vandalism of crude oil facilities.

He said there were different business arrangements in the oil and gas sector with different implications for government’s revenue.

Commenting on fuel subsidy , Akabueze projected that Nigeria would spend more than the N4 trillion proposed, pointing out that the Federal government had never been clear about the cost of fuel subsidy.

“On one hand, we do not even know what we consume, which is a big embarrassment. I listened to the National Assembly saying the NNPC is the sole importer of petrol, and they said they imported about 63 million litres per day. How can the consumption be more than what we are importing?” he wondered.

Nigeria’s Minister of State for Petroleum Resources, Timipre Sylva, identified lack of investment in the oil and gas sector as contributing to Nigeria’s inability to meet OPEC quota.

“We are not able to get the needed investments to develop the sector and that affected us,” Sylva said.

Remarkably, Nigeria has been experiencing some of the worst crude oil theft in its history with millions of dollars lost daily.

Several allegations have been made against the ability of security agencies to guard the pipelines.

The chairman of the Nigerian Upstream Petroleum Regulatory Commission (NUPRC), Gbenga Komolafe, revealed in March this year that only about 132 million barrels of the 141 million barrels of oil produced in the first quarter of 2022 were received at export terminals.

Komolafe said, “This indicates that over nine million barrels of oil have been lost to crude theft. This equates to a loss of government revenue of approximately $1 billion in just one quarter.

“This trend poses an existential threat to the oil and gas sector and, by extension, to the Nigerian economy, if left unchecked.”

To address the concern, the deployment of an intelligent pipeline monitoring system has been suggested as a viable option to curb the trend.