Infographics and Data Reports
By Damilola OJETUNDE On Apr 15, 2021

INFLATION rate in Nigeria has increased to 18.17 per cent in March 2021, indicating the highest level since January 2017, the Consumer Price Index (CPI) of March 2020 has shown.

It is also an indication that the cost of living is rising fast in Africa’s most populous nation.

The report, published by the National Bureau of Statistics (NBS), also revealed that food for the increasing number of poor Nigerians is not getting cheaper as food inflation increased from 21.79 in February to 22.95 percent in March, the highest point since the 2009 data series.

“This rise in the food index was caused by increases in prices of Bread and cereals, Potatoes, yam and other tubers, Meat, Vegetable, Fish, Oils and fats and fruits,” NBS explains.

According to the report, increases were recorded in the 12 Classification of Individual Consumption According by Purpose (COICOP) divisions that yielded the headline index.

Others are health, transport, communication, recreation and culture, education, restaurants and hotels, miscellaneous goods and services.

The closure of land borders in the country in August 2019 was a major driving force for the upward trend of the inflation rates of the country, according to NBS data, which shows the rates started increasing from September 2019. 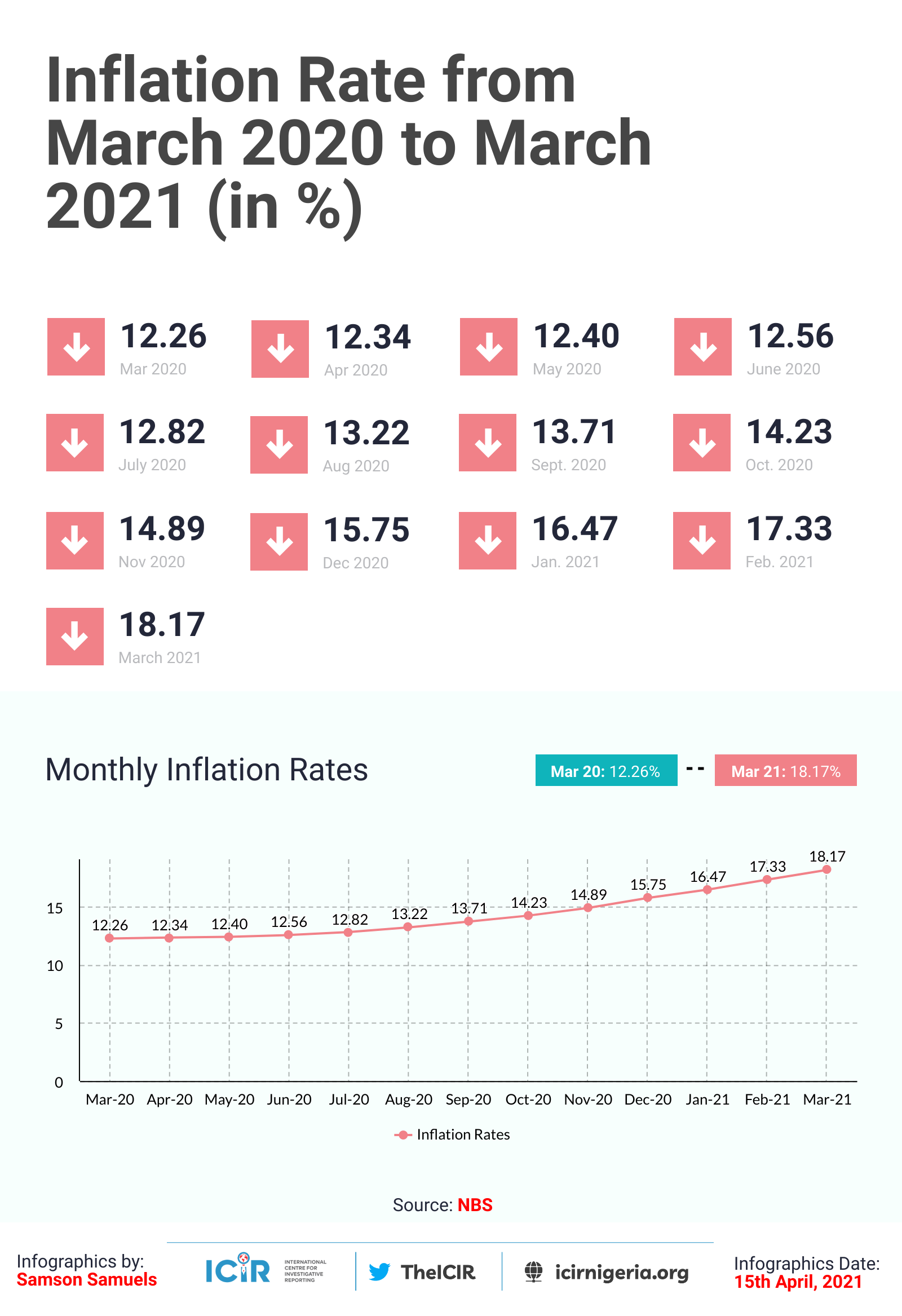 Why Inflation is on the rise

Economists and other experts attribute rising inflation to exchange rate risks as well as dwindling productivity and production.

“Then, there is the issue of low productivity caused by skyrocketing cost of inputs and raw materials. When products or food items are not in expected quantity, demand exceeds supply and prices rise. So we need to address this point by supporting local farmers and manufacturers with tools that can enhance their productivity,” he recommended.

“There is also the issue of money supply in the market. Is the money going to government or to productive sectors?” he asked.

Financial Derivatives CEO Bismark Rewane, in an interview Aljazeera last month, noted  that stagflation crisis ( inflation and unemployment) “would take a long time to resolve, with inflation eating up economic gains to the point where any government stimulus might be too weak to generate jobs.”

The International Monetary Fund (IMF) has advised the Central Bank of Nigeria (CBN) in February 2021 that it would need to tighten measures once inflation was out of control, urging the apex bank to stop financing government deficit to ease price pressures.

According to the World Poverty Clock, Nigeria has the highest number of poor people globally, with 89.8 million living in extreme poverty. Also, the country is home to one of the largest unemployment rates globally, with 33.3 percent of its working population out of jobs.