Report: Nigeria’s economic collapse is imminent, beyond its oil based economy

This was revealed in a report titled “Economic disruption – How the energy revolution will affect Nigeria” released on Wednesday by SBM Intelligence, an organisation dedicated to the collection and analysis of information, basing its projections on the rise of alternative renewable energy.

SBM Intel analysis stated in its report that Nigeria’s government failure to harness its prospects in the oil revolution and its lack of strategy to take advantage of the economic anxiety in the Gulf nations will make the country an economic liability rather than an asset.

“Fifteen years ago, the United States, US, was a top destination for Nigeria’s crude oil exports until it developed its shale oil production, today they barely buy anything from Nigeria, and India has replaced the US as Nigeria’s top energy importer.

“The energy market is competitive, Nigeria sells its petroleum without a clear strategy to make its top suppliers dependent on its petroleum exports. India and China are currently Nigeria’s most important trading partners. India for exports and China for imports, and there is sufficient room for growth in these relationships,” the report noted.

Shale oil is a high-quality crude oil that lies between layers of shale rock, or siltstone. Oil companies produce shale oil by fracturing the layers of rock that contain the layers of oil.

The US drive to increase its shale oil production had put Organisation of Petroleum Exporting Countries, OPEC’s “fragile five” namely Angola, Iran, Libya, Nigeria and Venezuela in an oil revenue shortfall as they could not endure a prolonged global decrease in the price of crude oil. 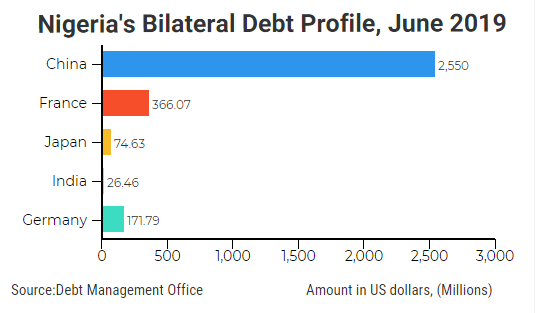 “Without major economic investments to show for all the borrowed sums, it means the debts will be much harder to repay,” the report said.

However, data from the Debt Management Office showed that Nigeria’s external debt stock had risen by 148 per cent since 2015.

Nigeria’s highest lender is Eurobonds whose loan to the country is worth $10.87 billion, World Bank at $8.90 billion and China’s loans to Nigeria is currently estimated at $2.55 billion.