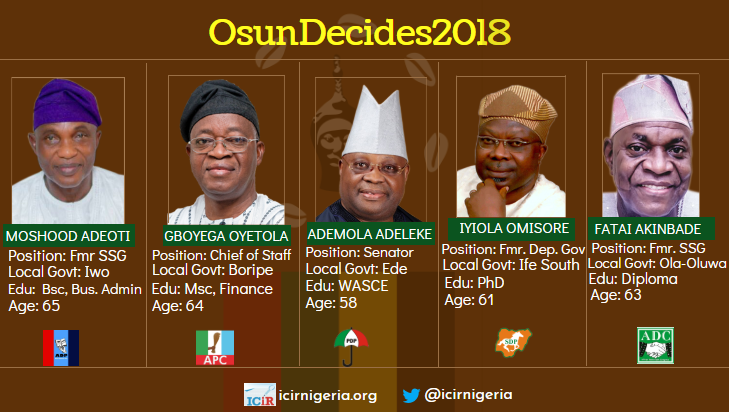 EXACTLY a week from now, the electorate in Osun state will go to the polls to elect the governor for the next four years.

The September 22nd election will be the fifth consecutive governorship election to be held in the state since the return of democracy in 1999.

Chief Adebisi Akande was the first elected governor in 1999. He contested under on the platform of the Alliance for Democracy (AD). In 2003, Chief Olagunsoye Oyinlola was elected on the platform of the Peoples Democratic Party (PDP), he was re-elected in 2007. The 2007 election rigged against the opposition Action Congress (AC) was contested at the tribunal and won by Ogbeni Rauf Aregbesola. On 26th November, Aregbesola was declared the winner of the April 14, 2007 governorship election. He was re-elected on August 9, 2014.

The Independent National Electoral Commission (INEC) has presented the names of 48 political parties cleared to contest for the election in Osun State.

Although there are 48 parties and thus 48 governorship candidates, The ICIR have identified five of them as major contenders. They are a former secretary to the state government, Fatai Akinbade of the ADC; immediate past secretary to the state government, Moshood Adeoti of the ADP; the candidate of the governing APC, Adegboyega Oyetola; a senator, Ademola Adeleke of the PDP; and a former senator, Iyiola Omisore of the SDP.

Fatai Akinbade was born in April 1955 in Ogbaagbaa, a town in Ola-Oluwa Local Government Area. He has a Diploma in Civil Engineering. In 2003, he was appointed Secretary to the state by Olagunsoye Oyinlola. Fatai Akinbade is contesting on the platform of the African Democratic Congress (ADC).

Moshood Adeoti was born in Iwo, headquarters of Iwo Local Government Council Area of the state on February 27, 1953. He is a graduate of Business Administration from the University of Benin. After holding several political positions both in government and at party levels such as the State Chairman of Action Congress of Nigeria (ACN) a precursor of APC, Alhaji Moshood Adeoti was appointed as the Secretary to the State Government of Osun in January 2011 by the incumbent Governor Rauf Aregbesola-led administration. He is contesting on the platform of the Action Democratic Party (ADP).

Adegboyega Oyetola was born in Iragbiji, Boripe Local Government Area of Osun. He is a graduate of the University of Lagos with a B.Sc degree in Insurance and Master of Business Administration(MBA) in Finance. He is currently the Chief of Staff to the Governor of Osun state. Gboyega Oyetola is contesting on the platform of the All Progressives Congress (APC).

Ademola Adeleke was born on 13th May 1960 in Enugu. He hails from Ede, Ede local government of Osun state. He holds a secondary school leaving certificate (WASCE). He is currently the senator representing Osun West senatorial district at the Senate. He is the candidate of the Peoples Democratic Party (PDP) for the governorship election.

Iyiola Omisore was born on 15th September 1957. He hails from Ife South Local Government Area of Osun State. He holds two engineering degrees, a postgraduate certificate and a PhD in Infrastructure Finance. Omisore served as Deputy State Governor of Osun State from 1999 – 2003 under Governor Adebisi Akande. He was elected to the Senate to represent Osun East constituency in 2003 running on the platform of the PDP and served till the expiration of his term in 2007. In 2007, he was re-elected as a Senator. Omisore is contesting on the platform of the Social Democratic Party (SDP).