A leading child rights organisation, Save the Children, says pneumonia is killing one child every three minutes in Nigeria, which amounts to a total of 480 children in a day nationwide.

The organisation also disclosed that Nigeria has the highest number of pneumonia deaths globally, as the disease claimed the lives of 162,000 children in Nigeria under the age of five in 2018.

Pneumonia, which is caused by bacteria, viruses or fungi, and leaves children fighting for breath as their lungs fill with pus and fluid, is now a leading killer of children in Nigeria, causing 19 per cent of under-five deaths.

Kevin Watkins, Chief Executive of Save the Children, the UK who disclosed these numbers at a press conference on Monday to commemorate this year’s World Pneumonia Day, said pneumonia is a leading killer of children in Nigeria, causing 19 per cent of under-five deaths.

Nigeria ranked second behind India in 2017 with 132,556 number of under-five deaths from children while India topped the world with a total of 178,717 children deaths.

He called on the Federal Government to urgently commit new resources to tackling the deadly disease. 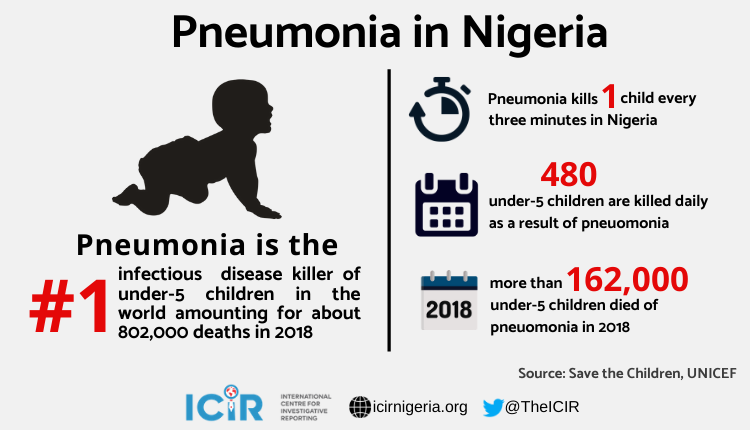 He explained that children with immune systems weakened by other infections or by malnutrition and those living in areas with high levels of air pollution and unsafe water are at far greater risk.

Watkins added that recent analysis found out that Nigerian children born in the poorest households were nearly three times more likely to die from diseases like pneumonia before their fifth birthday, compared to the richest children.

He noted that the picture is starkest in Zamfara State, where children are five times as likely to die before the age of five compared to children from Kwara State.

Watkins said that most pneumonia deaths can be prevented with vaccines and easily treated with low-cost antibiotics, such as Amoxicillin DT.

He, however, lamented that millions of children are missing out on both more than 40 per cent of one-year-olds in Nigeria are unvaccinated and three in four children suffering from pneumonia symptoms do not get access to medical treatment.

Watkins said it was time for government, United Nations and multilateral agendas, companies and Non-governmental organisations to join forces to light pneumonia and protect these children.

According to him, “This is a forgotten global health epidemic that demands a greater international response. Millions of children are dying for want of vaccines, affordable antibiotics, and routine oxygen treatment. The pneumonia crisis is a symptom of neglect and indefensible inequalities in access to health care.”

Deirdre Keogh, Save the Children Country Director, said that the organisation was collaborating with the Every Breath Counts (EBC) Coalition, supported the federal government in the development of the National integrated Pneumonia Control Strategy, stressing that it was an important step in addressing pneumonia.

Also, Save the Children UK Ambassador, Florence  Otedola, also known as DJ Cuppy, said Nigeria spent just $10 per person on health care in 2015, which she said was far below the $86 minimum level recommended by the World Health Organisation.

“We can all do our part in making sure the children of Nigeria do not die from pneumonia. lnvite us to come together and invest in providing treatment to every last child who deserves to survive this preventable disease.”