A heavily pregnant Nigerian woman and 174 minors are among 444 shipwrecked migrants rescued off the coast of Libya in the last 11 days by a German charity boat – Sea Watch 3 – in eight separate operations.

The pregnant woman, who is almost due to give birth, was evacuated from the Sea Watch 3, which is located some 18 miles from the coast of Lampedusa, because she needed urgent medical attention due to complications from the wreck.

Transit camp for rehabilitation of migrants, IDPs opens in Lagos

Together with her three-year-old daughter, she disembarked from a coast guard cutter at the Madonnina pier and was taken to the island’s health centre and then by helicopter to the hospital.

Geo Barents ship run by Doctors Without Borders said in a statement that the youngest among the many unaccompanied rescued children was two weeks old.

“They were fleeing in an overcrowded rubber dinghy because Europe left no other option. They were rescued, are safe on board the Sea-Watch 3. Thousands of others had to pay the search for safety with their lives. We need safe and legal escape,” @seawatch_intl tweeted. 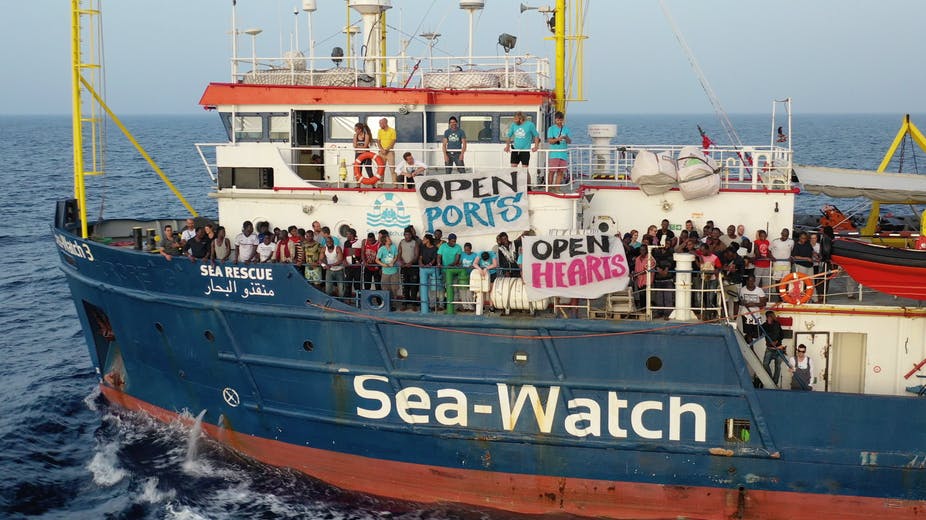 The charity group had requested a ‘port of safety’ for its 444 guests on-board who were exposed to wind and weather and Italy on Tuesday allowed Sea Watch 3 to dock in the Sicilian port of Augusta, with another vessel waiting offshore for permission to bring 440 more to land.

“The assignment of a port of safety is not a gesture of special generosity. The relevant authorities must fulfil the duty to do so immediately,” the Charity added.

There has been a sharp increase in boat migrants into Italy in recent months with the government struggling to secure an agreement with European Union partners over how to deal with the influx.

Chat us on WhatsApp
Advertisement
Previous articleMan narrates how he was kidnapped, extorted N550,000 by Abuja Police
Next articleUNESCO seeks nominations for World Press Freedom Prize