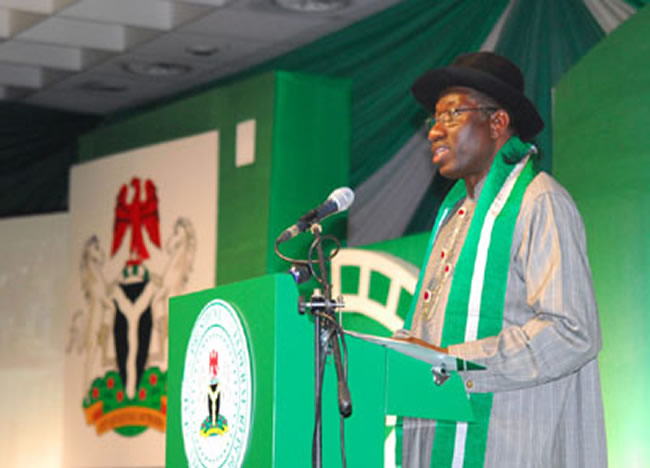 President Goodluck Jonathan has set up an advisory committee to establish modalities for a national dialogue aimed at resolving issues that currently heat up the polity and urged Nigerians to remain fully committed to building a strong, united, progressive and prosperous nation.

Jonathan, who made the announcement during a broadcast to mark the Independence Day celebration on Tuesday, said that the decision to set up the committee was motivated by suggestions from various stakeholders who believe that a national conference would help resolve some of the issues threatening to divide the country.

“Our administration has taken cognizance of suggestions over the years by well-meaning Nigerians on the need for a national dialogue. When there are issues that constantly stoke tension and bring about friction, it makes perfect sense for the interested parties to come together to discuss,” he said.

The committee which is expected to design a framework and come up with recommendations as to the form, structure and mechanism of the process, has been given one month to complete its assignment.

Femi Okurounmu is to chair the committee, while Akilu Indabawa will serve as secretary. Others members are yet to be announced.

Speaking on the state of the nation at 53, Jonathan noted that Nigeria is still a work in progress and tasked all Nigerians irrespective of ethnic, religious or political differences, to rise up to the challenge to keep building in spite of the various obstacles faced.

“If we look back over the years, we can confidently say that there is every reason to celebrate. The past 53 years have seen Nigeria evolve on an epic scale. History has proven that nations take time to evolve. We should rejoice in our democracy because it enables us to be united by our differences, not destroyed by them. And there is no more crucial time for us to be united than now,” he admonished.

He continued: “The threats we face may be real and immediate. But we are not alone in this regard. It is a difficult season for much of the world: industrialized or developing; rich or poor. What matters are the lessons we learn, the wisdom we demonstrate, and the victories we snatch from the jaws of possible defeat.”

Against the background of recent terrorist atrocities in the country, President Jonathan reaffirmed the federal government’s commitment to taking all necessary action to bring the war against domestic terrorism to a successful conclusion as quickly as possible.

“My heart goes out to the families of all those who have fallen victim of these dastardly acts. Our Administration will not rest until every Nigerian is free from the oppression of terrorism. I reassure you that no cost will be spared, no idea will be ignored, and no resource will be left untapped in the quest to enable our people live without fear,” he promised.