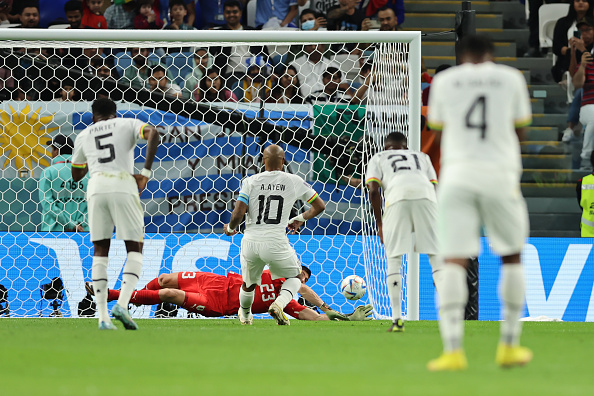 In 2010, the Black stars were memorably knocked out of the quarter-finals of the 2010 edition of the FIFA World Cup by Uruguay. In that game, Luis Suarez, who contributed to two goals today, blocked a game-winning shot with his hand in the final minutes of the extra time—the second ‘hand of god.’

Asamoah Gyan stepped up for the penalty but ballooned it into the crowd behind the goalpost, after which he vowed not to take another penalty.

Suarez was Uruguay’s self-proclaimed hero that day, claiming, “I made the save of the tournament,” and his actions sparked a decade-long cross-Atlantic rivalry. While he contributed to Uruguay’s goals today, they were ultimately not enough to see his side through. Korea Republic’s 2-1 win over Portugal in the other group game knocked out Ghana and Uruguay.

Both teams came into the game needing a victory to give themselves a chance of qualification.

It seemed like Ghana would draw first blood after starlet Mohammed Kudus took a deft touch over goalkeeper Sergio Rochet and won a penalty. After a lengthy video assistant referee (VAR) review, Andre Ayew took even longer before striking the ball from the penalty spot. Like Gyan in 2010, the pressure caught up, and he scuffled his chance.

Gyan, who was on punditry for the game, expressed his condolences after history repeated itself. In reality, the miss also meant that his failures from 12 years ago would continue to occupy Ghanaian minds for another few years.

The miss unnerved the Black Stars players, and their defensive lines lost structure. Uruguay exploited the gaps; Luis Suarez’s fired a shot that Lawrence Ati Zigi parried into the path of a perceptive Giorgian de Arrascaeta. The Uruguayan followed through and poked the ball in at the goal line.

A few moments later, Suarez drew blood again. His intricate combination with de Arrascaeta gave the latter a chance to volley home his second for the game. Jordan Ayew grabbed all the attention after his possession loss at the center of the pitch led to the goal: his third error leading to a goal in the tournament.

The rest of the game played out at a snail’s pace, with neither team having the delicacy or energy to string a decent move together.

After word broke about Korean Republic’s exploits against Portugal, Uruguay needed to score another to qualify. Unfortunately for them, that goal never came.

Ghanaian fans rejoiced after the broadcast cameras captured Suarez’s tears on the bench. Their cries and celebrations erupted, and despite the results meaning an early departure for them, their sorrows were soothed.

Both teams left the game disappointed, but Ghana’s revenge, albeit diluted, still came.