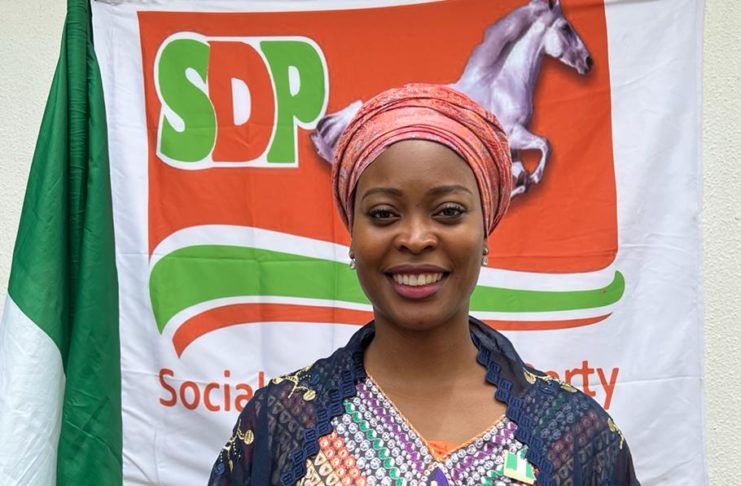 KHADIJAH Okunnu-Lamidi, one of the female presidential aspirants on the Social Democratic Party (SDP) platform, has denied being disqualified by the party’s screening committee.

Okunnu-Lamidi was one of the first females to declare her interest in contesting for president of Nigeria in the 2023 general election.

She declared her interest in January 2022.

Insecurity: Female presidential aspirant says she will recruit more women into army, others

Reports had said she had been disqualified on Friday alongside an unnamed female aspirant by the Tunde Adeniran-led panel, ahead of the party’s presidential primary election on Wednesday,  June 8, 2022.

But in a chat with The ICIR, Okunnu-Lamidi denied the disqualification report.

She declared she was still very much in the race.

She blamed the false reports on the handiwork of her political enemies, who felt threatened by her “rising” profile.

“There is a lot of disinformation from persons and camps who seem afraid they cannot win.

“As it stands, three aspirants are cleared to contest in tomorrow’s convention: two women and one male. The real question is, in whose interest is it to target two qualified, ethical and competent candidates who so happen to be the women?

“It is the two females who are targeted by smears and lies. The female vote is more important than that to our party. We are in this to contest with integrity.

“We are running with money that can stand to be accounted for. We shall not spread lies or belittle this opportunity to champion sincere and collective change,” Okunnu-Lamidi stated.

She added that women should be given equal opportunity to aspire for any position.

Other aspirants vying for the party’s presidential ticket are Adewole Adebayo and Cesnabmihilo Dorathy.

Chat us on WhatsApp
Advertisement
Previous articleAny attempt to exclude me from primary is recipe for bigger trouble for the party – Yahaya Bello
Next articleAPC presidential primary: ‘We want at least two names on each ballot paper’ – Official