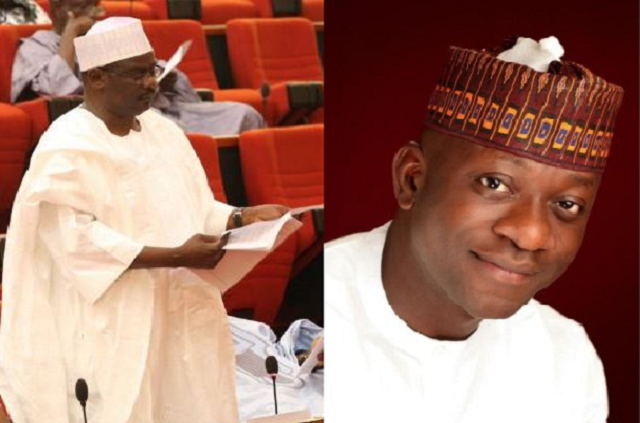 The Senate has recalled Ali Ndume, its former Majority Leader, who was suspended for 90 days following allegations against Bukola Saraki, the Senate President and Dino Melaye, Chairman of the Senate Committee on the FCT.

Meanwhile, Abdulmumin Jibrin, former Chairman of the House of Representatives Committee on Appropriation, is yet to be recalled to the House more than one year after he was suspended.

Jibrin was suspended for 180 legislative days in September 2016 after he accused Yakubu Dogara, Speaker of the House, and other principal officers of budget padding.

The decision to recall Ndume was taken at a closed-door session of the Senate on Tuesday, presided over by Ike Ekweremadu, Deputy Senate President.

This is coming few days after the Federal High Court, Abuja declared Ndume’s suspension illegal and ordered that all his outstanding salaries and allowances be settled.

“In the closed door session, the senate also discussed the suspension of Ali Ndume and resolved that he should resume sitting in Wednesday 15th November 2017 since he has served his suspension of 90 legislative days without prejudice to the current court processes.”

Ndume was suspended for allegedly embarrassing Saraki and Melaye after he requested for an investigation into certain allegations against the two lawmakers.

Saraki was said to have imported a bullet-proof car into the country without paying the appropriate import duty and as a result, the car was impounded by officials of the Nigeria Customs Service.

Melaye, on the other hand, was accused of parading a forged certificate from the Ahmadu Bello University, Zaria, when he did not actually graduate.

However, a Senate committee was set up to look into the allegations and both Saraki and Melaye were cleared.

But while Ndume is being recalled unconditionally, the leadership of the House of Representatives is insisting that Jibrin must tender an apology letter before his suspension would be lifted.

“Jibrin will also have to notify the House. He will write an apology letter too. You know there are other conditions he will have to meet to complete the procedure,” said Abdulrazaq Namdas, Chairman of the House Committee on Media and Public Affairs, during a press briefing in September.

Jibrin, for his part, says he cannot apologise as that would mean that he is withdrawing his allegations against Dogara and others.

He wants the country’s anti-corruption agencies to conduct an independent investigation into the issues he raised.

1 year today of denying my constituents representation in the House and 1 year taken off my 4 year CONSTITUTIONAL mandate…ONLY IN NIGERIA! pic.twitter.com/ofxnyoOLS5

We have so far served 14months in suspension. However slowly, surely justice will come for me and my people. I wish to thank my constituents for their patience and keeping faith. The experience of last 14months has turned out to be probably the best I have had in my entire life.