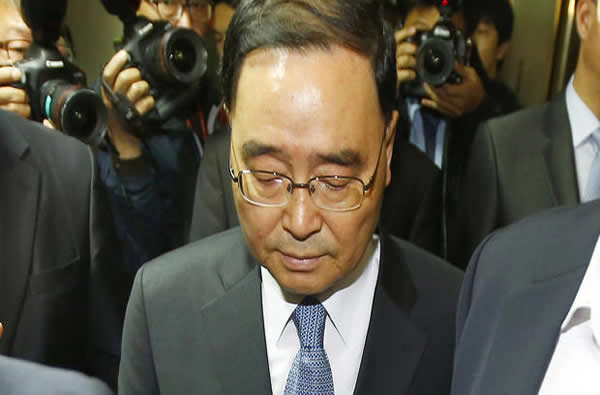 A somber-looking Chung announced his resignation in a brief televised address Sunday morning, saying “keeping my post is too great a burden on the administration.”

The Prime Minister’s position in South Korea is largely ceremonial, with the president wielding most of the power.

Chung said he would like to offer an apology to the people as a representative of their government, for not being able to solve the many problems that occurred in the process of preventing the incident, the initial response, and in controls afterwards.

He, along with the Coast Guard chief, was in charge of the rescue operation and says his resignation would be a sensible way to offer the people of South Korea an apology.

Opposition politicians criticized the Prime Minister’s offer to resign as irresponsible and demanded President Park Geun-hye be the one to apologize.

But most of South Korea’s outrage is directed at the captain and crew in charge of steering the ship, who have been arrested and charged with negligence and violating maritime law for telling passengers to stay put and then later saving themselves.

President Geun-hye’s office said she has accepted her prime minister’s resignation, but not until the Sewol ferry disaster has been brought under control.

The 5-story ship, the Sewol, capsized on April 16th southwest of mainland South Korea with 476 people on board and quickly sank.

Most were teenagers on a trip organized by their high school, just south of Seoul, to the resort island of Jeju.

Authorities were severely criticized for what many saw as a slow and poorly coordinated initial response to the disaster.

Inaccurate information on the numbers of rescued, passengers and missing made matters worse for already distraught parents.

Education authorities initially indicated most of those on board the sinking ship were rescued before corrections revealed the scale of the loss.

Hundreds of rescue divers were deployed but were hampered by weather, strong currents and poor visibility. Relatives of those on board, hoping for survivors, watched helplessly as it took days to get divers inside the sunken ship.

Bodies were still slowly being recovered more than a week later as bad weather continued to plague recovery efforts.

It is still not clear what caused the ferry to sink. Investigators are looking into many possibilities including an alleged sharp turn, design or repair flaws, or overweight cargo.