Their pains, frustration in the hands of Lagos Okada riders (PART 2) 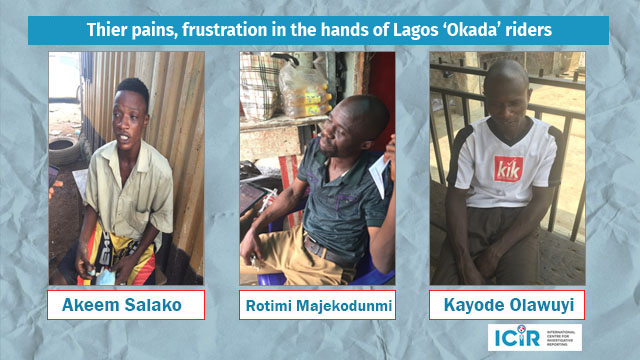 Lagos is Nigeria’s commercial centre. With a population of over 14 million persons, the state has been dogged with the challenges of Okada-related crimes. At different times, the Lagos state government had threatened to ban the use of Okada in the state due to insecurity associated with the operation of motorcycle taxis in the state. This is part of two of ‘”ow Okada riders cause disability, promote crime in Lagos”. Olanrewaju OYEDEJI reports. 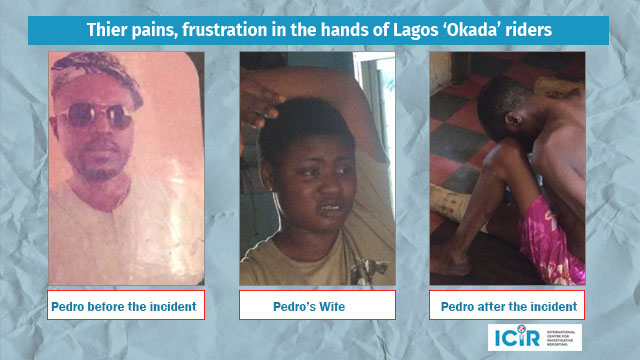 Pedro Lives in Ikola, Lagos state. He was involved in an accident with a hit and run dispatch rider at Victoria Island also in Lagos. He is currently bed-ridden and cannot afford hospital bills. 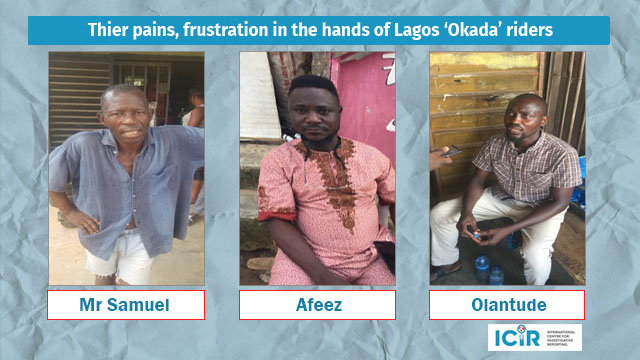 Mr Samuel‘s three-bedroom flat was robbed by men on a motorcycle in Lagos. They came at night, carted away his money, six phones and wife’s jewellery.

The okada riders told Samuel that they have been surveying the place for a while. He however did not suspect much because he could not distinguish criminals on motorcycles from those who are not criminals. The situation has made him more scared of Lagos.

How Okada riders cause disability, promote crime in Lagos (PART 1)

Money for the boys: How ‘agberos’ pocket billions of Lagos transport revenue

Afeez lives in Ijaiye area of Lagos state and is one of the union leaders in Ijaiye. He lost a close friend to a hit and run Okada rider.

Olatunde narrated how a young lady’s bag and the phone was snatched right in his presence via a motorcycle. According to him, he tried to call attention to the motorcycle rider but he was fast gone. He said the lady was shell-shocked and could not say anything for minutes

Akeem’s friend lost his leg during a motorcycle accident in Lagos.

Rotimi Majekodunmi told this reporter that more than once, he had witnessed scenes where people are left crying and stranded after their valuables were snatched in Agege area of Lagos. He noted that it has become very rampant that people sometimes fear plying the area anytime from 7 pm. He urged the state government to help safeguard people and their properties against criminal elements who operate through motorcycles in the state.

Kayode Olawuyi has worked in Lagos for over twenty-five years. He recounted several incidents of bag snatching, phone snatching that sometimes leaves victims stranded. He said they have tried endlessly to fight this menace but the crimes never stopped. 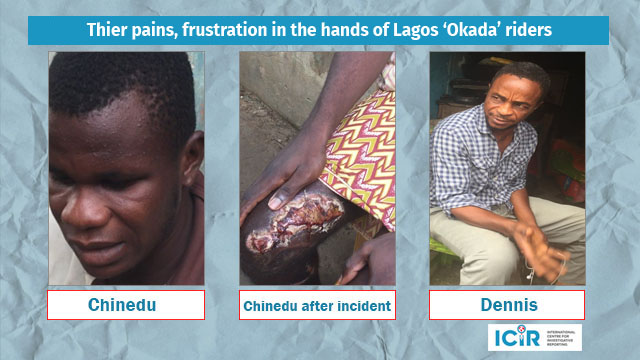 Chinedu was working in a car wash close to his house as of September 2021. However he wanted something that could fetch him more funds, so he started Okada riding business. Two days after starting the ‘Okada’ business in Lagos, he was hit by a vehicle. His condition has continued to degenerate as is unable to use his legs till date.

“I saw that a road was free and wanted to take it but got knocked down.” He has been debilitated since then. Close friends described the incident as devastating, and have been praying for him to regain his legs.

Dennis –  A close person to Dennis lost one of her legs after hit and run motorcycles hit her and dispossessed her of her bag. Dennis himself had a close shave with Okada accident recently, he told The ICIR. 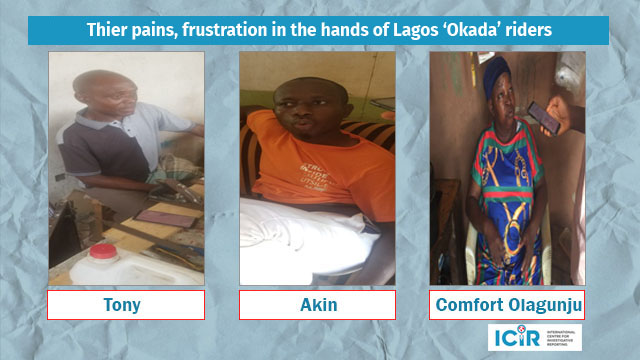 Severally, Tony has reported crimes by Okada riders, including those he sees from his place of operation but he says nothing has changed. He told his reporter that his friends have been victims of Okada crimes and every time he voices out. As someone who operates close to the expressway, he says criminal activities go on unchecked.

He narrated an incident of how road transport union leaders made attempt to ease off motorcycle riders from the area but the next day, the motorbike riders were back. According to him, even policemen or taskforce cannot help the situation.

Akin has been a witness of many incidents of robbery through armed robbery in Lagos. He narrates the psychological fear it creates always even in him.

Comfort Olagunju sat on a chair, unable to stand when she saw this reporter. She was hit by a motorcycle rider in the Iyana-Ipaja area of Lagos but she was lucky to escape more fatalities as she was rushed to get medical care. 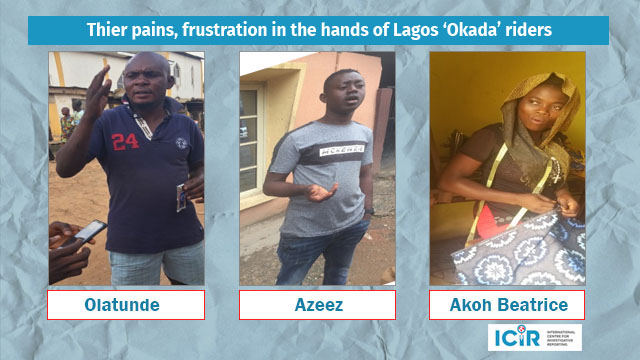 Olatunde said that he lost a friend to activities of motorcycle riders in the state. He however opined that despite the criminality, there is a need to ensure that alternatives are provided before phasing off motorcycles. He believes that hunger and unemployment should be a priority as a way to ease the state of crimes.

Azeez told this reporter that phasing off motorcycle riders in the state will be a welcome development due to crime. He however noted that they should still be allowed to operate inside the streets of Lagos.

Akoh Beatrice told this reporter that going out at night is always scary because of thefts perpetrated by motorcycle riders in her area. 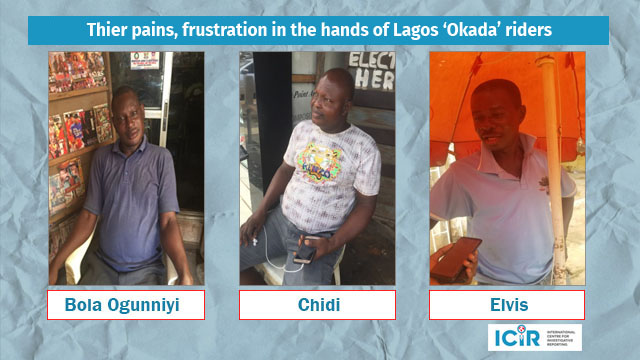 Bola Ogunniyi said that his area has been terrorized by Armed Robbers who leverage motorcycles. He however called on the government to find alternatives so as not to increase criminality in the state.

Chidi revealed that in his area, a time limit is placed to entrant of motorcycles due to an increase in criminality leveraging on motorcycles.

Elvis noted that while many persons. 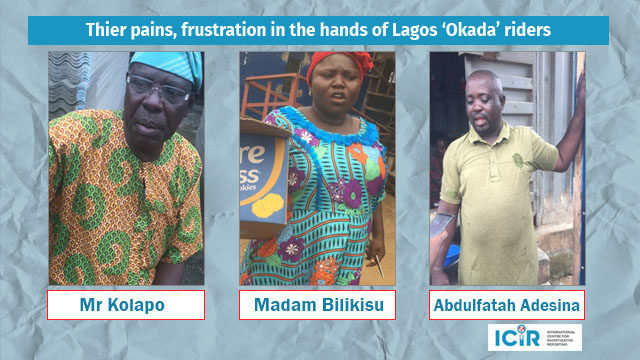 Mr Kolapo said that the menace of Motorcycle riders has become very rampant in the state and even his area is not spared.  He believes that the lack of regulation and coordination on motorcyclists in the state enhances criminality. He also wants employment to be created for those who ride motorcycles in the state, so the criminality will not be on the increase.

Bilikisu told this reporter that she has family members using motorcycles to survive. Although, admitting to the crime perpetrated.

Abdulfatah Adesina, a mechanic in Lagos state, told this reporter that the menace of Motorcycle riders has become very worrisome, however, infiltration and poor regulation enhances criminality. He recounted incidences including how his close family lost valuables to the hands of motorcycle riders. 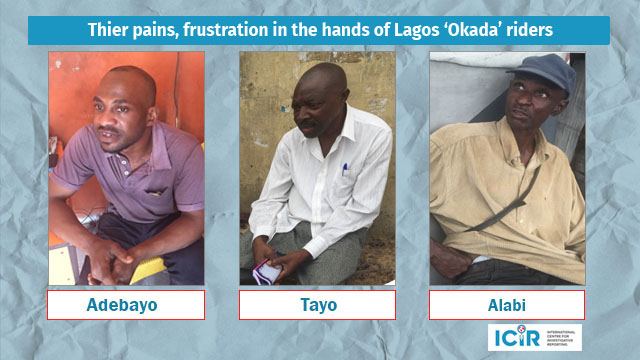 Tayo recounted how the phone of a young lady was snatched right in front of him and the thieves zoomed off on their motorcycle. And Alabi shared a similar experience, worried that Okada riders contribute to the high crime rate in Lagos. 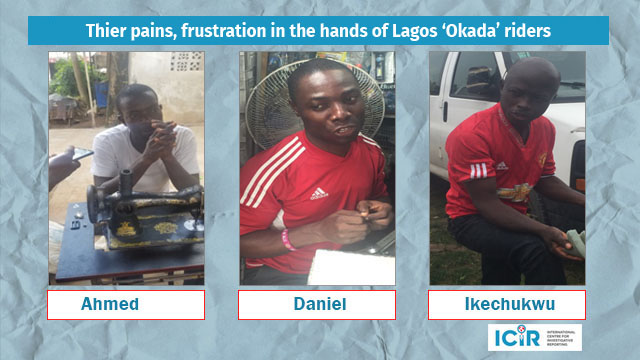 Ahmed has not been a victim of Okada crime but some of his customers have fallen victims in the past.

Daniel, in his workplace, has seen many incidences of bag snatching and others committed by motorcycle riders but believe an alternate to motorcycle should be provided before banning even as he advocated for regulating Okada business in Lagos. 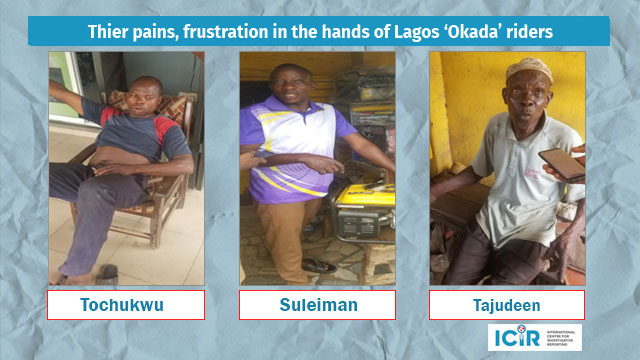 For Tochukwu, there is a need to curb Armed Robbery in Lagos especially those perpetrated by motorcyclists. He stated that those robbers have made the roads scary; however, before removing them from the roads, an alternative should be created.

Suleiman noted that Okada has been of help to him in Lagos. He noted that sometimes when they close late in Lagos, he uses the means of transportation for faster access. Suleiman pleaded that while some elements have used motorcycles for fraud, there is a need to ensure alternative jobs, so as not to embolden fraud and criminality.

Tajudeen said in his many years of staying in Lagos, he has seen countless cases of armed robbery, and there wants the government to strengthen laws on Okada operations. He lamented the loss of jobs and the high rate of unemployment that promote criminality in Lagos.  This condition makes many armed robbers disguised as motorcycle riders in the state. 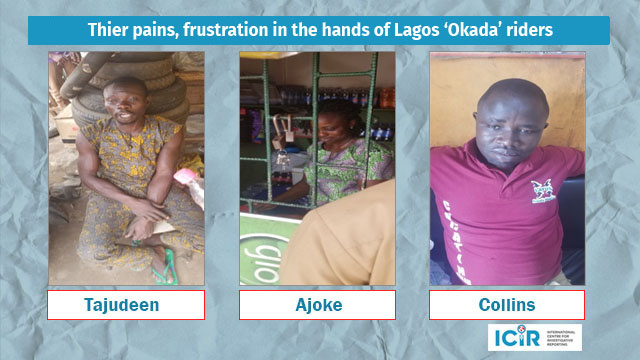 Kehinde has witnessed many crimes but he says the absence of a proper security system emboldens criminals who operate through motorcycles.

Collins told The ICIR that Okada has become a menace in Lagos but the absence of alternative remains why many persons patronise them. He noted that many persons have been made to cry due to the activities of Okada riders but even as they are a thorn in the flesh of Lagosians, there is a need to also consider their survival before taking them off the streets. 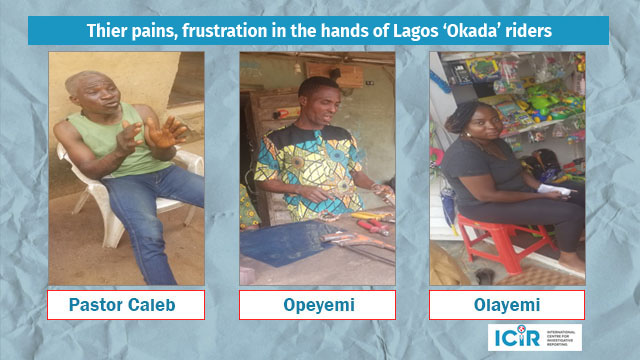 Pastor Caleb urged the state to find ways of compensating those who will lose their jobs if Okada is phased out, he noted that many persons who engage in Okada riding are graduates struggling for survival.

Opeyemi works in a furniture shop in Lagos, he told this reporter that the Okada menace did not start ‘today’ in Lagos. He believes that there is a need for employment opportunities to be created as a way to ease the state of criminals.

Other Lagosians also told The ICIR that while the menaces of Okada crimes have become very worrisome in the state, there is a need to ensure adequate tracking of those who operate Okada as taxi in the state. They want Lagos to ban the Okada riding, but not without providing alternatives both for the commuters and the operators. 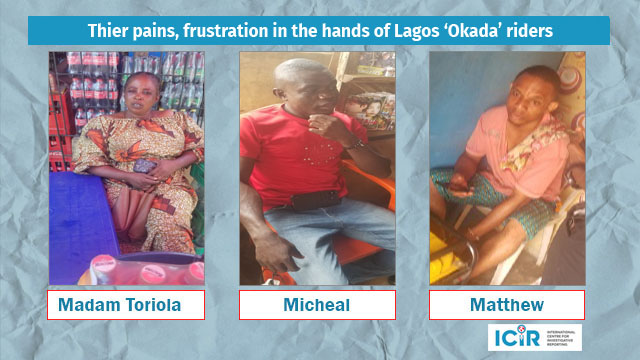 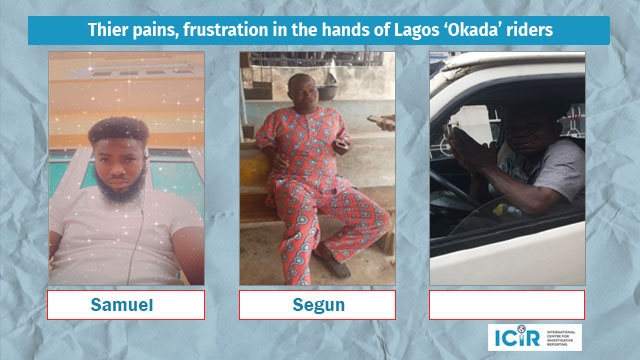 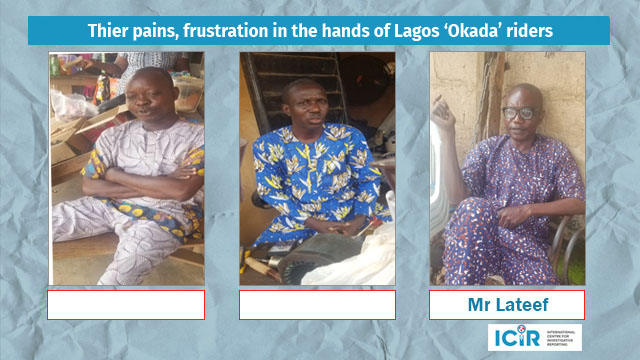 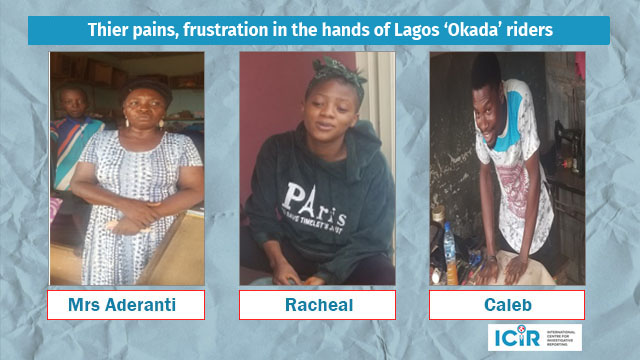 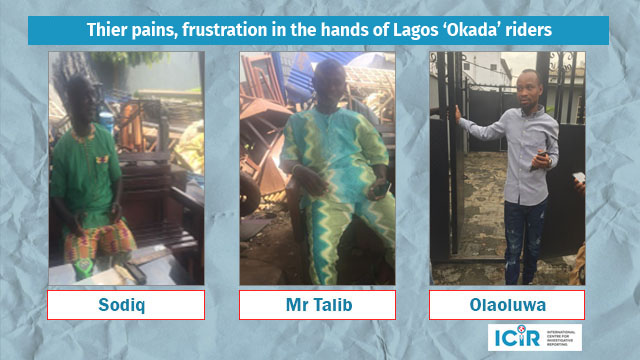 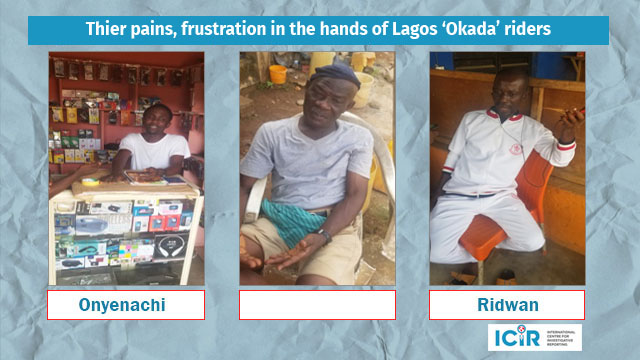 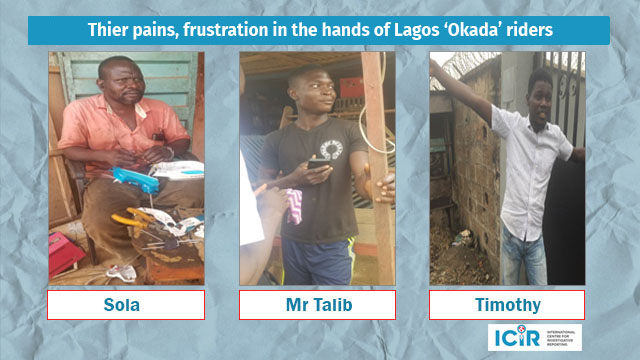 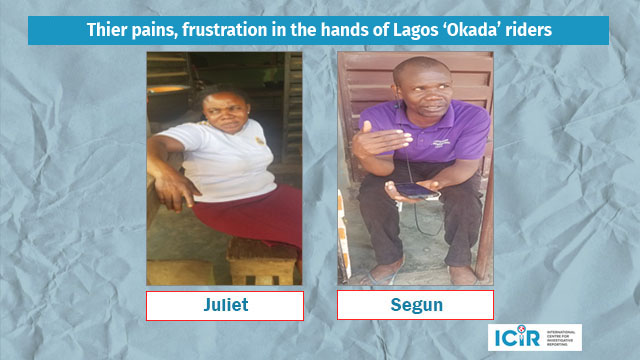 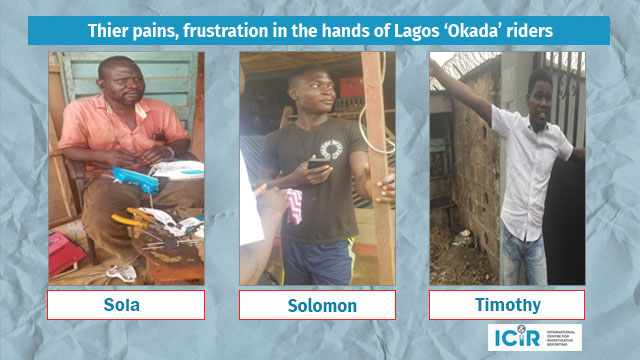