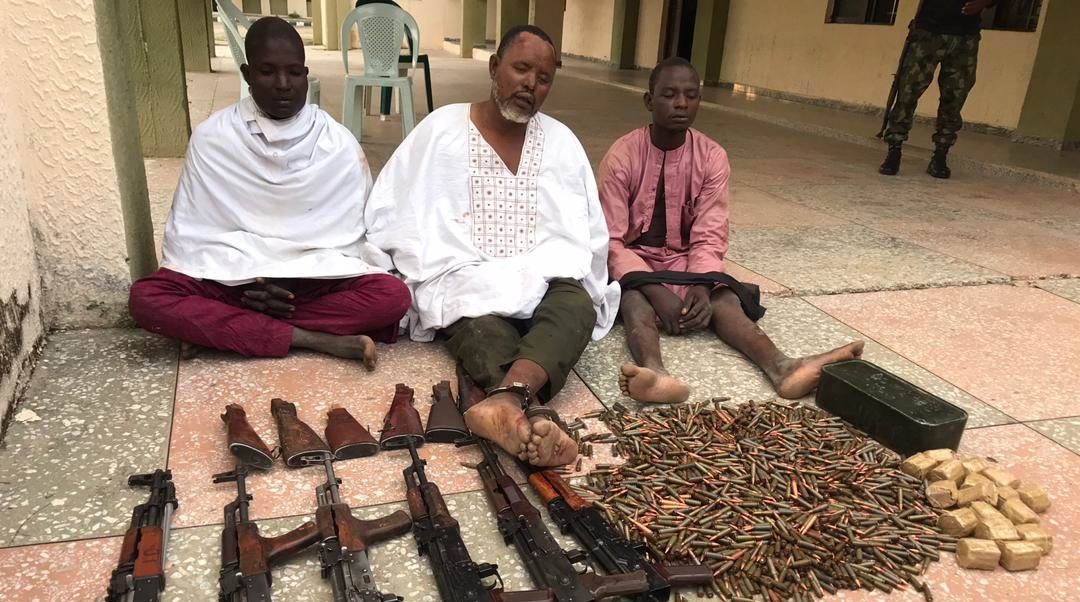 THE Nigerian Army says its troops have nabbed three Nigerien nationals for massive illegal arms supply to bandits in the North West of the country.

According to a press statement by Benard Onyeuko, acting Director Defence Media Operations, the arrest was made by troops of Operation SAHEL SANITY deployed at Forward Operating Base, Sabon Birni Local Government Area of Sokoto State on August 15.

“In what could be described as an unprecedented stride, gallant troops of Operation SAHEL SANITY deployed at Forward Operation Base Sabon Birni LGA of Sokoto State on 15 August 2020 after a painstaking undercover operation successfully smashed a notorious illegal arms smuggling syndicate who specialize in massive arms supply to bandits in the North West from across the international borders,” said Onyeuko, a Brigadier General.

The Army spokesperson stated the arms dealers whom he identified as Adamu Alhassan, Salisu Adamu and Abdullahi Sani, carried out their nefarious activities using the international land borders.

He added that the troops recovered six AK 47 Rifles, three AK 47 Rifle magazines and 2,415 rounds of 7.62mm special ammunition deceptively concealed in various parts of their vehicle, adding that preliminary investigation revealed that the consignments were meant for some bandits in Isah Local Government of Sokoto State.

“The trio of Alhaji Adamu Alhassan, Salisu Adamu and Abdullahi Sani (all Nigerien citizens) were intercepted by the eagle eyed troops at Dantudu in Mailailai District of Sabon Birni LGA of Sokoto State with 6 AK 47 Rifles, 3 AK 47 Rifle magazines and 2,415 rounds of 7.62mm Special ammunition deceptively concealed in various parts of their vehicle,” he said.

“Preliminary investigation reveals that the dangerous consignment was meant for some bandits in Isah LGA of Sokoto State which could have led to loss of thousands of innocent lives but for the swift interception by the vigilant troops.”

The Brigadier General disclosed that  one of the arrested arms suppliers, Adamu Alhassan who is diabetic and hypertensive experienced seizure and gave up the ghost while he was being rushed to the hospital.

He, however, noted that investigation of the other two accomplices continues in order to track and arrest all those in the chain of the heinous activity in collaboration with other intelligence and security agencies from our neighboring countries.

The exercise, according to him was part of the efforts of the Nigerian Army to rid the North West of the country of banditry currently ravaging the region.

How corruption, questionable contracts led to the collapse…

Lai Mohammed did not lie; superpowers are not selling arms…