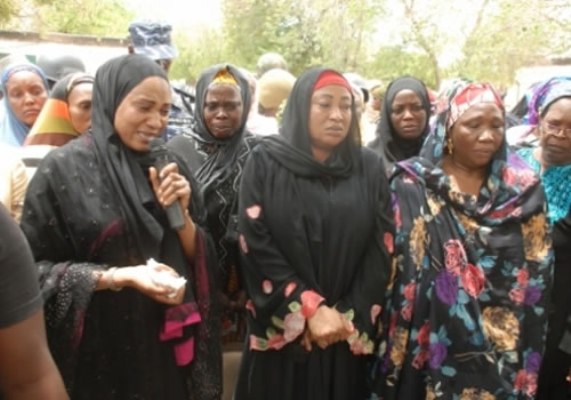 Indigenes of Chibok yesterday rejected the gesture of the federal government to reconstruct Government Secondary School, Chibok where over 200 schoolgirls were abducted on April 14, 2014, insisting that the liberation of the abducted schoolgirls should remain the top priority.

Addressing over a thousand indigenes of the town at a press conference in Maiduguri, the Borno state capital, in reaction to the recent surprise visit of a federal government delegation led by Minister of Finance, Ngozi Okonjo-Iweala, the caretaker chairman of Chibok Council Area, Ba’ana Lawan, who spoke on behalf of the Chibok community berated the federal government for neglecting the parents and relatives of the abducted schoolgirls.

“It is disheartening to inform you that since the abduction of these girls, the federal government did not bother to send delegations to Chibok to sympathize with the parents, instead, the parents were invited to Abuja and conveyed in cargo military plane with no comfort whatsoever,” he said.

“We still observed that recently President Goodluck Jonathan visited Mubi and Baga, but failed to visit Chibok to sympathize with our people,” Lawan said.

Expressing dismay over the federal government’s move to rebuild Government Secondary School, GSS, Chibok, which was destroyed by the insurgents during the abduction of the schoolgirls, Lawan asserted that the priority of the federal government should be the liberation of the schoolgirls from forced captivity and not  the rebuilding of the destroyed school.

According to him, the traumatized parents and the entire people of Chibok community only want their children back home.

The caretaker chairman of the local government area also accused the federal government of several broken promises of rescuing the over 200 abducted schoolgirls.

“We also observed that the President and Chief of Defence Staff, Air Vice Marshal Alex Badeh, had severally promised that these girls will soon be released, but is it is now more than 300 days, and we are yet to see our children back at home.

“We thank God and appreciate Governor Kashim Shettima and his wife, Nana Kashim Shettima who did not only visit Chibok when the incident took place, but also secured admission for 59 schoolgirls that escaped from Boko Haram captivity to study in various schools in the country and for all the other assistance the couples have rendered to the parents,” he said.

He also lamented the spate of attacks by the insurgents, stating that Chibok local government area had witnessed six different attacks by insurgents where no less than 300 people were murdered and property worth millions of naira destroyed.

He wondered why the federal government had been reluctant to acknowledge or respond to the community’s plight especially with the most recent attacks on Gatamwarwa, Kautikari and other surrounding villages where several lives were equally lost.

Lawan said the community condemned the federal government’s decision to reconstruct the school where the girls were abducted when it had failed to fulfil any of its numerous promise of returning the girls.

He communicated the Chibok community’s appreciation for the persistent efforts of the Abuja-based Bring Back Our Girls group which have been relentless in their call on the federal government to intensify efforts to rescue the abducted schoolgirls.