We will never allow this type of EndSARS protests again, says IGP Adamu

Muhammad Adamu, the Inspector-General of Police, has said that the force would never allow the type of the recent ENDSARS protests in the country again.

Adamu said this on Friday while responding to questions during a meeting with command commissioners of police in Abuja on Friday.

“We will never allow this type of #EndSARS protests again, it was violent. Peaceful protest is allowed in our constitution. When these rallies started peacefully, we provided security for them,” said Adamu.

The IGP added that the protest was being held peacefully and until it turned violent and the protesters attacked the people (police) that were protecting them.

“We were moving with them to make sure they were not molested by any group of people and it was going on well until it turned violent.

“When it turned violent, they then attacked the people that were even giving them protection. So, we shall never allow any violent protest in this country again. When you talk of peaceful protests, yes, it is allowed but violent protests, never,” the IGP stated.

He stated that many of the masterminds of the violence that rocked the #EndSARS protests had been arrested including inmates who escaped from Edo Correctional Centre while calling for the assistance of Nigerians to apprehend other escaped inmates.

“We have made a lot of arrests of those people that escaped from prisons. Some were even arrested in Kano and Kaduna. When they escaped, some of them went back to their business of robbery.

“And the cultists, when they escaped, they went back to the business of cultism, especially in Edo. We’ve been able to arrest a significant number of them and we are still after those that are outside.

“We call on Nigerians, any information you have about an escapee from any of the correctional centres, please inform us or any other security agencies, so that we can get them back to prison,” he stated.

However, in contrast to the IGP’s claim that the ENDSARS protesters were being protected before it turned violent, protesters in most parts of the state were not protected by the police. 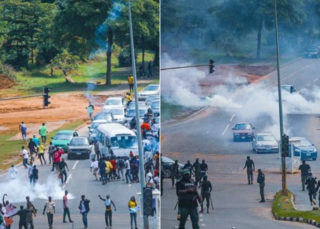 In Abuja, while the protesters were calling for the disbandment of the dreaded police unit, Special Anti-Robbery Squad (SARS), police fired water cannons and teargas at the peaceful protesters.

Also in Oyo state, rather than the protection that the IGP claimed was given to the protesters, Jimoh Isiaq was shot and killed by a stray bullet from police as they tried to disperse protestants in Ogbomosho.

In what has now been tagged a Black Tuesday or Lekki massacre, investigations, video evidence and pictures have shown that peaceful protesters were massacred at the Lekki toll gate in Lagos state on October 20.

Following the killings, injuries perpetrated by men of the Nigerian Police, hoodlums used the opportunity to hijack the ENDSARS protests.

Most especially in Lagos state and Abuja, innocent individuals allegedly sponsored by agents of the government attacked peaceful protester.

At the Lekki toll gate, public and private properties were destroyed by hoodlums including attacks on police stations.

Chat us on WhatsApp
Advertisement
Previous articleENDSARS: Woman narrates how police officers beat her up until she peed on herself
Next articleN’Delta militants warn about fresh attack