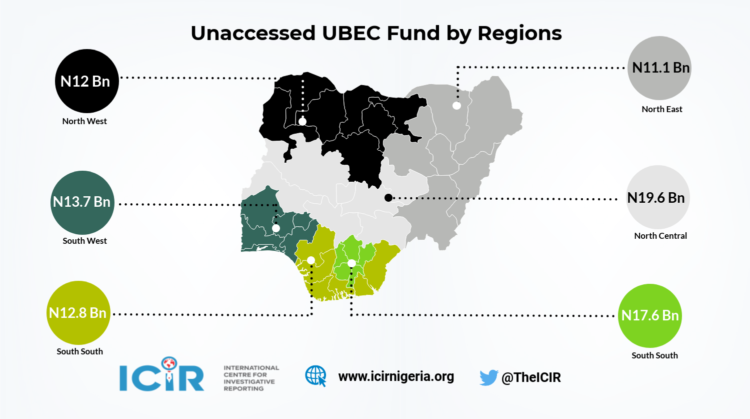 NORTH-CENTRAL ranks top among the regions that are yet to access the Universal Basic Education (UBE) matching grants with approximately N19.6 billion lying untouched at the Central Bank of Nigeria, despite its distressing educational sector.

According to the 2018 UBEC report of  un-accessed matching grant, the region comprising six states –Kogi, Kwara, Plateau, Benue, Nasarawa and Niger, and the Federal Capital Territory (FCT) has a total of N19.58 billion to expend on basic education; but the pool of funds has remained unused over the years.

North-central was followed by South-east with 17.6 billion un-accessed matching grant.

UBEC’s matching grant is a counterpart funding between the federal and state governments earmarked for to eradicate illiteracy, ignorance, and poverty as well as stimulate and accelerate national development, political consciousness, and national integration.

The fund is deployed to improve the quality of basic education in all 36 states. The responsibility of a state government is to provide 50  percent to match the annual disbursement provided by UBEC. With the fund, UBEC seeks an uninterrupted and compulsory nine years of primary and junior secondary school education for all Nigerian children.

The breakdown of the un-accessed fund per state with the region shows that Kwara has the highest un-accessed fund of N5.1 billion, Plateau state N4.2 billion, and Benue State is yet to access N3.3b. Also, Nasarawa and Niger are yet to access N2.7 billion and N2.3 billion respectively. Kogi still has close to N983 million to be obtained, as well as the FCT. 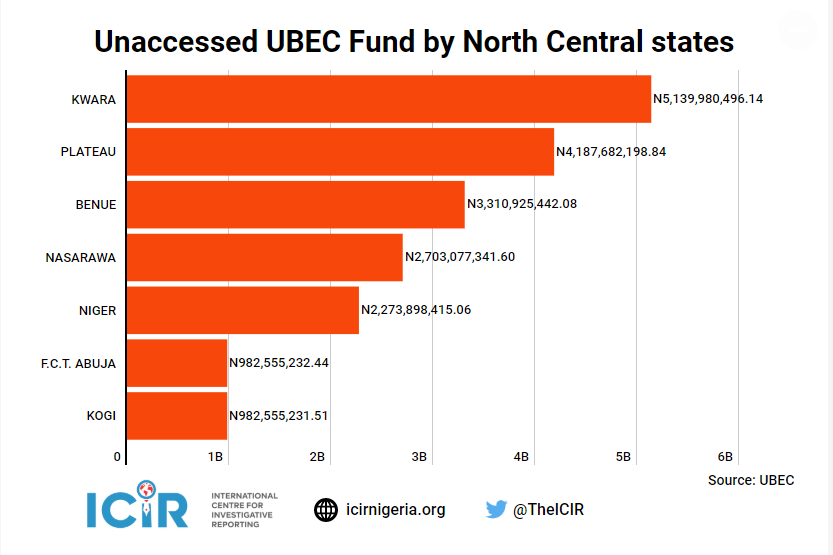 As the money keeps piling at the Central Bank of Nigeria, the educational facilities of the six states and the federal capital have suffered distress. It is hard to ignore the obvious high rate of out-of-school children in the region.

The Northcentral region’s population of out-of-school children is the third highest in the country, based on the Multiple Indicator Cluster Survey (MICS) of 2017.

Out-of-school children, according to UNESCO, are children who are yet to be enrolled in any formal education, excluding pre-primary education.

According to MICS, the Northcentral is home to 23.8 per cent of the number of children not enrolled in basic education. The Southeast, Southsouth, and Southwest regions are better off as they consist of 11.3, 13.3 and 14.6 per cent sequentially. The Northcentral is only ahead of the Northeast and Northwest where the percentage is estimated at 39.8 per cent and 29.9 per cent respectively.

Apart from the number of unenrolled children, the results of the secondary school certificate examination (SSCE) of the North-central states also have been disturbing.

The result ranking of the 2018 West African Examination Council (WAEC) graded none of the Northcentral states among the best performing states that had a minimum of 70 per cent of students who passed the examination. In fact, none of the states made the top 10 in the ranking.

The FCT led the Northcentral by securing the 14th position, while Kogi and Benue follow closely at the 15th and 16th positions respectively. Kwara’s position was 18th. Plateau and Nasarawa’s positions followed as 22nd and 23rd. Niger came last in the region with the 27th position.

The ranking was measured by the performance of the candidates who passed five subjects including English and Mathematics in the examination.

Checking through the period of 2013 to 2018, each state in the region has failed to access the pool of fund at one time or the other. Kwara, since 2013, is yet to access its own share of UBEC fund. Nasarawa and Plateau did not claim the grant of 2015, while Kogi has N2.3 billion unobtained since 2015. Each of the FCT and Kogi State are yet to obtain the 2018 grants of N982.6 million.