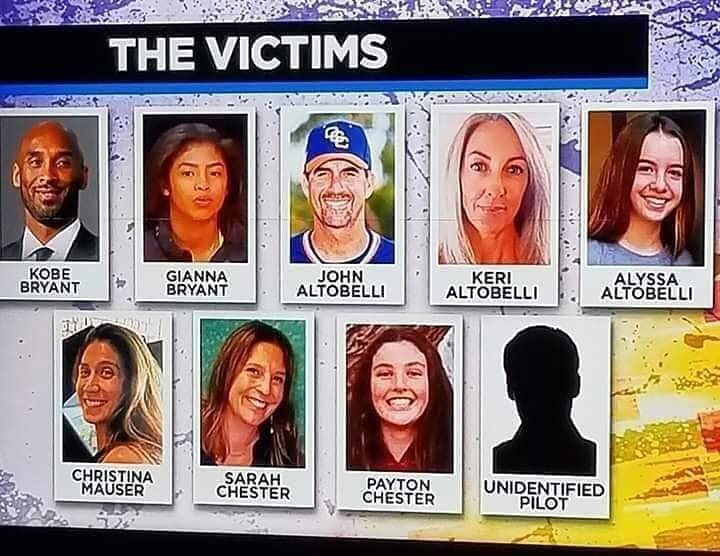 DONALD Trump, the Clintons, Obama, Atiku and other prominent figures have paid tributes to a Kobe Bryant, his daughter Gianna and seven other victims of the helicopter crash that occurred on weekend at Calabasas, California.

In a series of tweet shared on Sunday night, the president of the United States, Donald Trump and his wife Melania, expressed their condolences to the Bryant family over the loss of Kobe and Gianna.
In his eulogy he described Bryant as a loving father and one who has a strong passion for the future.

‘’Kobe Bryant, despite being one of the truly great basketball players of all time, was just getting started in life. He loved his family so much, and had such strong passion for the future. The loss of his beautiful daughter, Gianna, makes this moment even more devastating.
“Melania and I send our warmest condolences to Vanessa and the wonderful Bryant family. May God be with you all,” the president tweeted.

Similarly, former presidents of the United States, Barack Obama and Bill Clinton also sent their sympathies in honour of the NBA star and his daughter respectively.

Obama in his tweet said it was heartbreaking to lose a child as a parent, stating that Kobe was a legend who was just starting his life, he also expressed his sympathies to the families of the other victims

Bill and Hillary Clinton in a statement issued on their foundation’s website about the incident, said they were deeply saddened by the news of Kobe, his daughter and those who died in the crash, and referred to Kobe as one who brought excitement and joy to basketball fans. He was also an advocate to young people and a leader outside the court, they said.

‘’Hillary and I are deeply saddened by the tragic loss of Kobe Bryant, his daughter Gianna, and all those who died in today’s helicopter crash. Kobe brought excitement and joy to basketball fans not just in Los Angeles, but all over the U.S. and around the world. He was also a leader off the court, including in his advocacy for young people, especially the vulnerable and homeless — a passion I saw first-hand when I joined him and Vanessa for the opening of a housing project they and their foundation supported. Kobe Bryant lived a very large life in a very short time. But above all, he loved his family. Our prayers are with Vanessa, Natalia, Bianka, and Capri, and all those who lost loved ones today.’’

Subsequently, former Vice President Atiku Abubakar and former Aviation Minister described Kobe as a legend who redesigned the basketball game and a shining star and one of the greatest basketball players.
‘’Kobe redefined the beautiful game of basketball for all of us. Rest In Peace, legend. Atiku tweeted’’

He entered the NBA directly from high school and won five NBA championships. Bryant was an 18-time All-Star, 15-time member of the All-NBA Team, 12-time member of the All-Defensive Team and the 2008 NBA Most Valuable Player, (MVP), and was widely regarded as one of the greatest basketball players of all time.

He was married to Vanessa Bryant for 19 years and had four children including Gianna 13, who died alongside her father.

As at the time of this report, it has not been ascertained what caused the crash, as investigations are still ongoing, the Los Angeles Police department spokesman says they are yet to determine if it was technical or weather issues.