Rochas Okorocha, Governor of Imo State, is fast making a name for himself as the most controversial State Governor in Nigeria, no thanks to his numerous policies that has been described at best as nepotistic.

On Monday, he swore in Ogechi Ololo, his own biological sister as Commissioner for Happiness and Couples’ Fulfillment. Before her recent appointment, Ololo was the Deputy Chief of Staff to Okorocha, as well as his Special Adviser on Domestic Matters.

But that’s just one out of the many grossly unpopular decisions of Okorocha’s that leaves one wondering what exactly is going on in his thoughts.

Here are some of his more incredulous actions.

Following the demise of Justice P.I Okpara, former President of the Imo State Court of Appeal in May, Okorocha appointed Christiana Anwuka, as Acting President.

Now, Anwuka is mother of Uzo Anwuka, who is married to Okorocha’s second daughter, Uju.

Also, Justice Anwuka is the wife of Anthony Anwuka, who is currently Nigeria’s Minister of State for Education.

Anwukah, who recently drew public ire for travelling to the United States for medical treatment, was also nominated by Okorocha. Before his nomination to the ministerial position, he had served as Secretary to the Imo State Government.

Similarly, Uche Nwosu, another of Okorocha’s sons-in-law, was Imo State Commissioner for Lands and Urban Planning.

Eke-Ukwu Market is a historic market in Owerri, the state capital, but Okorocha demolished the market in August.

It was bad enough that he ordered the demolition of the market, but he did it in spite of a valid court order directing that status quo be maintained, Matters came to a head when security officials sent to disperse the protesting traders shot and killed a 10-year-old boy who was helping his widowed mother pack wares out of their shop.

But Okorocha maintained that there was no court order against the demolition of the Market, adding that he had built two bigger markets to relocate the traders.

“Four years ago I issued a notice that Eke Ukwu would be removed and we started making arrangements for an alternative places for them,” he said during an interview with Channels Television.

“We built over 5,000 shops, while what was in Eke Ukwu was about 3,000 shops; we built an additional 4,000 shops somewhere, total of 9,000 shops to accommodate Eke Ukwu and other street traders.

“On three instances we gave them deadlines, but rather than leaving, people who are not even traders there, but who are some few opposition trouble seekers, now said they were defending the market people and decided to go to court. No market person is in court.” 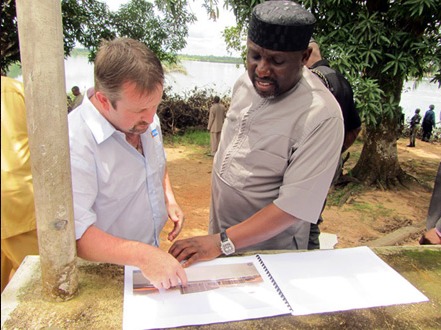 During the same interview, when Okorocha was asked why roads constructed by his administration were already worn out, he said: “Any road in the world can have some patches.”

“Some of these your questions make me laugh,” he continued. “The roads that we have not even finished is already adjudged substandard.

“Your political enemies can never see anything good in what you are doing. My worst enemy can only say he does not like Rochas but he cannot say Rochas is not working.

“You must differentiate between the roads we are constructing and the old roads that have been in existence. If you go to Yar’Adua Road and you see patches, that is not constructed by this government and we are patching them up.” 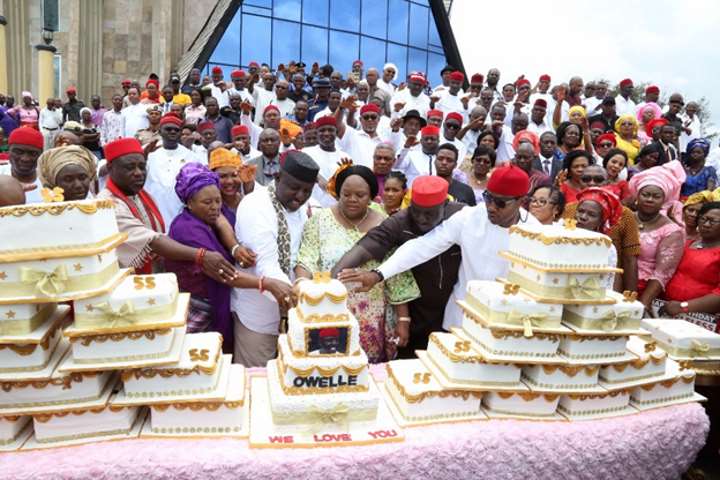 Okorocha turned 55 on September 22. Four days before that, he tweeted about how women groups from the 27 local government areas of Imo State decided to “celebrate” him with 27 birthday cakes.

“It’s not yet my birthday, but the sound of celebration and drum rolls begins, a show of love as women from 27 LGA with 27 cakes visits me today,” he tweeted. 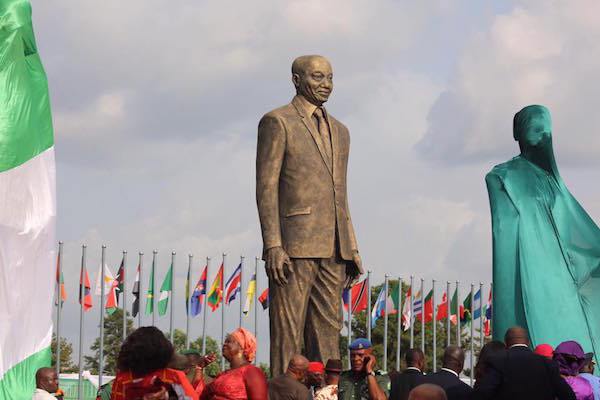 This is arguably Okorocha’s most daring and brazing decision since taking office as Imo State Governor in 2011.

Okorocha invited Jacob Zuma, President of South Africa, to Imo in October, not to attend any special function in Nigeria or the state, but to finalise a partnership between the individual foundations — the Rochas Okorocha Foundation and the Jacob Zuma foundation.

During Zuma’s visit, Okorocha conferred on him the Imo Merit Award, the highest award in the state, and also gave him a chieftaincy title: Ochiagha di oha mma of Igbo land (The people’s warrior).

A street was named after Zuma and a gigantic statue of his was unveiled in Owerri.

All these for a man facing several corruption allegations in his home country, South Africa.

Earlier in 2017, Zuma was made to return money that he had illegally used to upgrade his personal residence.

Also, many Nigerians have lost their lives to xenophobic attacks in South Africa, and Zuma hadn’t done enough to check the ugly trend.

Yet Okorocha told Imo Citizens that Zuma’s statue in Owerri was part of his efforts at attracting development to the state.

Trust Nigerians to always express their opinion on social media! 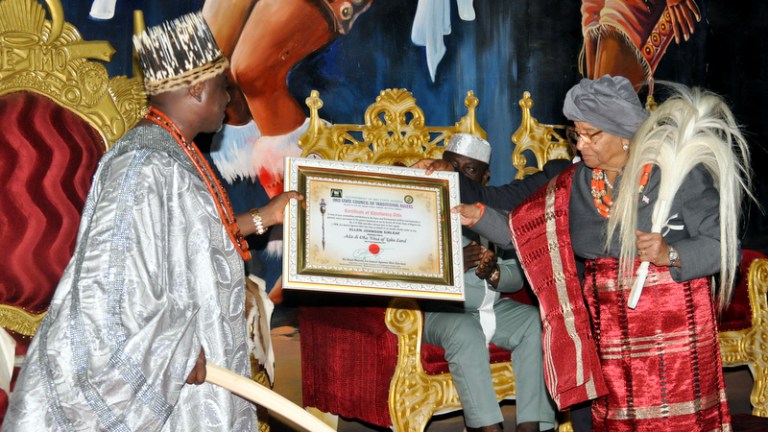 Like Zuma, Johnson-Sirleaf was conferred a chieftaincy title –Ada di oha mma of Imo State -, and her statue was also unveiled by Okorocha.

Perhaps, the gesture was Okorocha’s way of honouring the first democratically elected female President in Africa.

With his recent appointment of his sister as Commissioner of Happiness and Couples’ Fulfillment, one can only wonder what he will do next before eventually leaving office in 2019.