Politics and GovernanceElections
Nurudeen AKEWUSHOLA
May 5, 2022 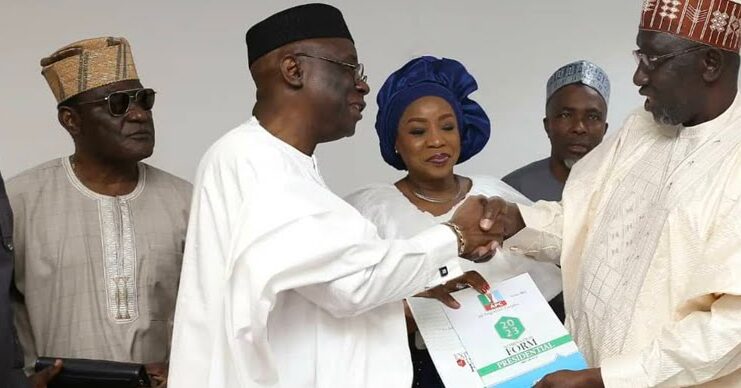 FORMER running mate of president Buhari and Overseer of the Citadel Global Community Church, Nigeria, Tunde Bakare, has picked the N100 million presidential election expression of interest and nomination forms of the All Progressives Congress(APC).

Bakare obtained the forms at the headquarter of the party in Abuja on Thursday.

Bakare also said he would officially declare his presidential ambition on May 9, 2022 at the Shehu Musa Yar’Adua Centre, in Abuja.

Announcing his intention to run for President, Bakare said: “Having been privileged to serve Nigeria in various nation-building capacities, I intend to take a step further in the service of our beloved country and of you, her worthy citizen, by running for the Office of the President of the Federal Republic of Nigeria.

“It is with utmost humility, therefore, that I write to formally inform you – distinguished citizens of our nation, elder statesmen and stateswomen, political leaders, traditional leaders, overseers of religious establishments, members of civil society, policymakers, students, public servants from the national and sub-national levels of government, stakeholders from the private sector, the intelligentsia, opinion moulders, thought leaders from various institutions of knowledge, and every Nigerian, home and abroad – of my intention to contest.

“Propelled by the desire to rebuild Nigeria into a nation that works for every Nigerian, I have, in the past, engaged in the political process as running mate to President Muhammadu Buhari in the 2011 presidential elections under the Congress for Progressive Change, and subsequently, as the founding member of the All Progressives Congress who moved the motion for the merger that produced the APC.

“I have also served as a leader in the civic space as the Convener of Save Nigeria Group, a coalition of civil society groups that facilitated the rightful recognition of President Goodluck Ebele Jonathan, first as Acting President, and then as substantive President, through a grassroots people movement and high-level advocacy.

“In 2014, it was my privilege to be selected as a South-West Delegate to the National Conference, where I proposed “The Nigerian Charter for National Reconciliation and Integration” that was unanimously adopted and incorporated into the final report.

“Furthermore, I have been actively involved in awakening collective citizen ownership through the pulpit as the founding Serving Overseer of the Citadel Global Community Church, formerly known as The Latter Rain Assembly.

“I have, in addition, contributed to engendering social, political and economic shifts in Nigeria through propositional platforms, including through such initiatives as the New Nigeria Dialogues, the inaugural event of a think-tank I founded in 2009. I have also provided pro bono advisory services to government institutions through key policy inputs, while fostering coalition-building across divides, in addition to building thriving businesses in diverse sectors.

“I have remained committed to harnessing my local and international networks, platforms and resources towards the emergence of the New Nigeria. As I offer myself to serve you and to work with you towards the peace, progress and prosperity of Nigeria, as well as the realisation of the enormous possibilities of a great nation in this decade, it would be a great privilege to welcome you as my special guest on the occasion of the formal declaration of intent.”