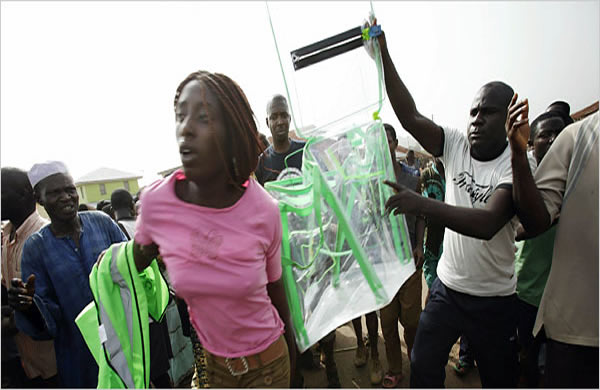 The local government election held on Saturday across Delta State turned violent with no fewer than 10 persons sustaining serious machete cuts as dispute broke out between supporters of the ruling Peoples Democratic Party, PDP, and the opposition All Progressive Congress, APC.

Those injured were said to be members of the APC, allegedly attacked by thugs suspected to be loyal to the PDP, at the divisional police headquarters in Warri.

The thugs who freely used dangerous weapons, including machetes, bottles and sticks attacked their opponents just as the policemen at the gate of the police station turned a blind eye.

Not less than 10 persons, including women and an unidentified councillorship candidate, sustained deep machete cuts and were later ‎rushed to an undisclosed hospital for medical attention.

It was gathered that a dispute broke out between the two groups when some APC supporters alleged that the electoral materials supplied to the local government and kept in custody of the divisional police headquarters, especially the sensitive materials, were tampered with at about 10.00pm on Friday and insisted that the materials must be inspected by agents of all the political parties before distribution.

This, however, did not go down well with supporters of the PDP who insisted that whatever the shortfall would be addressed at the ward level and later forcefully opened the gates of the police station, resulting in a free for all between supporters of both parties.

It took the intervention of men of the Nigeria Army who were called for back-up to restore normalcy to the area.

Collins Aburime and Petrus Bamigho who witnessed the event accused the military of brutality for ordering them, as well as 18 others at the scene of the clash, to lie roll in the dirty erosion water, an action they termed as inhumane and undemocratic.

The duo who also had their vehicles vandalized explained that they were sitting peacefully when the military officers ordered all of them to leave the vicinity of the police station and subsequently forced them to roll in the stagnated erosion water.

The electoral materials were finally taken out of the police station to unknown destination at about 1:20 pm, by officials of the Delta State Independent Electoral Commission, DSIEC, escorted by anti-crime police van.

As at 4.00 pm, voting had not started in Koko as materials were yet to arrive, A similar situation was reported in Ozoro, Ughelli, Warri Mosogar and Sapele where voting materials were said not to have been seen at about 2 pm.

There were also report of pockets of violence in most major towns in Delta South and Central, including Warri, Ughelli and Abraka.

The situation was however different in Delta North where voting reportedly went peaceful and undisturbed.

A chieftain of the PDP, Mike Diden, said the APC supporters were out to frustrate the conduct of the election in the locality noting that the election went on peacefully and commended security operatives for living up to expectation.

Nigeria election marred by violence in some states

11 Die In Youths/Shiites Clashes In The North