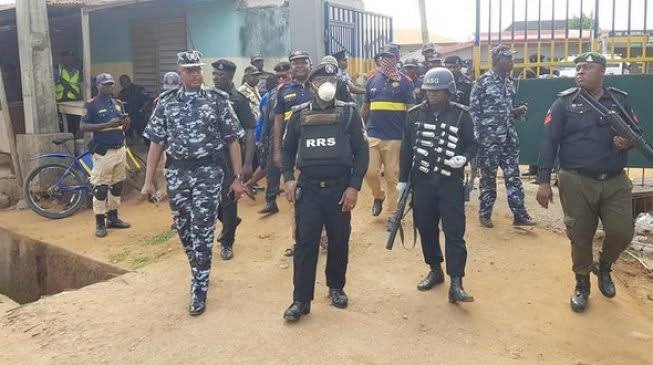 Lagos, Ogun residents are no doubt celebrating this Easter season with caution and trepidation. At any time of the day since  the lock down became effective, fear has continued to rule the hearts of many people — it is not that of the unknown — It is a veritable fear of armed robbers, hoodlums and miscreants who strike and operate in raw dare-devilry.

While the wave of armed robbery appears to be sweeping through these two states — Ogun and Lagos respectively — in an alarming manner and with terrific frequency. Many news outlets in screaming headlines, report daily incidences of these nefarious activities perpetrated by armed robbers. Similarly, social media has been abuzz with series of distressing updates about the threats of these men. Sadly, lives and property are at the mercy of these hoodlums.

For days now, It has become sort of a dark dawn for residents of Ifo, Sango, Agbado, neighbouring communities in Ogun State, and even extensively down to some major spots in Lagos.

Many people have lamented about the rising criminal activities occasioned by the lockdown in the state. When these armed men came calling, the men of the underworld came prepared; over hundred of them.

It is quite surprising that metres away from these crime scenes are countless of road blocks and police surveillances, yet these robbers are having a smooth operation.

One would begin to wonder about SARS’ critical role in curbing armed robbery and kidnapping as well as maintenance of law and order.

It raises the question on whether the police have lived up to expectation in discharging their primary responsibility of protecting lives and property.

A situation where innocent residents are attacked by “armed robbers”, and the police fail to stop such nefarious acts, leaves one terrified.

Many residents who indeed are very worried about the recent upsurge in cases of armed robberies, especially those who have been victims of  these men, have taken up the position of ‘Amotekun’, in keeping their territory safe.

Even those who are operating under the directives of provision of essential services, have complained and lamented bitterly.

Lagos for example is gradually returning to the old bad jungle days, maybe due to the lockdown. These miscreants who are always living under the bridges or some dark sports, break windscreen to get access to their victims. They waylay passersby to steal their belongings in broad day light.

While it is understandable that the lockdown birthed this sort of insecurity, it is therefore unacceptable that our security agencies have allowed these cases to escalate beyond what it can handle, many residents have used this an opportunity to take up arms and other dangerous items as a means of protection.

It is quite saddening that some of our leaders and politicians have continued to be insensitive to the needs of the society that they are supposed to serve.

The social and cultural order in Nigeria is constantly sending negative ‘stimuli’ that encourage armed robbery as one of the many ‘anomalie’ in the society.

With the current spate of insecurity arising from these criminal elements, everything must be done by “everyone” to ensure that armed robbery attacks and other criminal activities are reduced to the barest minimum.

The security agencies must devise a strategy to ensure that our streets are safe, as they reflect the state of safety or the absence of it in the country.

If these armed robbers and hoodlums are so elusive, like a will-o-the wisp, security agents must devise some equally strategic plans of tackling the menace of these sepulchral objects before they overrun our states.

Alao Abiodun writes from Lagos, He can be reached via [email protected]