THE official website of the Nigerian Embassy in Beijing, China was last updated around 2013 despite an ongoing threat from novel coronavirus, that broke out earlier this month in Wuhan, China, and has since killed over 200 people.

Cases of the virus attack have been confirmed in over 20 other countries, leading the World Health Organisation to declare it a global health emergency on Thursday.

Many countries, including the US, UK, Canada, France, and India, have released travel advisories warning their citizens against travelling to China or even banned such flights outright. Others have started evacuating their nationals from affected regions.

But, Nigeria’s plans for her citizens residing in the East Asian country are still murky—though they numbered over 10,000 as of 2014. The Foreign Affairs Ministry said, on Wednesday, that there no plans to evacuate Nigerians “for now”.

That is not all. It has been observed that the country’s embassy in China appears unprepared to properly handle the situation and safeguard Nigerians. Its website contains no announcements about the virus outbreak and there are, in fact, indications it was last updated as far back as in 2013.

The “latest events” page contains only one update about a musical show organised to commemorate the 52nd anniversary of Nigeria’s independence. It was scheduled to take place on Friday, October 12, 2012. The public notice page has two entries: one from June 2007 and the latest from October 2013 about visa applications.

The website also still parades Goodluck Jonathan as the president of Nigeria, even though he handed over to Muhammadu Buhari five years ago (archived here). Jonathan was president between 2010 and 2015. Likewise, it states that Aminu Bashir Wali is Nigeria’s ambassador to China from 2009 to date. Wali has ceased being the ambassador to China and Baba Ahmad Jidda was appointed into the position in 2017.

The ICIR observed that in September 2018, a new domain was registered for the China-based embassy, nigerianembbeijing.gov.ng, by Galaxy Backbone, the federal government’s information technology and shared services provider. But the website was not developed till the hosting expired a year later. 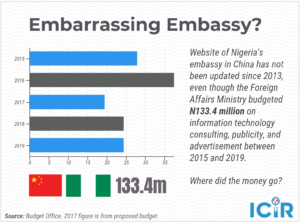 It was also noticed that the website of Nigeria’s consulate in Hong Kong still features Bala Muhammed as the Minister of the Federal Capital Territory though he left office in 2015, and lists governors who were elected as far back as 2011.

For the consulate in China, the “latest news” update on the website is from May 2016.

All three websites have outdated information and poor interfaces despite budgeting for the purpose. In 2019, for instance, the Foreign Affairs ministry budgeted N19 million for publicity and advertisements, as well as N5.4 million for information technology consulting.