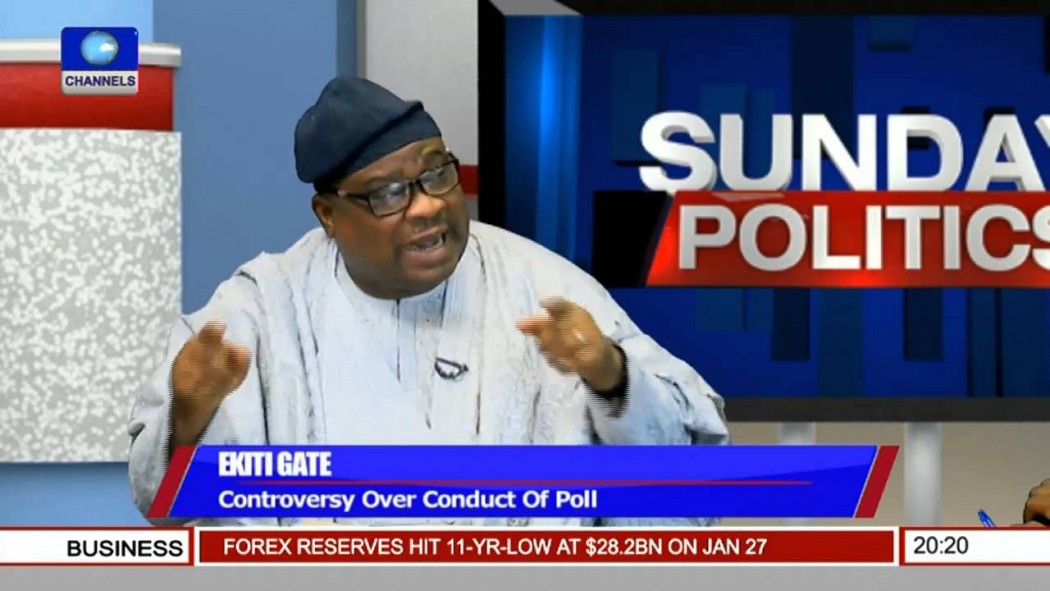 Senator Ibrahim Mantu, former Deputy Senate President, is no ordinary politician. He is “born-again”. He laid claim to this in September and said he now speaks only the truth. He also urged leaders of his party to elect Tunde Adeniran as the National Chairman because he “fasted for 30 days and night” asking God to show him who would lead the party, and God showed him Adeniran!

He has also been an advent critic of impunity in the People’s Democratic Party (PDP), citing it as the cause of the party’s downfall in 2015. “When PDP is mentioned today, what comes to mind is how the party introduced impunity, fraud and corruption into governance,” he said in  an interview with Vanguard in 2016.

In another interview with The Sun, he again emphasised that the party lost the 2015 presidential election because it allowed impunity to grow within its ranks. It is thus baffling that Mantu is also lending a hand to the reign of impunity by not handing himself over to the police following a claim that he helped rig elections.

On Friday, while being interviewed on Channels TV’s Hard Copy, Mantu explicitly confessed to rigging elections. Maupe Ogun, the presenter, was unsure she heard him correctly, so she sought clarification, to which he replied: “Let me tell you one thing, yes I did. I am now confessing the truth.

“What do I mean? I don’t have to go and change election… but you know, when you provide money; you give money to INEC boys to help you, if they see any chance, that they should favour you. You [also] provide money to the security. All our elections in the past. And I tell you, it’s not necessarily when I’m contesting election but when my party sponsors a candidate.”

As Femi Falana, lawyer and activist, has noted, it is unlikely the government will take any legal actions in reaction to this confession. He said he is convinced the Buhari will not follow-up this revelation “because we operate in an atmosphere of impunity. The country is run on the basis of official impunity.”

Falana’s greatest source of conviction must be the nonchalant reaction of government and law enforcement agencies to similar revelations in the past.

Here are two of these cases:

Still fresh in the minds of many is the detailed revelation from Temitope Aluko, former Secretary of Ekiti PDP. The platform was also Channels, but ‘Politics Today’ this time. Aluko didn’t mince words in discussing how the 2014 election was rigged in favour of Ayodele Fayose, the PDP governorship candidate, the breaking point of their relationship being Fayose’s failure to appoint him as his Chief of Staff “as agreed”.

“So, you are saying that the election was rigged?” asked Seun Okinbaloye, the presenter.

“The election in Ekiti?”

“Yes, it was rigged systemically.”

In all, his allegations implicated former President Goodluck Jonathan; Adamu Mu’azu, former Chairman of the PDP National Working Committee; Musiliu Obanikoro, former Minister for State for Defence; Jelili Adesiyan, Minister of Police Affairs; and Iyiola Omisore, former Deputy Governor of Osun State; among others. He took time to reveal the actors, their conspiracies, and how the military was used to engineer the results.

Both Adesiyan and Omisore admitted the authenticity of a released tape containing record of a meeting with a Nigerian Army General, on the subject of electoral malpractice.

Two years after, however, none of the persons mentioned has been questioned on these allegations ― except that a court warrant was secured by the Ekiti State Government to arrest Aluko for perjury. As a matter of fact, Aluko later released a press statement apologising to Fayose for all he had done.

“By the grace of God, we have resolved all issues and I have apologized to him for whatever wrong steps that I took in the past,” he said. “The Governor took me back without consideration for the past and for this, I have vowed to remain committed and loyal to him and all that he represents.”
- Advertisement -

Three years earlier, Godswill Akpabio, then Governor of Akwa Ibom state, made a similar revelation on live television during the Federal Government’s ‘Good Governance Tour’ in Uyo. In trying to convince the audience of his generosity, Akpabio admitted to falsifying a senatorial election result and personally replacing the winner with his preferred candidate, Aloysius Etok.

“The people of Ikono and Ini (Local Government Areas) from 1960 have never produced a Senator,” he stated.

“I used my own hand to strike out the name of the person who had won before, and I said it was important for me to give that region a Senator in 2007, and I produced Senator Aloysius Etok for you; that’s where he comes from.”

Labaran Maku, former Information Minister, who was also at the event, later dismissed the weight of the Governor’s statement, telling Channels’ Sunrise Daily: “The Governor of Akwa Ibom is a very bold man. He goes out for what he believes in.”

Akpabio is today the Senate Minority Leader and, as predecessor and “godfather” of the current Governor, he still calls the shots in Akwa Ibom politics.

Chat us on WhatsApp
Advertisement
Previous articleReno Omokri, Jonathan’s media aide, releases ‘APC looters list’
Next articleALERT: Stolen iPhones in the UK are ending up in Nigeria as ‘UK-used’