Five years on, Buhari government yet to deliver on anti-corruption fight

DESPITE the pledge by President Muhammadu Buhari and his party,  APC to fight corruption in Nigeria among other campaign promises, the public record shows that this administration has not yet made a dent on corruption, one of the biggest problems stagnating Nigerian progress.

The ICIR examined the global corruption data published by Transparency International since 2003 and found that Nigeria has not recorded significant progress in the anti-corruption fight.

During his campaign ahead of 2015 election,  Buhari promised that “anyone who steals Nigeria’s money will end up in Kirikiri Maximum Prisons. We are going to make sure that Nigeria’s wealth belongs only to Nigerians”.

The president’s promise draws from the party manifesto  stating that it will “prevent abuse of executive, legislative and public offices through greater accountability, transparency and strict enforcement of anti-corruption laws whilst strengthening the EFCC and ICPC.”

Five years down the line, it is business as usual. Public officials and politicians still continue to misappropriate public funds with little or no consequence.

Many cases of corruption that had taken place under this administration are well documented in the media. Civil society and international organizations also have reported about unbridled corruption during the Buhari administration. Hence, the little progress made in the fight against corruption as documented by Transparency International.

According to Transparency International, Corruption can take many forms such as public servants demanding or taking money or favours in exchange for services, politicians misusing public money or granting public jobs or contracts to their sponsors, friends and families, and corporations bribing officials to get lucrative deals.

In 20o7 when former President Olusegun Obasanjo left office, the Anti-Corruption Index, ACI for Nigeria was rated at 22 out of 100.  The Anti Corruption Index gives numbers from 0 to 100, where 100 is the best index. When his successor, late President Umaru Musa Yar’adua died in office in 2010, the anti-corruption index of 24, and when former President Goodluck Jonathan left office in 2015, the index for Nigeria was 26. 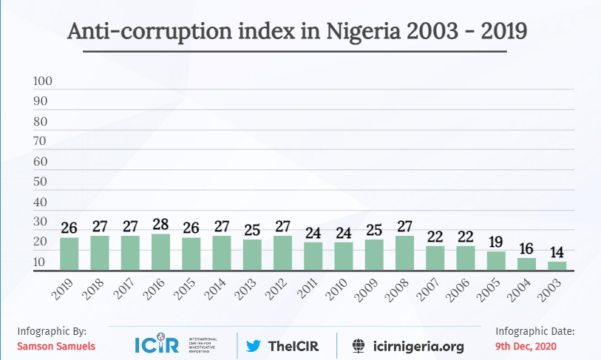 The ICIR sent a message to the spokespersons of the president, Femi Adesina and Garba Shehu, asking for comment on the performance of their principal, none of them responded.

Similarly, in a statement issued by the president of the National Association of Seadogs (Pyrates Confraternity) Abuja Chapter, Victor Ofili, the group condemns corruption in its entirety.

“As an advocacy organization whose ideals are grounded on the promotion of a just society, we strongly condemn corruption in its entirety. This global scourge has its tentacles spread across all the countries of the world in varying degrees and has consistently undermined growth and development particularly in Nigeria and other developing countries,” he said.

Secretary-General of the United Nations, António Guterres  has noted in a tweet that “Recovery from pandemic must include measures to prevent and combat corruption and bribery.”

Here is a list of reports by The ICIR showing corrupt practices in public offices: