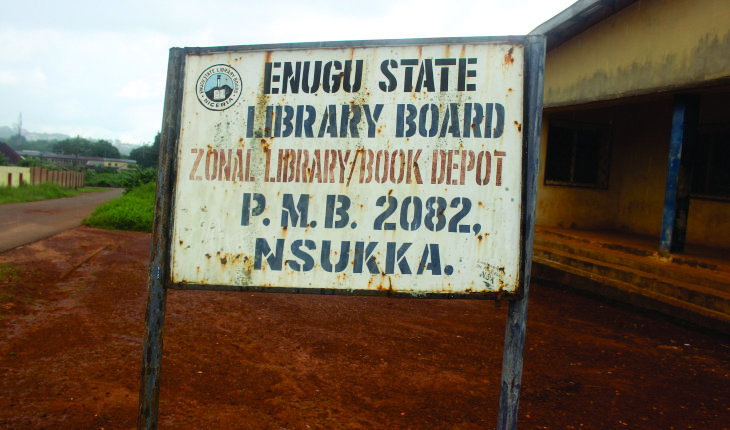 BARELY one month to the publication of the extensive negligence and rut in Enugu State libraries, the state government has commenced massive renovations to be done one after the other.

On December 14 and 21, 2018 respectively, a two-part investigative report titled “INVESTIGATION…Enugu public libraries in ruins despite budgetary allocations” were published.

The snoopy fact-finding was informed by the need to trail the whereabouts of the allotted sum of N134,903,152 by the Enugu State Library Board between the year 2016 and 2018. The funds were actually intended for the upgrading of the standards as well as for up-to-date stocking of these libraries.

Sadly, as findings revealed, the sickish conditions of the libraries was a perfect picture of betrayal of filial trust. The situation met during the reporter’s visit was at variance with reports that each library had individually received various monetary allocations of N43,033,152 in 2016, N54,370,000 in 2017 and N37,500,000 in 2018, within a three-year period.

For the most part, the libraries remained decrepit with leaky roofs and empty shelves. Their worn-out structures and a shortage of personnel portray the status of projects and people starved of funds.

However, upon a recent follow-up visit to the Enugu Central Library by this reporter, rehabilitation works were seen being done on the library by workers from the State Ministry of Works. A development deemed an apparent positive impact of the investigative report.

The curious reporter then engaged the Library Board Director, Jude Offor to offer comments on the situation. He explained that the workers seen were officials from the State Works Ministry. He said they had visited and informed him and staff that renovation works would soon commence in the library starting with the Central Library: and later to proceed to the other four.

“When they arrived and made repeated promises to begin renovating very soon, I took it with a pinch of salt. It’s not new. We’ve heard all that before, so I had thought. But, I was surprised three days after when they came again and started work. And, I’m still amazed because we never expected it. Remember I told you that this a building that was constructed in 1958. And if you look around, you will see a painting of the buildings and fixing of damaged windows. Very soon, they will remove the wooden floor and do the tiling before landscaping the whole environment.

“I am very happy with the developments. I have also been receiving lots of calls from people who said they are seeing the renovation works. Some even said that the library is looking new and its surroundings, glowing. I am very excited that this is happening during my tenure. My predecessors were not that lucky to witness this renovation going on. You know they did their best for the library to be renovated, but nothing happened,” apparently elated Offor said.

Asked if he was informed about the specifics of the renovation and the timeline for completion, Offor said: “When they came here, they showed me the bill of quantities for the libraries’ renovation project at the sum of N34 million. The bill of quantities contains everything they want to do and how they want to go about it. But the truth is that, I am not interested in how they use the money. All I know is that work is ongoing. And that is what matters most to me. I don’t know when they will finish because there are many works to be done on all the libraries,” he stressed.

The State Commissioner for Works and Infrastructure, Engr Greg Eze, said the State Executive Council (SEC), last December, gave approval for the immediate renovation of the five public libraries in the state. He added that this was done in order to encourage the reading culture of the residents and place education on its path of glory. He said it is also in line with their resolve to meet up with the urban renewal projects of the state government.

Eze said: “This is the first time that renovation works will be done at the library in over 40 years. You know it had turned an eyesore whenever people enter the state. That is why as a government, we resolve to ensure a total restoration and renewal of the five libraries. Interestingly, most of the SEC members testified that they studied at the Central Library at some point during their school days. So, we owe it to give the libraries a deserving facelift.”

The Works Commissioner disclosed that the contract, which was bided for, and awarded to Bonez Construction Limited is under the supervision of his ministry. And it will be completed in the shortest possible time-frame.

“You can see the construction engineers are very serious with the works. Every top government official from the governor also wants the urgent restoration and renewal of the state libraries to be uplifted to credible standards,” Eze said.

Speaking on the expected period of completion, the Commissioner said: “I believe within two months, every aspect of the renovation across the libraries will be completed. I must confess there are lots of works to be done on them all. Very soon, you will see all the old roofs removed and replaced it with long-range roofing sheets that had already been ordered for.”