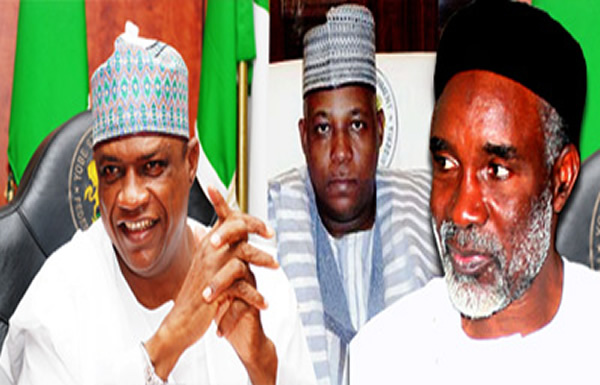 The governor of Yobe State, Ibrahim Gaidam, and his counterpart in Adamawa, Murtala Nyako, have opposed plans by President Goodluck Jonathan to extend by another six months the state of emergency imposed on three Northeast states.

President Jonathan had written to the National Assembly on Tuesday, asking for yet another extension of emergency rule in Borno, Yobe and Adamawa states as the current emergency rule expires in the next few days.

Reacting to the planned extension in a statement by his special adviser on press affairs and Information, Bego Abdullahi, governor Gaidam said extending the duration of the emergency rule is not the solution to the security challenges in the region, reasoning that there has been no improvement over the last 12 months.

The governor noted that other states like Taraba, Plateau, Nasarawa, Benue and even the Federal Capital Territory, are faced with security challenges and yet the military have continued to operate in these states without the imposition of a state of emergency.

“The Yobe State Government, under the leadership of His Excellency Governor Ibrahim Gaidam, takes very strong exception to this move by the President. We believe that extending emergency rule is not the answer to the prevailing security challenges in the three affected states in view of the apparent failure of the same measure over the last 12 months,” the statement said.

It went on to add, “It is therefore our considered opinion that a new approach is needed by the federal government to defeat Boko Haram, restore peace and stability, and rebuild the livelihoods that have been lost. This approach should look at the prevailing challenges in the three affected states as a security challenge rather than a political one and should build on the suggestions already made by the governments and people of these states.”

Gaidam suggests that the military and security forces on the ground be fully and properly kitted with superior weaponry and advanced communications equipment, as well as more technology-driven intelligence gathering and surveillance procedures to be able to detect and prevent attacks.

He said while the military and other security forces can remain on the ground in the affected states and do their work until Boko Haram is defeated, the states should be allowed to return to democratic rule.

Also reacting to the planned extension of emergency rule, governor Nyako described it as ill-advised and a wrong step in quelling rising insurgency in the region.

Speaking through his director of press and public affairs, Ahmed Sajoh, the governor said there is no need for the imposition of emergency rule in the state as it had not reduced the activities of insurgents.

The governor pointed out that there had been even more attacks in the state since the declaration of emergency rule by President Jonathan last year.

Don’t mix bias and sympathy – Adesina tells CAN as…