The reporter disclosed that the threat was contained in a letter sent to his office by someone from Makkah Eye Clinic.

The Makkah Eye report detailed how the clinic consistently maltreated patients seeking medical help, systematically disengaged indigenous staff on frivolous allegations, just as it continued to short-change the Bauchi State government on tax revenues for six years – allegations the management of the hospital conceded in an interview.

The two-month investigation by the reporter also documented several harrowing experiences of patients who consulted the facility and the high cost of services and medications offered by the hospital when compared to other health facilities in the state. For instance, Musa Haruna, a glaucoma patient, recounted how one Zulfikar Ahmed Abbasi, a Pakistani expatriate consultant ophthalmologist, rained insults on him for his inability to keep his scheduled appointment with the hospital.

The foundation, after the publication of the report, dragged WikkiTimes, its publisher and a reporter to court. 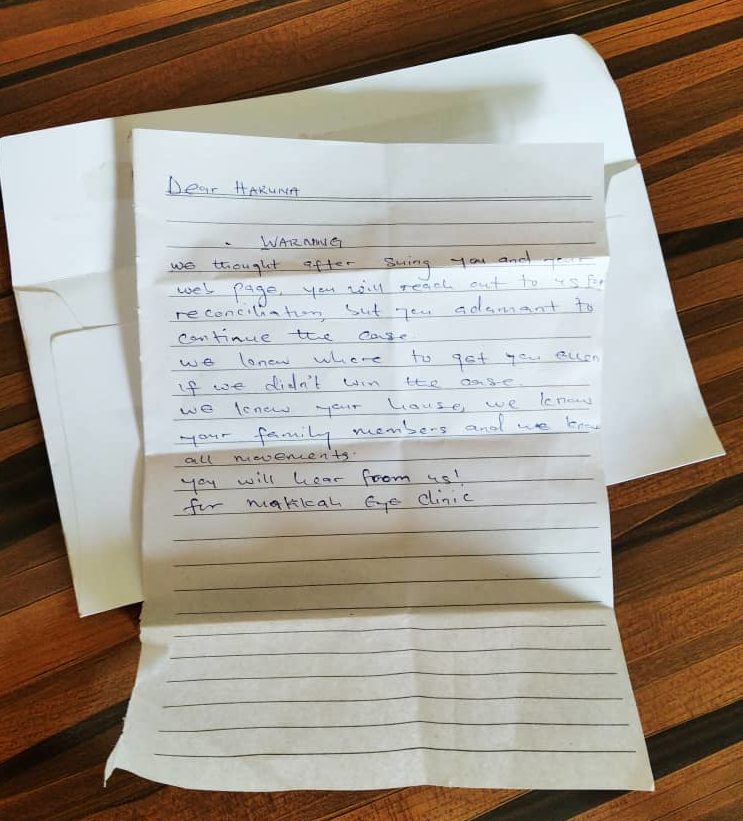 According to Haruna, “I went to my office this morning to search for an HDMI cable for our ongoing training at the Secretariat of the Nigeria Union of Journalists here in Bauchi.

“As soon as I opened the office, I saw an envelope on the floor. It looked as if someone pushed the letter from the doorstep.

“After opening the office, I saw an envelope on the floor by the door side. I read it and found that the content contained a threat to me and my family.”

The letter read in part, “We thought after suing you and your web page, you will reach out to us for reconciliation, but you adamant to continue the case.

“We know where to get you, even if we didn’t win the case. We know your house we know your family members and we know all movements,” the threat letter read in part.

Prior to receiving the threat letter, the journalist had said insiders at the hospital told him some officials of the hospital had issued verbal threats to the whistleblower who first gave WikkiTimes the tip-off about the dealings of the hospital.