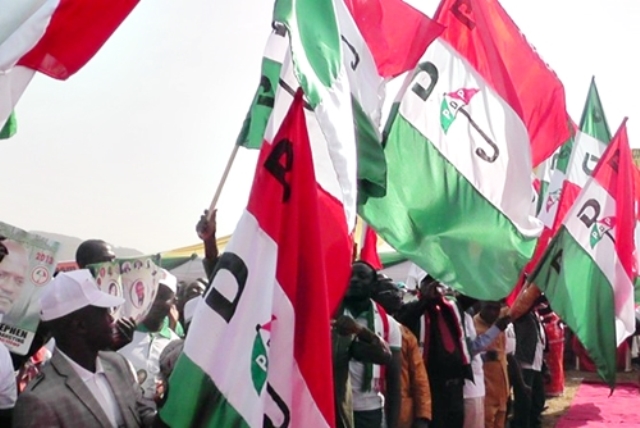 THE People’s Democratic Party (PDP) has urged Nigerians to hold President Muhammadu Buhari and the All Progressives Congress (APC) responsible for the clampdown on protesters who staged protests to mark Nigeria’s Democracy Day on June 12.

Tear gas canisters were fired at some Nigerians who converged in different parts of the country to protest against misrule by the Buhari-led government.

The PDP, in a statement issued on Saturday by the National Publicity Secretary Kola Ologbondiyan, described the attacks as sacrilegious.

The party also said that Buhari displayed his disdain for free speech and other democratic tenets when he addressed Nigerians on Saturday morning.

It also knocked the president for failing to caution the security agencies against clamping down on protesters.

“It is awkward that the APC and President Buhari, who were allowed their freedom when they protested in 2014, would turn around to subject Nigerians to actions of inhumanity including the use of firearms against the people, as being witnessed today,” PDP said in the statement.

The party disclosed that it was cataloguing all the infringements which the APC and President Buhari “are rudely imposing on people in the country” for the attention of the international community.

The ICIR had reported earlier on Saturday how security agents attacked protesters at Ojota in Lagos State.

Several media reports indicated that the government mobilised police and other security agents to clamp down on protesters in various parts of Nigeria.

The ICIR also, on Saturday, reported how a pro-Buhari protester said people in his group members were paid between N1,000 and N2,000 each to join demonstrations against the June 12 protest.

The pro-Buhari protester, Abdul Yusuf, made the revelation in a video sent to Premium Time.

Meanwhile, Nigeria faces unprecedented insecurity in which four of its six regions are confronted with secessionists, bandits, kidnappers and terrorists.

While the North-East and North-West battle terrorism, banditry and kidnapping, respectively, the South-East and South-West are threatened by secessionists.

Buhari had directed the security agents to go after trouble makers in the country and bring them to justice.

Also, in October 2020, the president vowed that he would never allow protests that would culminate into arson, destruction of property, looting and wanton killings that characterised the #EndSARS protests across the nation.

The immediate past Inspector-General of Police Muhammed Adamu also gave a similar threat.

Nigerians staged the #EndSARS protests to compel the Federal Government to disband the Special Anti-Robbery Squad (SARS) – a notorious arm of the nation’s police.

Apart from pro-secession protests in the South-West led by Sunday Adeyemo, popularly known as Sunday Igboho, no major protests have taken place in the country since the #EndSARS conundrum.