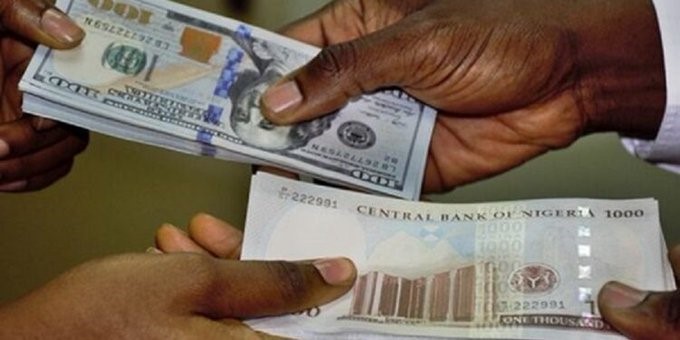 THE Nigerian currency, the Naira, has been appreciating since last week against the American dollar at the parallel market. Market analysts say there is no cause for cheer, as they do not see the advantage as sustainable.

The naira depreciated against the dollar on Monday, November 14, trading at N760 to one dollar after gaining 26.24 per cent last week at the parallel market.

The local currency lost 8.24 per cent of its value after trading, as the dollar was quoted at an average of N768.33/$, as against N705/$ quoted last Friday at the black market.

Traders said the naira depreciation once again was as a result of dollar shortage amid rising demand. In Lagos, the dollar traded at between N750 and N770 per dollar, compared to between N700 and N710 traded on Friday at the black market.

Economic watchers said that the naira current appreciation against the American dollar, trading under N800/$, was not driven by fundamentals of oil market boom, foreign remittances and Nigeria’s capital importation.

They simply saw the naira as reacting to market sentiments of improperly regulated foreign exchange market and Nigerian government’s announcement on naira redesign.

“What ever we are seeing now is a fluke and not reliable, with regard to strengthening of the naira. The major fundamental drivers of our foreign earnings are oil sale proceeds, capital importation and foreign remittances. Our subsidy payments, oil theft, and weak policies on capital importation denied us gains from this,” a research analyst and chief investment officer with Afrivest, Richard Omotunde, told The ICIR.

The naira appreciation, Omotunde stressed, should not be celebrated yet, noting that they were not driven by known economic fundamentals.

The federal government had on Wednesday, October 26 disclosed its plan to redesign the naira, citing concerns of “illicit” funds in circulation, which it said bandits and kidnappers had been exploiting in perpetrating their crimes.

The apex bank will be introducing the redesigned notes into the financial system on December 15, 2022, and had given January 31, 2023 as the expiry date for legal tender of the notes being rested.

Bureau de change operators (BDCs) confirmed to The ICIR that the announcement had ignited more volatility into Nigeria’s currency market, while impacting on the naira.

The chairman of the Association of Bureau de Change Operators in Nigeria (ABCON), Aminu Gwadabe, told The ICIR that despite the appreciation of the naira, most of the licensed BDC operators were losing their capital on the back of exchange rate volatility.

Gwadabe, however, admitted that gradual dollar scarcity was helping the naira to appreciate in strength, but quickly advised Nigerian economic managers to create a “diaspora export window.”

This, he said, would help in providing window access for those who remit hard currencies from here, and businesses who may not be able to access the official window.

“Having an exchange rate with 100 per cent differentials between the official rate and the parallel market rate is unhealthy for investment into the economy. This development is disrupting the market,” he said.

He explained that the root cause of the problem was lack of availability of the dollar.

Gwadabe further noted that lack of confidence in the stability of the foreign exchange market had forced most Nigerians to hedge their funds in other stronger currencies.

“There is need for the government to allow independent funds through liberalising export proceeds and diaspora remittance instead of enforcing restrictions,” he stated.

He noted that the initiative, when implemented, would allow inflows and improve the supply side of the foreign exchange.

Experts’ suggestion on how to strengthen the naira

Financial experts argue that redesigning naira notes is not the right way to tackle monetary and fiscal policy. The redesign announcement, they posit, has given speculators and manipulators an all field, given the inflationary pressure on the economy.

Analysts insist the fundamentals must be addressed for Nigeria to make progress.

“The government must make its policies on ease of doing business impact on capital importation. Imagine investors struggling to repatriate their funds, as we saw with a particular airline in Nigeria. This is not good for the economy,” an economist, Kelvin Emmanuel, said.

Emmanuel noted that the uncertainty surrounding the exchange rate market, as well as high interest had been negatively affecting investment into Nigeria’s economy.

Agreeing with some experts who had maintained that now was the wrong time to redesign naira notes, the economist said, “The EFCC and other security outfits, not the CBN, are expected to fight the currency hoarders. The CBN can then use the open market operations to mop up excess liquidity in the system, not currency redesign.”

The government, he added, has only created opportunities for manipulators of the market, because of uncertainty.

“Speculators get dollars at official rate and sell at the parallel market. This creates an influx of cash into the economy that is not tied to service or assets. All these push up inflation and worsen the economy,” he said.

Omotunde remarked that the government must continue to fix the problem by taking the right steps.

“Exchange rate is tied to inflation in an import-dependent nation like Nigeria. If we allow market principles to operate, there will be no need for speculation. What we have done is that we have restricted the market, and the players in that market are looking at an alternative market,” he said.

He stressed that the government must do away with subsidy, and also allow a service reflective market.

“Let the interest rate be more market attractive to woo investors into the Nigerian market. Let’s not strangulate businesses; we should ensure that both the fiscal and monetary authorities do the right thing,” he said.

There are lots of violation of the Fiscal Responsibility Act with lending of over N20 trillion to the economy. These are some of the factors pushing inflation up, Omotunde noted.

The World Bank has persistently advised Nigeria to make a decisive move towards exchange rate unification and stabilisation.

The president, World Bank Group, David Malpass, had made this known during a meeting with Vice-President Yemi Osinbajo on Nigeria’s energy transition plan.

While the investors and exporters (I&E) window is adopted at the official foreign exchange rate market, there is a parallel section of the market, also called the black market.

A parallel market (street market) is characterised by non-compliant behaviour, with its own set of rules.

Even though the Central Bank of Nigeria (CBN) has often maintained that the parallel market is not the true reflection of the naira, the sector has grown and continues to serve many Nigerians.

The presidential candidate of the Labour Party, Peter Obi, who is a businessman, had hinted of his intention to remove import and export restrictions, while insisting on a single forex market.

Obi, in his tweet @PeterObi, said, “The current system penalises exporters who bring in forex by forcing them to sell at a rate that don’t pay them when they need to purchase.”