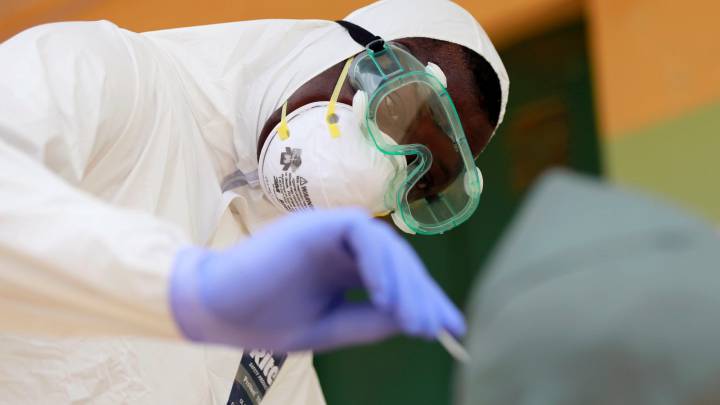 OLAOLUWA Oluwo, 27, confirmed her suspicions in June that she had contracted the coronavirus after the medical result of a COVID-19 test she took at the Lagos University Teaching Hospital, LUTH revealed she was positive.

Before Oluwo went for the test, she was already battling with an asthmatic condition but in early June she could barely perceive the aroma of the food she ate or the fragrance of her body spray.

She also noticed an unusual discomfort whenever she attempts to breathe as the rush of air through her lungs leaves a sharp pain that made breathing a difficult task. Along with the severe fatigue and constant headaches she felt, Oluwo blamed her stress on the Lagos traffic.

“I was not sure what was wrong with me until I started reading about symptoms of COVID-19 online which made me doubt if what I was feeling was mere fever until my health started deteriorating with each passing day,” she said.

After she took the COVID-19 test, an official of the COVID-19 team had asked her to return in two days for the result but after visiting the hospital three times later that week, she was still told the result of her test was not yet ready and this made her very anxious.

Most Nigerians who had been tested for COVID-19 do not get to know the outcome of their tests results or taken into isolation centres, according to a Cable undercover investigation.

However, but through the intervention of a senior health official at LUTH she finally confirmed her worst fear that she was COVID-19 positive.

An official of the Nigeria Centre for Disease Control, NCDC contacted Oluwo on phone three days later, enquiring about her welfare assuring her the NCDC would take her into an isolation centre for further treatment and monitoring.

That day never arrived, despite the repeated calls, she placed to the NCDC helpline for several weeks they never responded or called in to take her into the isolation centre.

“I could not self-quarantine at home effectively because my sibling would always invade my space and the NCDC officials never answered my calls so I had to resort to taking my destiny in my own hands by taking malaria drugs.

Despite the absence of conclusive scientific evidence to support the use of malaria drugs for COVID-19 treatment, she decided to take a chance on it.

“It hasn’t been easy taking the necessary precautions of wearing masks and social distancing for me because people rarely adhere to these rules but the speed of my recovery has surprised me even without taking another test to confirm my status. My breathing is currently normal and I am doing great without fever or complications,” she said.

Thousands of Nigerians infected with COVID-19 like Oluwo may have resorted to self-medication, but the low recorded rates of COVID-19 fatalities in the country tells an entirely different story.

As several Nigerians have abandoned social distancing and wearing of masks that saw moderate compliance in the early months of the outbreak.

As the virus ravaged other parts of the world, Nigeria propped up for the worst impact of the pandemic, ramping up ventilators, stockpiling protective equipment and building isolation centres as it prepared for a potential health crisis.

The World Health Organisation, WHO in a predictive model study published in August had stated that countries with a population ranging from 29 to 44 million people could be infected and between 83,000 and 190,000 Africans could die of Covid-19 if it was not controlled.

A similar prediction by the United Nations, UN, in April also projected that without adequate intervention, about 300, 000 Africans were likely to die from the virus social distancing and wearing of masks were in place.

Contrary to the predictions, Africa’s fatality rates stand at 2.4 per cent with an estimated 35,000 deaths with more than 1.4 million people infected with COVID-19 based on data obtained from  WHO dashboard on COVID-19.

A study published in the Scientific World Journal says the low rates in Nigeria could be partly because of the relatively young population where more than 60 per cent are under the age of 25.

Experts also say expertise in epidemic control from tackling other outbreaks, cross-immunity from other coronaviruses, low travel and outdoor living could also be contributing to Africa coping better.

In terms of the proportion of people who get Covid-19 that go on to die, there were 12 African countries with rates comparable with or higher than the global average rate of 3 per cent as of October, 1.

Data obtained from Our World in Data, a UK project that collates Covid-19 information revealed that Africa accounts for 4.4 per cent of COVID-19 global cases and 3.6 per cent of the total deaths globally, despite, the low testing rates.

John Nkengasong, Director General of the African Center for Disease Control, CDC, he warned that Africa is not out of the woods despite the low fatality rates.

“I don’t think we are over the first wave yet, we have not yet hit the bottom at all,” he said in a report.

Speaking to The ICIR, Chikwe Iheakweazu, Director General of the Nigeria Center for Disease Control, NCDC, said it was too early to assume the coronavirus was a thing of the past in the country because the Nigerians were not experiencing the virus en masse.

“The epidemiological situation in Nigeria varies across states. In some states like Lagos and Kaduna, testing has continued at a high rate but the number of people who test positive has reduced. However, in most other states, the rate of testing has declined as a result of poor demand for testing.

“Therefore, it is still too early to reach a conclusion on the overall epidemiological situation in the entire country. Some countries that recorded a decline a few months ago have begun to record a spike,” he said.

Nigeria has a poor record on health spending which is ussually less than 3 per cent of its GDP, however, the Federal Government has spent N30.5 billion on its COVID-19 emergency response between April to June from a total of N36.3 billion received from donations, according to a report.

“We are working very closely with all states to increase both demand for and access to testing. Many states are setting up more sample collection sites so that Nigerians can be encouraged to get tested if they have symptoms or are at risk due to contact with a confirmed case,” Iheakweazu said.