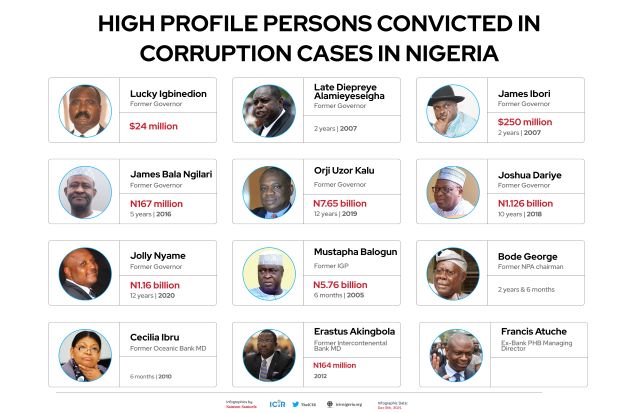 NO fewer than 12 high profile Nigerians have been convicted of corruption since 2005.

Mustapha Balogun was a former inspector-general of police, who was convicted in 2005 for pocketing public money and taking bribes.

Balogun served six months in prison after making a plea bargain with the Abuja High Court. He was put on trial for corruption involving N5.7 billion.

Late Diepreye Alamieyeseigha was a former governor of Bayelsa State, who was sentenced to two years in prison after he was convicted of two charges in 2007.

Lucky Igbenedion was a former governor of Edo State, who was accused and convicted of embezzling $24 million in 2008.

He went down as the first Nigerian governor to be convicted of looting public funds, after the Nuhu Ribadu – led Economic and Financial Crimes Commission (EFCC) charged him with 142 counts of corruption.

Igbenedion was fined N3.5 million after he pleaded guilty to one count of corruption. He was initially sentenced to six months in prison, but pled to pay as an alternative.

Former Governor of Delta State James Ibori was convicted of stealing $250 million by a London court in 2012 and was sentenced to 13 years in prison.

Prior to his conviction in the United Kingdom, Ibori had been arrested by the EFCC. He was charged with stealing public money, abuse of office and money laundering, first in 2007 and later in 2010.

James Bala Ngilari was a former governor of Adamawa State, who was convicted in 2017 after the Yola High Court found him guilty of four charges out of a 19-count charge case brought against him by the EFCC.

Ngilari was sentenced to five years in prison after he was summarily convicted for awarding a contract for the procurement of 25 vehicles at a cost of N167 million ($548,891), without following due process.

He was later acquitted by an appeal court in Adamawa in July 2017.

Former Governor of Abia State Orji Uzor Kalu was convicted in 2019 by the Lagos High Court for N7.65 billion fraud.

He was sentenced to 12 years in prison for using his company, Slok Holdings, to defraud Abia State for eight years.

The Lagos High Court judgment would go on to be overturned by the Supreme Court of Nigeria in 2020 on the grounds that it was a wrong trial.  He was subsequently released from prison.

Joshua Dariye was a former governor of Plateau State who was initially convicted in 2018 for money laundering and criminal breach of trust by the Abuja High Court and later on by the Supreme Court of Nigeria.

From an initial 14 years in prison, Dariye’s sentence was dropped to 10 years imprisonment.

The EFCC had charged him with 23 counts of money laundering that included an alleged diversion of N1.126 billion.

Former Governor of Taraba State Jolly Nyame was convicted by the Abuja High Court in 2018. He was sentenced to 12 years in prison by the court that reviewed his initial 14-year imprisonment sentence.

The EFCC had charged Nyame with a 41-count charge of fraud, amounting up to a total of N1.64 billion.

Former Nigerian Ports Authority (NPA) Chairman Bode George was convicted in 2009 for contract splitting and inflation during his tenure as chairman of the NPA.

He was to serve a sentence for six months for disobedience to lawful order and two years for contract inflation, each of which ran concurrently.

The Supreme Court later voided his jail terms and freed him in December 2013.

Former Oceanic Bank Managing Director Cecilia Ibru was sentenced in 2010 on 25 counts of fraud. She served six months in prison.

Former Intercontinental Bank Managing Director Erastus Akingbola was convicted in 2012 by a London court of misappropriation of funds and insider trading.

He was ordered to pay back N164 million – the amount he obtained in the insider trading- which the judge referred to as an ‘unlawful share purchase scheme.’

Akingbola’s trial continues in Nigeria at the Ikoyi Federal High Court, Lagos State, where he is being prosecuted by the EFCC for an alleged N179 billion fraud committed while he still led the now-defunct Intercontinental Bank.

Low rates of convictions characterise Nigeria’s fight against corruption, as is seen in the cases prosecuted by its anti-corruption agencies.

The ICIR had earlier reported that the EFCC had recorded 2,544 convictions out of 39, 970 corruption cases that it had investigated, ‘representing a 6.36 per cent of the entire cases probed by the commission within nine years.’

In 2020, Nigeria ranked 149 out of 180 countries in Transparency International’s list of corrupt countries. It had a Corruption Perception Index (CPI) score of 25 in the same year, dropping from 29 in 2019.