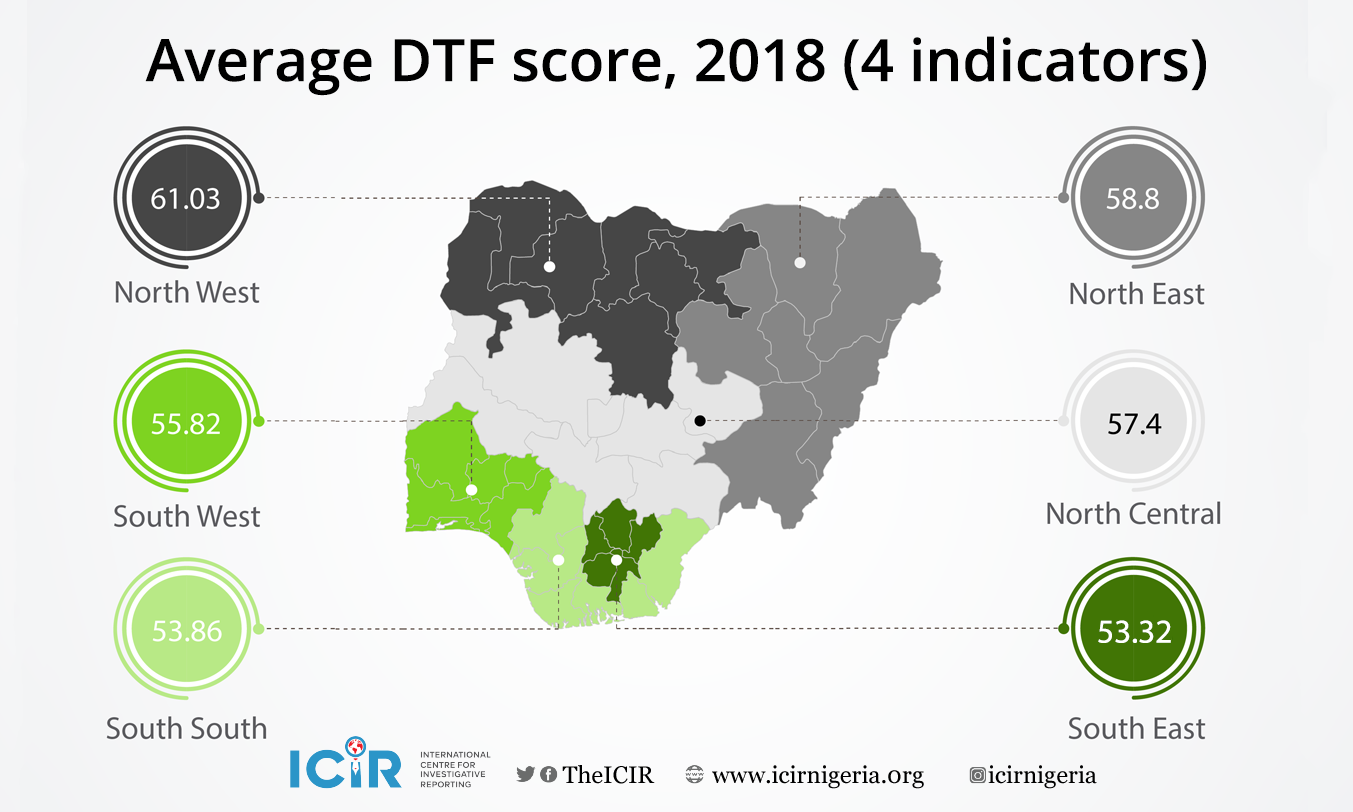 THE four years’ subnational series data on the Doing Business in Nigeria  (DBN) 2018 by the World Bank, comparing Business Regulation for Domestic Firms in 36 States and FCT Abuja with 189 Other Economies, has ranked the North West, North East and North Central top regions that proffer ease of doing business in the country.

Results arrived at from the indicators showed that it is easier to start a business in Abuja, however, on a state-to-state basis, data reveals that Kaduna state has the highest score of 65.97 per cent in terms of business regulations for domestic firms. In other words, Kaduna state offers the best environment for doing business.

Niger, Kano, Jigawa, Ekiti and Bauchi ranks higher in dealing with construction permits. Lagos and Rivers were ranked least states at 37 and 36 respectively.

While Kaduna and Zamfara, Jigawa, Abuja, Kastina emerged are top five states where registration of property is easy and cheap as against Rivers, Kebbi, Cross River and Rivers ranked worst states for ownership registrations.

Ease of Doing Business_in_N… by on Scribd

“It is encouraging to note that the private sector acknowledges the business environment reform agenda initiated at the Federal level is trickling down to several states.

“While these findings are encouraging, substantial variation remains across the country. Going forward it will be critical for the states to engage in peer learning and put in place the institutional mechanisms that will ensure continuous improvement and the sustainability of reforms,” said Rachid Benmessaoud, Country Director, World Bank Nigeria.

Although it is indicated that the gap between regions and states had started to shrink over the past eight years from 2004-2014, recent trends still show that despite an increase in the number of business reforms in the states, these reforms have been mostly in areas where the federal government has pushed for them.

Areas where it is up to the states to improve, such as property registration or construction permitting, have not moved as fast.

“On average, the stamp duty and the CAC registration fee together account for more than half of the total cost of starting a business, this fee ranges from N2,000 in Kebbi and Zamfara to NGN N100,200 in Gombe, making Gombe not only the most expensive state to start a business in Nigeria but one of the most expensive locations globally.

“Improving the business regulatory environment across Nigeria will be key to the country’s economic growth. Nigeria’s heavy dependence on oil has posed structural challenges that have made it difficult to achieve sustained growth, create jobs and reduce poverty,”  the World Bank report states.

Nevertheless, the DBN report purported ample opportunities remain for states, “if the country succeeds in diversifying its economy, the long-term prospects are positive, according to PwC’s projections, Nigeria has the potential to become the world’s 14th largest economy by 2050 and enjoy an average annual growth rate of more than 4 percent in the long run.”

Food prices remain high despite drop in inflation rate to…

Troops intercept 73 men travelling from Nasarawa to Imo with…