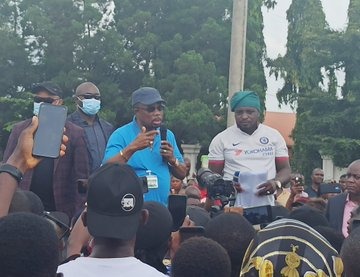 While announcing Nwafor’s sack in a statement on Twitter, the Governor said Nwafor will be prosecuted for his crimes.

“James Nwafor, former OC SARS in Anambra State is sacked and will be prosecuted,” Obiano said.

The Governor, who spoke to protesting youths in the state on Thursday, further noted that he was in support of the ongoing protest by youths across the country demanding an end to police brutality and excesses.

He said he would personally visit all SARS offices across the state to ensure that anyone being held is released immediately, as he promised to communicate with the Federal Government to do the needful to ensure a better life for the youths, for Anambra, and for the nation.

“Today, I joined youths of our dear State to say #EndPoliceBrutality and I support them because they did not only vote and defend their votes in my 21-over-21 victory but all their requests are genuine and germane, and I obliged to honour them all,” the Governor said.

“I felt honoured being in their midst to share in their feelings, and I made it clear that the Federal Government has disbanded SARS but I will personally visit all SARS offices in Anambra State to ensure that anyone being held is released immediately.”

Mohammed Adamu, the Inspector General of Police (IGP) had on Sunday, in response to the continuous protest to end police excesses and brutality in the country had announced the disbandment of the dreaded police unit.

Also, President Muhammadu Buhari had also issued a directive, calling for a reform of the police force.
However, the protests have continued, with the protesters issuing a five-point demand which includes the release of all persons arrested and justice for victims of police brutality.

‘How SARS operatives killed my husband, carted away…