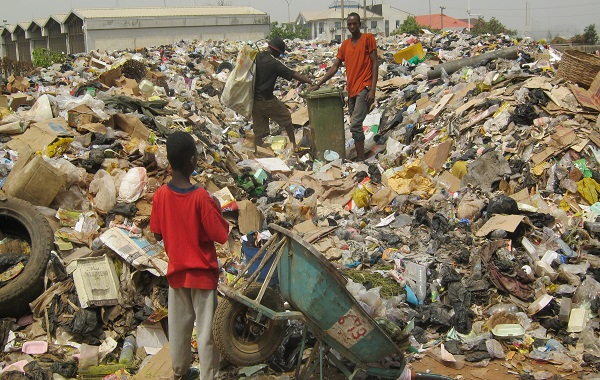 Our reporter, Samuel Malik, writes about the interesting lifestyle that scavengers, commonly referred to in the North as Baban Bola (father of refuse), lead at an enormous dumpsite in Kurudu, in the outskirts of abuja, which is their source of livelihood.

The life of scavengers in the Federal Capital Territory, FCT, can be as demeaning as it can be interesting. They go about with their sacks suspended over their shoulders and a number-seven shaped iron rod measuring about one metre with which they dig into refuse for valuables as their work tools.

These unkempt-looking young men rummage through putrid refuse with apparent disdain and disregard for the happenings around them and the opinion of prying eyes observing them at work.

“I know people look at me scornfully but I am not bothered as I know I am after something,” 19 years old Suleiman Baba said as he emptied his sack and began to sort the contents.

There are others like Baba who live at a vast dumpsite situated at Kurudu, a rapidly developing district in the Abuja Municipal Area Council, AMAC. The area is dotted with beautiful new buildings yet plagued by the sight and stench of refuse.

The young men, who live in makeshift shelters built with tarpaulin sourced from the waste, have embraced a communal life complete with rules instituted to checkmate the possible excesses and foster harmony with members of the host community.

While many residents of Kurudu complain bitterly about the stench and the health risks posed by the dumpsite, these guys – most of whom are from Kano state, with few from Katsina, Sokoto, Gombe Bauchi, and Kaduna states- are grateful for a means of livelihood amidst harsh economic realities.

With over 300 of them based there, the employment that the waste dump provides cannot be ignored. The scavengers gather materials ranging from metals to paper, with every piece priced according to its importance. Aluminium tops the range, selling at N100 a kilogramme. It is closely followed by cans at N80, metal at N30, and paper at N20.

“The most important thing is that it pays our bills and we do not have to go begging. We thank God because business is good as we are able to take care of ourselves and cater for our families,” says Ahmadu Mohammed, who is in his late 30s and is third in command.

Having lived and done business there for over six years, Mohammed said it has been worthwhile, especially for his seven children, all of whom he says go to school.

“My children go to school, both government and private and it is from here that I pay their fees,” he said proudly.

As is normal with businesses world over, there are bad times but even when they arrive, their power of endurance and experience in the trade mean they always survive. Key to this is the relationship they build with the middlemen who serve as links between them and the end users of their finds – recycling companies.

According to Mohammed, these middlemen can become life savers when the need arises.

“They sometimes pay deposit before we source the materials they want and our relationship is so cordial that even when we are broke, we go to them to give us money, which will be deducted when they are paying for the goods,” he revealed.

Shuaibu Danladi, 30, has operated at the dumpsite for four years and, like Mohammed, he has no complaints. With a wife and four children back home in Kano, he sees them at least once in six weeks, just like others.

“I am determined to see that my children go to school, even though I did not, and that is why I am so focused here. Business is fine but sometimes you need luck and when that happens, you may find expensive jewellery and some of our colleagues do really get that lucky, especially if the refuse comes from all the big estates,” he said.

The stench that wafts constantly from the dumpsite makes any long stay with the scavengers an unpleasant one but Mohammed explains the down to earth way they deal with it, which makes them sometimes forget the smell even exists.

“The nature of our work makes it difficult to cope without smoking marijuana or taking hard drugs or drinks, as they help us to deal with the stench of this place. We have become used to the stench so much so that it does not bother us any longer. In fact, we do not perceive any smell and you are only complaining because you are not used to it,” he said.

Their demand for drugs has created a market that is now being sustained by dealers and this naturally attracts the presence of law enforcement agents such as police and soldiers. (There is and Army post service estate a stone throw from the dumpsite).

The scavengers allege that while the soldiers come to the dump site to get free marijuana, the policemen who are a common sight there are more interested in getting settled by the boys to avoid arrest.

“Men of the Special Anti-Robbery Squad, SARS, collect N10, 000 weekly from sellers of exhibits like marijuana, who, like us, have their own union and enjoy a good relationship with us because we are their major customers. The soldiers who come here only come to ask for free marijuana, not to bother or harass us for our work. If they come to harass us, it is because some of our boys have done something wrong like taking something useful belonging to them,”Muhammed explained.

He further explains that the need for a union, particularly for scavengers, is to monitor and regulate the activities of members and ensure that there is peaceful coexistence with their host community. Membership of the union, Association of Bola-Bola and Craftsmanship, is open but with conditions.

“Every member is duly registered and has an ID card and even though membership is open, we do not just admit anybody anyhow. We really vet whoever wants to be a member and require that they provide a surety.”

Every member is expected to attend weekly meetings on Fridays and come with N50.

“The money we contribute belongs to everybody. If someone is sick and needs to be taken to a hospital or taken home, such money becomes very useful. Not long ago, a member died and it was from this money that we transported the corpse to his parents in Kaduna state,”Mohammed said.

On the dumpsites, rules are enforced and any infraction is dealt with promptly. For instance, stealing is strictly forbidden and cannot be tolerated under any circumstances. Danladi explained how a thief is treated:

“If someone comes here with something that we suspect to be stolen and he’s not one of us, we send him away. However, if he is one of us, we find out how he came in possession of it and if anybody comes to report that their property was stolen and we discover the suspected object matches the description or if they identified it, we hand over the property and apologise. If they accept the apology and leave, as a rule, we punish the scavenger with 50 lashes and send him away. But if the owner of the property refuses to accept our apology, we hand the scavenger over to the police.”

“We relate very well with our host community and there has not been a major complaint about our activities, save for the occasional and minor incidents involving some of our boys who in the course of scavenging, sometimes take things they should not,” he added.

They are not unaware of complaints from residents of housing estates in the neighbourhood regarding the need to relocate the site and they say they have no objection.

“Wherever there is filth, especially of this magnitude, you find us there because we are sure of getting something valuable. We have no problem with the relocation of this dumpsite should the need arises, and wherever it is relocated to, as long as we are allowed to scavenge, we are okay,” said Salisu Usman, who is not more than 20 years old.

As far as the scavengers are concerned, they are there for a purpose and that is to fend for themselves and their families back home. Thus, women and children are not allowed to live at the dumpsite.

“We do not allow women and children to live with us here because if women are allowed here, there could be problem while children could easily contact diseases. The only women you see here are those that come to hawk and sell commodities, after which they leave,”Mohammed stated.