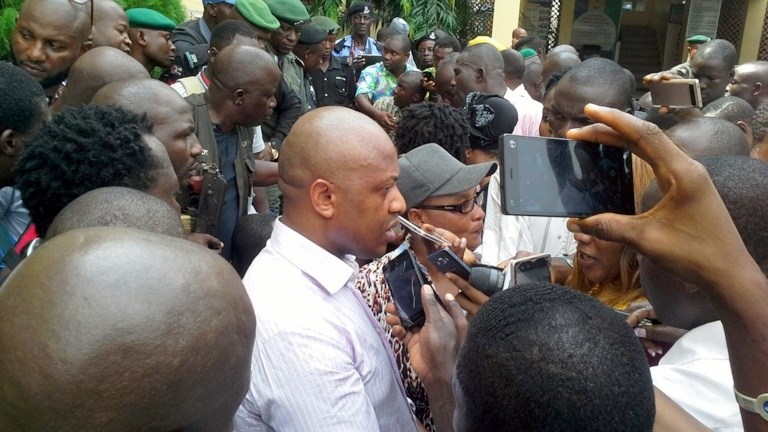 Hours after Chukwudumeme Onwuamadike, the suspected kidnapper better known as Evans, pleaded guilty to charges of conspiracy and kidnapping, Olukoya Ogungbeje, his lawyer, said the plea would be changed to “not guilty” at the next court sitting.

Ogungbeje said the police coerced his client to plead guilty to the kidnapping charges before a Lagos State High Court in Ikeja.

He alleged that the police threatened to kill the suspected kidnapper.

In a statement emailed to the media after Wednesday’s proceedings, he said his client would change his plea to “not guilty” at the next court sitting.

He said Evans’guilty plea was not out of free will, adding that the defendant was hoodwinked and coerced into pleading guilty having been in detention for a long period.

The lawyer stated that since June 10, 2017, when the suspect was remanded, the police had not allowed family members and lawyers have access to him in custody.

He argued that the guilty plea of the defendants on Wednesday was of no effect, as the suspect was not given the opportunity to be guided by lawyers before the charges were read to him and other suspects.

He added that his client was only served with the charges in the open court on Wednesday and the judge also turned down the plea for an adjournment to afford his client time and facilities as guaranteed by the Constitution to confer with the defendant.

“The information/charge sheet was served on us in open court hence, the need to confer with our client to enable us avail ourselves with the constitutional right of adequate time and facility to put up our defence,” Ogungbeje said.

“After the purported guilty plea of our client and the court rose, we stressed to have brief discussion time with our client and he told us clearly that the police told him to plead guilty failure to which they would kill him.

“This is definitely unconstitutional and we intend to challenge this unconstitutional procedure for hoodwinking, undue influence, brainwashing and coercion on an accused into entering a guilty plea against his wish and free will.

“He pointedly told us that he will change his police-motivated guilty plea to not guilty at the next adjourned date.

“It is settled law that plea of guilty must be made voluntary and direct devoid of any influence, coercion and manipulation.

“In the meantime, after our brief conferring with our client in open court, he made it known to us that he will change his Police motivated guilty plea to ‘not guilty’ at the next adjourned date.”

He insisted that he, as defence lawyer, had “a responsibility to assist the cause of justice in accordance with the law”.

“This press statement is necessary for the Public to be well informed and proper education of the Evans’ case,” he added.