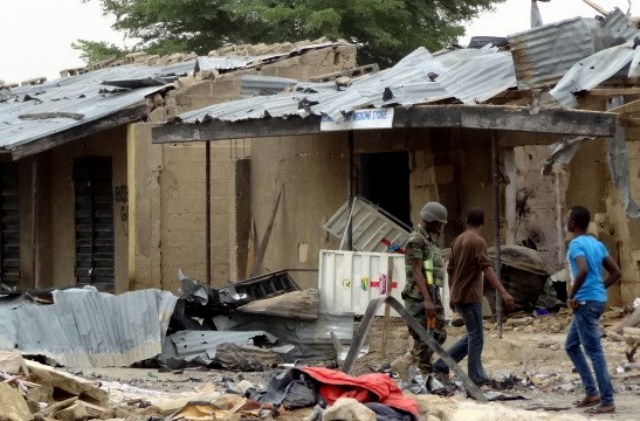 More details are emerging about what happened in the deadly Boko Haram raid in Rann, Borno state, that left security agencies and the humanitarian world in grief.

The attack on Thursday, March 1, resulted in the death of four soldiers, five policemen and three aid workers, with chilling images suggesting that the deceased were tied before being shot. The army’s famed 122 mm howitzer was also taken a way by theinsurgents.

Three other aid workers were also abducted; these included a nurse who sent a WhatsApp voice message to her friend. The attacked led to the evacuation of more than 40 aid workers and suspension of humanitarian services by both the UN and Medecins Sans Frontiers (MSF).

One soldier lost his life in Maiduguri due to heavy loss of blood from multiple gunshots.

According to findings by the ICIR, Boko Haram had attacked Rann earlier but were repelled by the soldiers, only for the group to reinforce, return and inflict a heavy damage on the town, particularly the military base. The exact time of the first attack could not be ascertained.

In addition to the casualties, a military contact very familiar with Rann, having been deployed there several times, told the ICIR that the military also suffered logistical losses.

The 122 mm artillery gun is one of the critical support weapons that the military is proud of in the fight against Boko Haram. Though old, the Soviet weapon was produced from 1939 to 1960 and is still potent, as it can reach a range of almost 12 kilometres and can fire five to six rounds per minute.

IDPs were, however, not affected, suggesting that the attackers were likely from the Abu Musab al-Barnawi faction. Al-Barnawi has systematically tried to warm his way into the hearts of civilians by ensuring that whenever his men go out on raids, villagers and their properties are left intact. In fact, they are known to announce to villagers that ‘infidels’ (referring to security forces) not them, are the targets.

Rann is held by one of the companies under 3 Battalion, headquartered in Gamboru-Ngala.

With a population of 40,000, the town relied almost entirely on MSF for medical services. The international medical humanitarian organisation has been in Rann since January 2017, with a permanent medical team deployed since September of the same year. The organization is also one of the few NGOs working in very-hard-to-reach areas in the northeast.

This is the second major incident involving Rann in little over a year. On January 17, 2017, the Nigeria Air Force, in what it said was an accident, bombed the IDP camp and killed more than 100 civilians, including three aid workers contracted by MSF to provide water and sanitation services because water is a major problem for residents of the town.

The latest attack by Boko Haram came less than a month after the military claimed Boko Haram had been completely defeated. In fact, two weeks after this claim, the group carried out a daring replica of the 2014 Chibok abduction of schoolgirls.

On February 19, Boko Haram fighters invaded Dapchi, headquarters of Bursari Local Government Area of Yobe State and went away with 110 students, 108 of them students of the Government Girls Science and Technical College. The other two were Primary 6 pupils and children of staff of the school. The one-hour attack resulted in an embarrassing blame game between the military and police about who was in charge of security in the town, and culminated in the State Governor being heckled by parents when he addressed them.

The state government had announced after the attack that some of the girls had been found and when parents heard the Governor would be visiting the town, they trooped from different villages and towns to see if their daughters were among those found.

When the Governor announced that it was a wrong information and that no girl had been found, some parents fainted while others decided to show him exactly how they felt by pelting him.

The military official spokesmen have refrained from publicly commenting on the Rann attack.

EDITOR’S NOTE: This piece has been edited to clarify that the howitzer was burnt, not taken away by Boko Haram, as first reported.

OPERATIVES of the Economic and Financial Crimes Commission (EFCC) on Tuesday stormed the Abuja...

ABOUT forty residents of Borno were reportedly killed after insurgents invaded farms in Rann,...