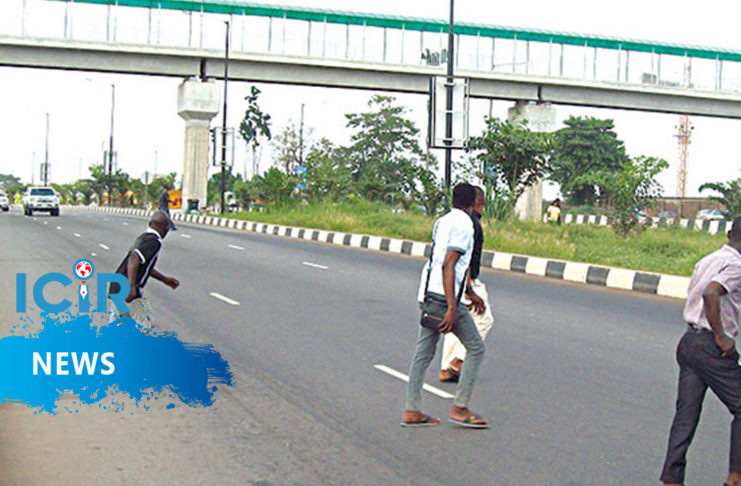 A CONSPICUOUS feature of highways in the Federal Capital Territory (FCT) are pedestrian bridges. Given the ever busy nature of the roads, they are found in several parts of the city to aid residents crossing the highways without the risk of getting hit by cars. However, rather than make use of these infrastructures, some residents choose to risk their lives, dashing across highways in a game of wit to avoid being hit by fast-moving vehicles.

MANY residents of the FCT have offered various reasons for the neglect of pedestrian bridges, including its relative distance from bus stops in some cases and the extra time required to complete the journey across.

Emmanuel Patrick, a resident of Gishiri told The ICIR that the bridge at NICON junction was quite a distance from the bus stop.

He said walking to the bridge, crossing, and trekking back to the bus stop took a lot of time and energy, as against simply dashing across the road.

“Looking at the distance from where I have to trek, then come down (from the bridge) before I get a cab, when you are late, you just have to take the risk,” he said.

Climbing the steps on the pedestrian bridge at NICON junction is a herculean task for Esther Onyeno, who resides within the area.

“The pedestrian bridge is too far. And the steps, if you climb the first one, you won’t like to climb it the next time. The steps are not spaced, and it is usually painful on the thighs,” she said.

In Abuja, most highways are usually divided by concrete barriers and barbed wires which serve as barricades against road crossing. However, some of the barricades were vandalized in many areas.

The FCT Administration had, thus, resorted to constructing stronger road barricades with iron fences in areas such as Wuye and Area 3.

At Area 3 junction, this construction is still ongoing, but this does not sit well with many residents and commuters.

Some could still be spotted crossing the expressway and jumping through the barriers despite the ongoing construction.

In an interview with The ICIR, a commuter along the Area 3 junction Sam Omoruyi said the barricade was increasing the suffering of residents in the area. This problem is despite the presence of a pedestrian bridge a short distance away.

“The money the Minister spent in putting this barricade would have been enough to give us a pedestrian bridge almost two, in this environment.

“I think the one they gave us which is even down there is too far from this junction. You can even see he did it to help the masses, but the suffering is even too much,” he said.

However, the barricade was a welcome idea for some others, as the dash of death by residents sometimes resulted in fatalities.

Taxi driver Felix Samson told The ICIR that a vehicle had hit a commuter along the Area 3 expressway just the previous day.

“Yesterday, an accident happened; a jeep was coming from Area 1 from the other roundabout. People were crossing, and the man did not even stop.

“He finished some women there yesterday. We were there.  But you can see, even when they put the barbed wires, people are still forcing themselves to climb through,” he said.

A pedestrian along Area 3 expressway Emmanuel Ekele urged residents to make use of the bridges rather than dash across the roads, as many lives had been lost in accidents.

In an interview with The ICIR, former FCT Director of Public Transportation Adewale Alebiosu attributed crossing of highways by residents to indiscipline.

“The major issue is indiscipline. In Abuja, people expect to come out of their rooms and join transportation; it is not done anywhere in the world. Abuja is a well-planned environment. It is so planned to the extent that everything you see in Abuja is according to a master plan,” he said.

He also noted that pedestrian bridges could not be situated directly at bus stops as it would create problems for motorists and other road users.

“You don’t put a pedestrian bridge directly at the junction. You have to leave clearing for vehicles that are entering the road,” he said.

He said there were no serious legislation regulating road crossing in Abuja due to the difficulty of instituting a lawsuit.