This is how Ondo election will be shaped by group politics, and numbers

...Whoever wins will be elected by the minority of Ondo people. 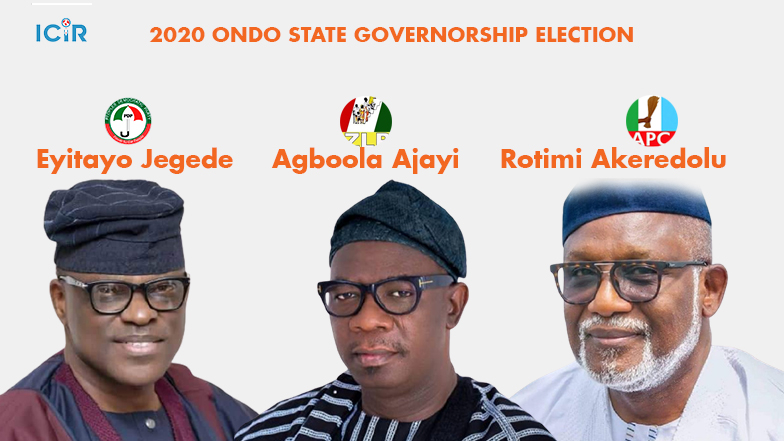 ON Saturday, October 10, the people of Ondo State in the southwest, Nigeria will again elect a governor for another four years. Independent National Electoral Commission’s record shows that 17 candidates are in the race to Alagbaka House, but observers of Ondo politics have ceded the arena to three gladiators.

One of them is the incumbent, Governor Oluwarotimi Akeredolu, SAN, a candidate of the All Progressive Congress, APC. The others are Eyitayo Jegede, SAN, of the People’s Democratic Party, PDP, and Agboola Ajayi of the Zenith Labour Party, ZLP – all of them, tested politicians and accomplished lawyers.

Akeredolu, 64, was the Ondo State Attorney-General and Commissioner of Justice between 1997 and 1998 during the administration of Navy Captain Anthony Ibe Onyearugbulem. He contested the governorship election in 2012 on the platform of the defunct Action Congress of Nigeria, ACN, and lost to the then incumbent governor, Olusegun Mimiko. Four years later, he won the governorship election with 244, 842 votes against  Olusola Oke of Alliance for Democracy and Jegede who scored 150, 380 and 126, 889 votes respectively.

Jegede, on the other hand, has been the flagbearer of the PDP since 2012 when he defeated the then deputy governor, Hon. Saka Lawal at the party’s primary. In 2016, he also defeated Jimoh Ibrahim to clinch the PDP ticket, and this year, he defeated Ajayi, the incumbent deputy governor who recently defected from APC.

Jegede, like Akeredolu, was also the Attorney-General and Commissioner for Justice between 2009 and 2012 during the first term of Mimiko, and a Senior Advocate of Nigeria.

Before he joined politics, Ajayi, the ZLP party flagbearer, was also a lawyer and businessman. He was a former chairman of Ese Odo LGA, a former member of the Federal House of Representatives under the PDP, and now a deputy governor.  He recently defected to PDP, and later to ZLP after the relationship between him and Governor Akeredolu broke down.

Therefore, considering the personal achievements and political experience of the three candidates, each of them stands a good chance to win the election on Saturday. Yet this election will not be decided by experience and accomplishment as much it will be by geography and group politics.

There are three senatorial districts in Ondo State: Ondo North, Ondo South and Ondo Central. Between 1999 and 2020, each of the three zones has produced a governor.

Among the four governors, only Mimiko has completed an eight-year term. Agagu’s second term was terminated when the court voided his election in February 2009 on account of electoral irregularities. Adefarati did only one term and was defeated by PDP in 2003.

So, if Akeredolu wins on Saturday, he will be the first governor from Ondo North to win a second term. But his chance appears tougher this time around than it was in 2016. 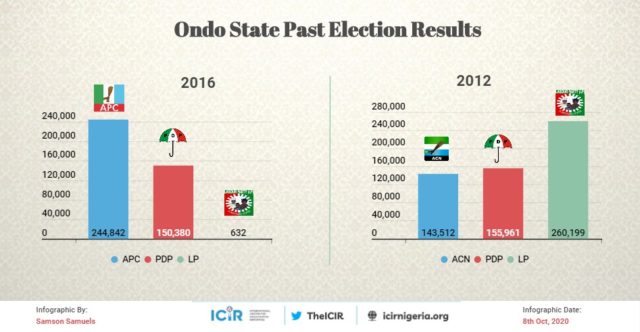 Though the governor, like an adept chess player, has foreseen this pitfall and has chosen Lucky Orimisan Aiyedatiwa, a native of Obe-Nla, in Ilaje Local Government Area, Ondo South. But it remains uncertain if Aiyedatiwa can pull the political weight as much as the deputy governor can.

Therefore, for Akeredolu and Jegede, Ondo South is going to be the battleground as the two of them are likely to win in their zones. But while Akeredolu may record a landslide victory in Ondo North, it may not be so for Jegede who will have to lock horns with  Ajayi in Ondo Central and Ondo South where both have chosen their deputies respectively.

It is worth mentioning, however, that Akeredolu’s stronghold has the lowest registered voters compared to other zones. Among the 1,822,346 that registered to vote on Saturday, 32 percent are from Ondo South, 41 percent from Ondo Central, and 27 percent from Ondo North. Therefore, the outcomes in the two zones will largely determine the victory or defeat of Akeredolu.

Notwithstanding, local government areas from his zone were among the seven LGAs that recorded the highest number of accredited voters in 2016, according to INEC record.

There is a growing concern, however, about voters’ apathy in Nigerian elections, and the situation is not different in Ondo State. Since 2012, the voter’s turnout has been dropping steadily. Out of the 1,638,950 registered voters, only 38.1 percent voted in 2012. Four years after, 1,647,673 voters registered to vote, but only 35.2 percent eventually voted. In 2016, the situation was worse. Out of the 1,822,346 registered voters, only 32.4 percent elected the governor.

According to the census estimate, Ondo is 4.7 million in population, and only 1,822,346 are registered to vote on Saturday. Even every registered voter cast the ballot, which is less than 40 percent of the population,  it would still be a minority vote.

In 2016,  584, 997 people voted. If every one of them votes on Saturday, they would have represented o.1 percent of the entire population. Therefore, whoever wins the governorship election this weekend will be elected by the minority of Ondo people.