Business and EconomyEnergy and Power
Nurudeen AKEWUSHOLA
May 13, 2022
Advertisement

Study: In Ibeju-Lekki, 32,685 primary school pupils are at risk of flooding

MORE than 800 households in Sagbagyi, a community in the nation’s capital have been thrown into darkness following the collapse of the transformer supplying them electricity.

The community which is being managed by Abuja Electricity Distribution community(AEDC) had spent about N800,000 maintaining the transformer in 2022 alone before it finally collapsed early April plunging them into darkness.

The AEDC is one of the eleven companies licensed by the Nigerian Government to distribute power to customers since the privatisation of what used to be Power Holding Company of Nigeria (PHCN) in September 2013.

The community which started with less than 200 households raised a sum of 3.5 million in 2016 to purchase a transformer after failed attempts to get one from the government but as the population grows, the transformer could no longer withstand the workload leading to concurrent trippings before the transformer finally broke down.

The ICIR gathered that Sagbagyi community had earlier suffered a three weeks blackout in January due to the transformer collapse which cost about N800,000 to fix. Thereafter, the community resorted to load shedding. The planned rotation supply of electricity continued for a while before the transformer finally broke down.

Some community members who spoke to The ICIR reeled out their frustrations on how the power outage has paralysed their businesses and made lives difficult for them.

Chinwe who runs a photocopy and printer centre now not only need the energy to power her generator she still needs to take it for repairs or spend hours in a queue to purchase fuel for it.  This has become her new routine since March when the transformer packed up.

“It is very hard because we are not even ‘getting’ market again because of the issue of electricity. No work. Some people prefer light over the Generator. Because the amount we charge for the generator is higher than the amount we charge when there is light. So, as there is no light for about a month now, it has not been easy at all,” Chinwe said.

Chinwe also explained that for her to get fuel for generator she needs to carry it to the fuel station otherwise she will not be attended too.

Many fuel stations in Nigeria do not sell fuel into jerricans, those who wish to buy for their generators will either have to come with the generator set or disconnect and come with the fuel tank.

Lawrence Adeboye, opened her hairdressing shop towards the end of March but she did not have the opportunity to utilise the electricity. According to her, some of her working tools have been rendered useless due to a lack of power supply.

“As you can see. Looking at me, you can see sweat all over me. Doing work without a fan is not easy. In fact, there are some hairs that I need to do but because there is no light I can’t do them.” She also complained about the hassle of having to take the generator to the fuel station before she can buy fuel.

Jeremiah John explained that his Laundry business has suffered a huge setback due to the blackout as he spends a larger part of his income on fuels.

“I spend more than N2000 every day to buy fuel. Just to serve my customers well,”  he explained. “if I am not serving them because there is no light they will be taking the work to another place and it would later eventually affect my business”.

The frustrations eventually led to a protest by the community on May 6 intervention. Still, it yielded no result.

Nwabuike said the community spends most of its annual income on fixing the intermittent faulty transformer and several efforts to get help from the AEDC were not successful.

“Sometime in January this year, the transformer stopped working, we had to spend about N800,000 and throughout those weeks they still brought the bill,” he said

“Early April, the transformer broke down again and we felt like it is not sustainable to keep spending money on it again and that is why we shut down the transformer until appropriate authorities come to our aid and from the information that we have they said they are the ones in charge of maintaining the transformer. 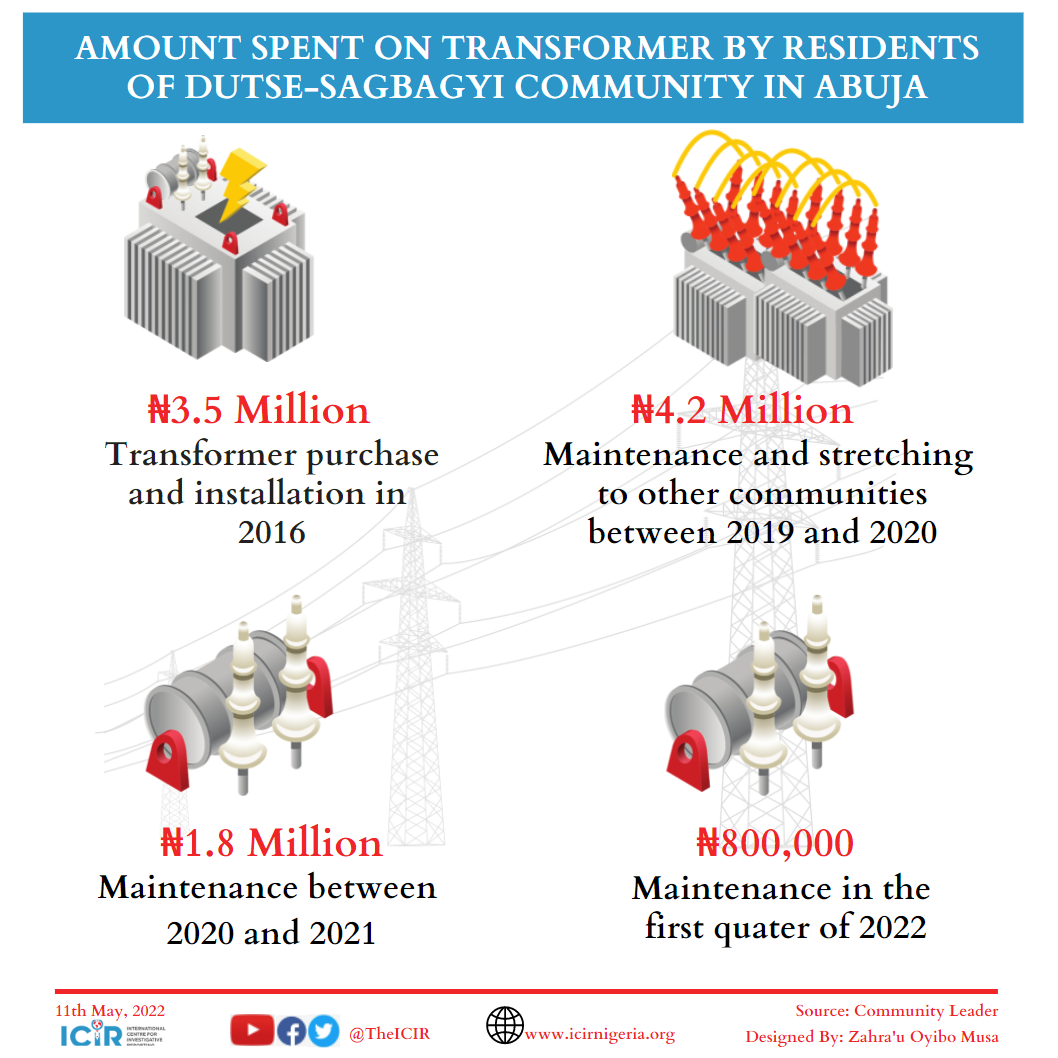 “We have written to them. We wrote to AEDC and we copied NEC and other agencies in charge. They came and said they would fix the transformer- all cost on them. But we still told them that a single transformer cannot solve the problem again. Every member of this community still pays their bills; we do not deserve this suffering,” Nwabuike said.

He recalled that the community members were charged N60,000 per household to purchase the collapsed transformer noting that each household has been asked to contribute N15,000 to purchase a new transformer since there seems to be no green light from AEDC.

The Consumer Right and Obligations Rules of the Electric Power Sector Reform (EPSR) Act, 2005, states that “It is not the responsibility of electricity customers or community to buy, replace or repair electricity transformers, poles and related equipment used in the supply of electricity.”

This was also re-emphasised by the Federal Competition and Consumer Protection Commission (FCCPC) in April when the agency stated that “Faulty transformers are supposed to be replaced by the Electricity Distribution Company (DisCo) within forty-eight hours of the official complaint being made. The Electricity Distribution Company (DisCo) is responsible for such replacements or repairs”.

The agency notes that  “if the Electricity Distribution Company (DisCo) is unable to speedily replace the faulty transformer, residents may go into discussions with the company and agree on the terms of the replacement of the affected transformer if they wish to assume the responsibility of the company.”

Electricity Consumer Right/Responsibility: It is not the responsibility of the customer or the community to purchase, replace or repair transformers, poles or other associated equipment used in the distribution of electricity. pic.twitter.com/lki9gHL94R

When contacted, the Chief Marketing Officer of AEDC, Donald Etim told  The ICIR that the agency is aware of the incident and working to restore power in the affected community.

“The transformer servicing that area had an open circuit on the LV side (fault), same has been conveyed to HQ repair workshop to be fixed. The maintenance team is waiting for its return so it can be reinstalled,” he said.