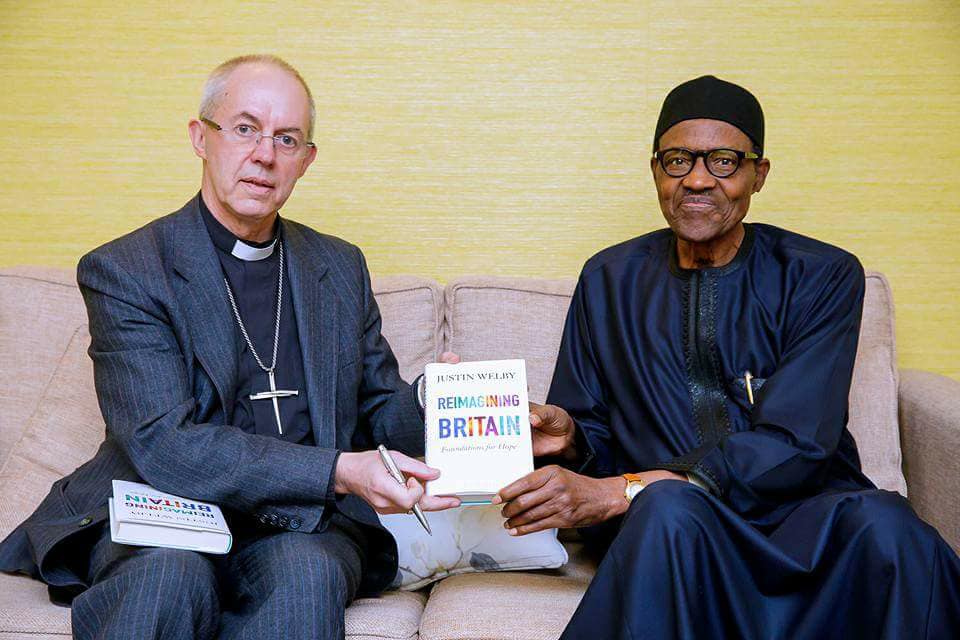 President Muhammadu Buhari says he is running for a second term in office because majority of Nigerians appreciate what his government is doing.

According to a statement released by Femi Adesina, his Special Adviser on Media and Publicity, Buhari said this on Wednesday while receiving Justin Welby, the Archbishop of Canterbury, in London.

“I declared before leaving home because Nigerians were talking too much about whether I would run or not,” he said.

“So, I felt I should break the ice. We have many things to focus on, like security, agriculture, economy, anti-corruption, and many others. We needed to concentrate on them, and politics should not be a distraction. The majority of Nigerians appreciate what we are doing, and that is why I am re-contesting.”

He also said his administration had been able to save billions of dollars through cutting rice importation “by about 90%”.

“People who rushed into petrol money have now gone back to agriculture,” he said. “Even professionals have gone back to the land. Nigeria should be able to feed itself comfortably soon. I am so pleased.”

On the farmers/herdsmen crisis, the President said the problem has always been there but has been worsened by the incursion of gunmen from the Sahel region into West Africa.

“These gunmen were trained and armed by Muammar Gadaffi of Libya,” he explained.

“When he was killed, the gunmen escaped with their arms. We encountered some of them fighting with Boko Haram. Herdsmen that we used to know carried only sticks and maybe a cutlass to clear the way, but these ones now carry sophisticated weapons. The problem is not religious, but sociological and economic. But we are working on solutions.”

He also assured Nigerians that his government is quietly finding a solution to the abduction of Leah Sharibu as “making noise would not help”.

“We are collecting as much intelligence as possible, working with the Red Cross and other international organizations,” he said. “There are too many fraudulent people around, who claim they can do this and that. We won’t deal with them. That was how we got the Dapchi girls back, and the Chibok girls.”

Welby gave Buhari his best wishes regarding his re-election mission. He observed that “great statesmen are those who run for the good of their country” and promised Buhari that his church, though neutral, would pray for him.

He also presented Buhari a copy of his recent book, ‘Reimagining Britain. Foundations for Hope’.

Chat us on WhatsApp
Advertisement
Previous articleCourt remands Dane who ‘killed’ Nigerian wife Alizee, daughter
Next articleI’d resign if any politician told me to do something wrong, says JAMB registrar