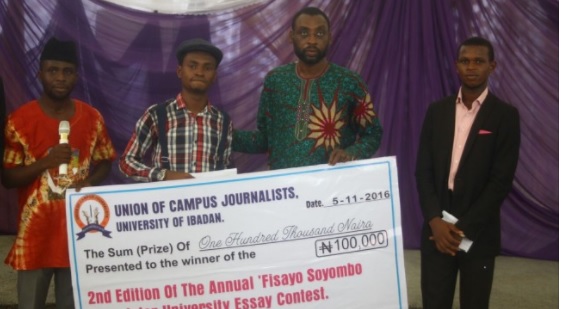 The Union of Campus Journalists (UCJ), University of Ibadan, has announced a one-month extension to the deadline for submitting entries for the 2017 edition of its annual inter-university essay contest.

Samuel Arowosafe, 30th President of the organisation, made the confirmation in a press statement emailed to the ICIR on Thursday.

Now in its third year, the contest requires participants to answer the question: ‘Is It Time To restructure Nigeria’?

The topic was arrived at in view of calls that have been mounting since the beginning of the year for the country to be restructured.

Bearing in mind that even the ruling All Progressives Congress (APC) is itself unsure of what the restructuring debate represents, and recently constituted a Committee on Restructuring, participants will have no limits to which they can advance their ideas.

“The new deadline for submission is Wednesday October 10, 2017,” Arowosafe said.

“We’re not at all short of entries at this point; in fact, we have already received the record application since this contest began three years ago.

“However, we’re making this extension so that more students outside the south-west can participate, because this contest is not a UI affair but a national one.”

The inter-university essay contest is endowed by ‘Fisayo Soyombo, Editor of the ICIR, who led an executive council to stage the organisation’s first essay contest when he was UCJ President in 2007.

UCJ is the umbrella body of press organisations in halls of residence, departments, faculties and religious institutions in UI and the University College Hospital (UCH).

Founded in 1987, it has a history of producing top-class journalists, including Laolu Akande, its second President, who is now spokesman to Vice President Yemi Osinbajo.

Full details of the guidelines for the contest are available here.

Wike: SARS policemen are the armed robbers, kidnappers in Rivers