In Edo election, the ‘Oshiomhole factor’ pushed critical issues to the sidelines 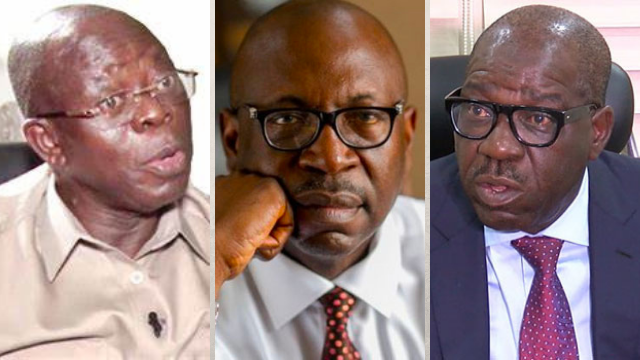 EDO State governor, Godwin Obaseki, might have actualised one of the declarations he made during the campaigns – to protect the interests of the majority of the people and bring an end to godfatherism, which he said is a threat to the growth and development of the state – but he will have a lot on his plate in his quest to truly Make Edo Great Again.

Obaseki had centred his campaign message around the acronym ‘M-E-G-A’, which stands for ‘Making Edo Great Again’ but while the governor and his supporters bask in the euphoria of  a narrowly-won second term in office, they will soon realise that ‘critical developmental issues’ concerning the real ‘dividends of democracy’, were relegated to the sidelines in the pre-election campaign.

Rather the campaign was characterized by fury and sound causing anticipation of violence and bloodshed which eventually did not materialize.

As it turned out, the election was more of a contest between Obaseki and his former ‘godfather’, Comrade Adams Oshiomhole, a former governor ‎of Edo State who had picked Obaseki to succeed him in 2016.

Back then, Oshiomhole and Obaseki were in the All Progressives Congress but by the time both men fell out four years later, the incumbent governor, Obaseki, was forced to leave the party for the Peoples Democratic Party, following his disqualification from the APC governorship primaries. Interestingly, in his role as the godfather of Edo politics, Oshiomhole, who was the national chairman of the APC, had turned to Pastor Osagie Ize-Iyamu, the man he had  worked against in 2016, as the man best qualified to become the governor of Edo State in 2020.

Back in 2016, Ize-Iyamu was the PDP governorship candidate while Obaseki flew the flag of the APC but as a result of the Oshiomhole factor, both men swapped teams in 2020.

The development meant that Oshiomhole became the major focus of the election, despite the fact that he was not a candidate.

Even his eventual removal as the national chairman – a consequence of the ‘war’ with Obaseki – ‎did not in any way diminish his central position in the Edo governorship poll.

As it were, Oshiomhole had, while campaigning for Obaseki against Ize-Iyamu in 2016, made some unsavoury comments about the latter’s character while also highlighting the sterling qualities of the former.

Although, questions have often been raised about moral principles of the Nigerian politicians, it was never going to be easy for anyone to get away with the type of volte face that Oshiomhole had to make in the choice of the candidate of the APC in Edo State.

As a result, attention was focused on Oshiomhole’s role as the godfather of Edo State politics more than the performance of Obaseki in the first tenure.

Parallels were drawn with Lagos State, where a former governor, Asiwaju Bola Ahmed Tinubu, a national leader of the APC, has been deciding who becomes the governor since 2007 when he left the office.

It also did not help matters that Oshiomhole had, himself, declared that he has ended ‘godfatherism’ in Edo politics after he emerged governor, despite opposition from political stalwarts like the late Chief Tony Anenih, a former chairman of the Board of Trustees of the PDP, and the Esama of Benin, Chief Gabriel Igbinedion.

With benefit of hindsight, it now appears that the umbrella body of APC state governors, the Progressive Governors Forum, saw the danger the party is facing in Edo State due to the ‘Oshiomhole factor’ when, in August 2020, it cautioned the former national chairman over his involvement in the governorship campaign.

Director General of the PGF, Salihu Lukman, had, in a statement, urged Oshiomhole to ‘calm down’, noting that Ize-Iyamu should be allowed to lead his own campaign.

“Pastor Osagie Ize-Iyamu, is an onlooker. We need to appeal to Comrade Oshiomhole to ‘calm down’. This campaign is not about his person,” parts of the statement signed by Lukman read.

The PGF director general also went ahead to add, “If‎ the Edo State APC campaign is to go ahead this way, when APC wins the election who will run the affairs of the state as Governor? Is it Comrade Oshiomhole or Pastor Ize-Iyamu? If our party wants Edo people to vote for our candidate, Pastor Ize-Iyamu must be very visible and seen as the face of the campaign.”

While the points raised by the Progressive Governors Forum‎ concerning Oshiomhole’s involvement in the campaign proved very apt, Tinubu’s role as the ‘godfather’ in Lagos, as also highlighted in the statement, was also another key point that contributed in shaping the views of the Edo electorate. Advising Oshiomhole on how best to go about his role as the kingmaker, the statement added, “Comrade Oshiomhole should take a backseat and play the facilitatory role our leaders play in all similar circumstances.

Lagos State governorship election since 2007 present a good model. Without any doubt, our leader, Asiwaju Bola Ahmed Tinubu, may be argued to be very influential in the emergence of candidates, from Babatunde Raji Fashola, Akinwumi Ambode to our current governor, Babajide Sanwo-Olu.”

It was not surprising that the claim, ‘Edo is not Lagos‎’, started trending across various social media platforms as Obaseki’s group pushed ahead with their ‘end to godfatherism’ message.
‎‎
So, while Obaseki might have performed well, or not performed well, in his first four years in office, it happened that, rather than having to concentrate on defending his scorecard, and outlining plans for the next term, his campaign got to score cheap political points by focusing on what Oshiomhole said about Ize-Iyamu in the past.

The Obaseki campaign, again, did not mind taking pot shots at Abdullahi Ganduje, the Kano State governor believed to have unresolved corruption issues who was appointed leader of the APC Campaign Council for the Edo State governorship election.

Ize-Iyamu had built his campaign message around his ‘SIMPLE’ agenda‎, which encapsulated areas his administration would focus on if he was elected governor. SIMPLE is an acronym which stands for Security, Infrastructure Development, Manpower Development, Public/Private Partnership, Leadership by example and Employment creation.

During a debate held before the elections, Ize-Iyamu had attempted to question Obaseki‎’s performance in office, particularly in the area of job creation – a key aspect of the governor’s M-E-G-A agenda. The governor claims that he promised 200,000 jobs when he assumed office in 2016, and has so far created 157,000 jobs.

But Ize-Iyamu disputed the claim, saying the employment figures bandied by Obaseki was bogus. The APC candidate had also alleged that hospitals and schools in Edo were without doctors and teachers.

The governor’s opponents had also drawn attention to the reported high rate of poverty in the state, as well as relatively low level of internal revenue generation and failure to diversify the state’s economy.

A PDP governorship aspirant, Mr. Kenneth Imasuagbon, had claimed that Obaseki did not deliver on his promises.

“He promised 200,000 jobs but he has no been able deliver them. Schools and hospitals are dilapidated. There are security concerns everywhere. The roads are still bad…”, Imasuagbon said shortly after Obaseki left the APC for the PDP.

While Imasuagbon’s comments could be seen as ‘political’, questions have been raised from other quarters over the Obaseki administration’s performance in job creation, as well as the health and education sectors, and infrastructure development.

However, Obaseki had defended his claims, particularly those concerning job creation.

According to him, the figures he brandished were based on a survey conducted by the National Bureau of Statistics and are therefore verifiable. “You can’t just come to a debate and roll out figures, forgetting that everything you say can be googled. When you talk in general terms, understand that people can just google and find out the facts,” he said.
‎
Be that as it may, the governor and his team will do well to understand that the Oshiomhole factor helped to sideline critical developmentmental issues that would have required more detailed explanation. And this is a symptom of the malaise that affects governance in the country, with personalities taking precedence over issues. ‎

Commenting on the development, a developmental economist, Mr Odilim Enwegbara, noted that Nigerian politics is mostly based on personalities, rather than issues.

Enwegbara further observed that the electorate is not so much bothered about issues in campaign messages because they don’t expect campaign promises to be fulfilled.

“Politics in Nigeria is all about personalities, issues are not valued so it is not surprising. Besides the voters themselves are not bothered because even when politicians make promises, they don’t expect those promises to be fulfilled,” Enwegbara said.

I have no power to bring back lawmakers whose seats are…

No, I am not returning to APC, it’s not a good thing…