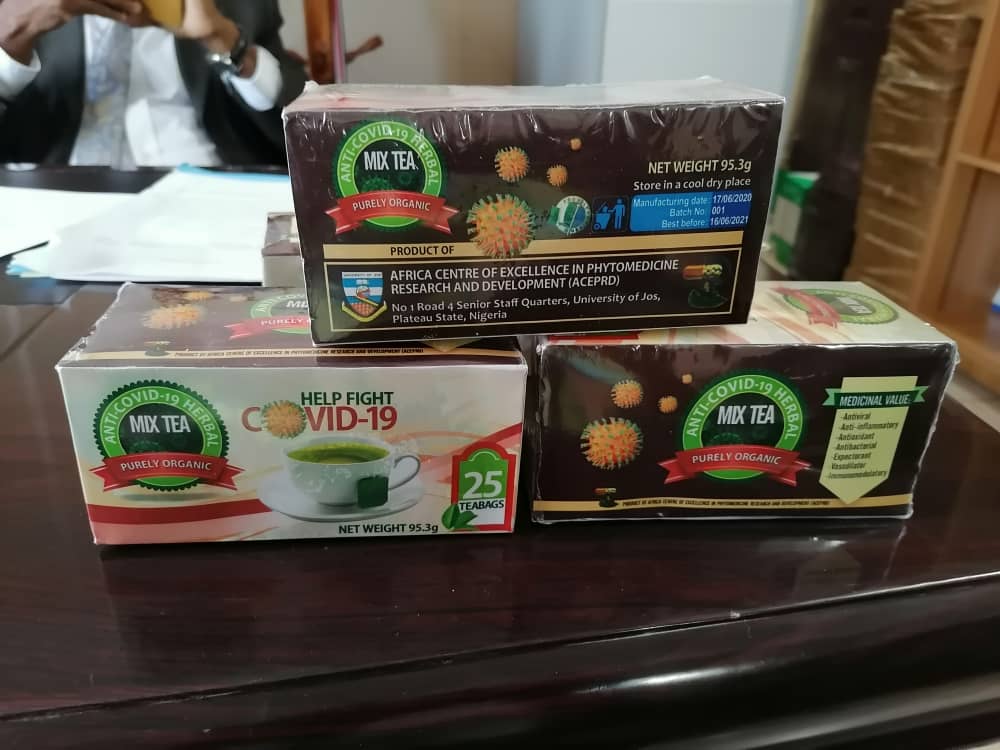 THE National Agency for Food and Drug Administration and Control (NAFDAC) has stopped the University of Jos (UNIJOS) from continuing with production, promotion and sale of a herbal remedy allegedly effective in providing immunity against the deadly COVID-19 disease.

UNIJOS had through its Africa Centre for Excellence in Phytomedicine rolled out the first batch of the herbal remedy on 17th June, 2020, without contacting NAFDAC, an agency responsible for regulating and controlling quality standards for foods, drugs and related products in Nigeria.

Mojisola Adeyeye, Director-General of the agency had ordered a probe into the herbal tea, Fraden Bitrus, Director/Head of Pharmacovigilance and Post Marketing Surveillance of NAFDAC in the agency told The ICIR on Monday.

The tea contains 25 bags in a pack. Its labelling urges users to put a teabag in a teacup, add boiling water over it and cover, allow to steam between 10 and 15 minute, then stir and remove the teabag. Thereafter, the teabag would be squeezed and discarded. It is to be sipped slowly between 20 and 30 minutes; and the process should be repeated every 12 hours. The product has a year lifespan, but it carries no NAFDAC registration number as required by the law.

The university’s Senate through a circular released on its behalf on 11th January endorsed the herbal tea and advised that employees of the university be sensitized to buy and use it.

The memo, titled “Senate Decision: Available Solution for the Prevention of the Spread of COVID-19” was signed by Monday Danjem, the school registrar and secretary to the Senate.

It was addressed to all deans, directors, heads of departments and units in the institution.

NAFDAC, however, told The ICIR that it would not dismiss the drug in its entirety, but its concern was that the product failed to go through required procedures.

NAFDAC’s Bitrus told The ICIR: “The office in Jos is on top of it. The truth is that NAFDAC was not informed initially. NAFDAC is on it now. I wouldn’t know, but I’ve been reliably told that they are aware of it and they are already investigating it.”

Asked to state NAFDAC position on such seeming contravention of the agency’s law, he said: “The issue is that we are talking of science. We don’t just pre-empt anything. They have to tell us what exactly is there. The fact is that there is a procedure for doing that. They may not have followed the procedure, but I don’t know what exactly it contains and I don’t know what exactly it can do. I can’t say anything about that. Of course, where it is possible, we will see where we can encourage them. But, when it is not something we can prove, there is nothing we can do about it.”

Bitrus also said the production and sale of the product have been put on hold.

Part II (5), paragraph A of the NAFDAC Act Cap. N.1 LFN 2004 confers on the agency the power to regulate and control the importation, exportation, manufacture, advertisement, distribution, sale and use of food, drugs, cosmetics, medical devices, bottled water and chemicals in Nigeria.

Paragraph B of that part places on the agency, the responsibility of conducting appropriate tests and ensuring compliance with standard specifications designated and approved by the NAFDAC’s council for effective control of the quality of food, drugs, cosmetics, medical devices, bottled water and chemicals and their raw materials as well as their production processes in factories and other establishments.

Paragraph F of the same part of the Act makes the agency to undertake the registration of food, drugs, cosmetics, medical devices, bottled water and chemicals in the nation.

Part IV (25) Two and Four of the Act are among paragraphs specifying punishments for contraventions against the Act. “Any person who contravenes the provisions of any regulations made under this Act is guilty of an offence and liable on conviction to the penalties specified in the regulations…

“Where an offence under this Act which has been committed by a body corporate is proved to have been committed with the consent or connivance of, or to be attributable to any neglect on the part of any director, manager, secretary or other similar officers of the body corporate or any person purporting to act in any of those capacities, he, as well as the body corporate, shall be deemed to be guilty of the offence and shall be liable on conviction to a fine of N 100,000.”

The University of Jos had received Eight Million Dollar grant from the World Bank to establish an African Centre of Excellence on Phytomedicine Research and Development (ACEPRD) in 2013.

The centre was to focus research on the production of modern drugs from plants. Core areas of research by the centre are biological evaluation, phytochemistry; plant science, biotechnology, formulation and production, clinical trials, commercialisation, and regulatory, education and social sciences, ethics, research publications and communication.

Efforts by The ICIR to get UNIJOS response on this report proved abortive as Abdullahi Abdullahi, Deputy Registrar, Information and Publications of the university, has not responded to request for an interview

After three unanswered calls around 8 pm on Monday 18th January, our reporter sent him a message, he responded the following day at 8:53 am: “Sorry, I saw your message very late yesterday. Thanks for bringing this to my attention. I’ll forward it appropriately and get back to you with the university’s response as soon as possible.”

Three reminders were also sent to him, but he did not reply.

Meanwhile experts have frowned at the university’s Senate decision and production as well as sale of the herbal tea by the centre in clear breach of the law.

Oyewale Tomori, a professor of virology and chairman, Nigerian government’s Expert Review Committee on COVID-19, told The ICIR that: “While the senate of the university, has the mandate to organise teaching and promote research, it may have gone beyond its mandate by approving and endorsing the product of research for human consumption. I think only the NAFDAC has such authority.”

He said any local remedy that comes out of the nation’s research effort must be subjected to laid down processes and procedures that are globally accepted and endorsed for approval for any product for human use.

Tomori added that such must be done in addition that products must receive the national regulatory approval for its safety and efficacy. “For COVID-19 intervention, we currently do not have any such product,” he stated.

Similarly, Dr Ejike Oji, Chairman, Federal Capital Territory (FCT) Ministerial Experts Advisory Committee on COVID-19, blamed some “rogue professionals” who try to do things the wrong way when the nation and the rest of the world battle a deadly pandemic, in a telephone interview with The ICIR.

He said every scientist knows the best way to do scientific research and would always follow procedures for conducting their work.

According to him, for scientists to get acceptability in terms of drug and medicament, the universally known way is to do randomized double-blind study of what they are producing.

He said as the researcher does that, he must have ethical review sign-ups, which is available in every country. In the case of Nigeria, it’s NAFDAC, he noted.

“There is an ethical review committee that looks at your research protocol, the fact that it is a human trial and who will agree that you can use those trials on the human subjects. A body that contains all such scientific research and drugs, which we call regulatory control on medicaments, in Nigeria happens to be NAFDAC. When you finish, you have to subject your review to that board.

“Anybody that wants to bring medicament for the consumption of human beings, you first develop you research product and because you’re going to do it on human trial, you must send that protocol to an ethical review board. Once they agree that your methodology is okay to do trial further, you go ahead and do your study. That study must be randomized, you can’t go and select people, you must use technological randomization to make sure you’re not just picking people you like to pick. That is why it must be randomized, and it must be double-blind study.”

He said when that is done, whoever sees the work, the methodology and finding they follow, would know that if such process is repeated anywhere in the world over and over again, the process would yield the same result.

He explained that when that is concluded, the findings must be taken to the regulatory authority (NAFDAC) to sign up. He said it’s only when NAFDAC has signed up that researchers are allowed to sell, adding that if the process is not followed, the scientist has gone foul of the scientific process and nobody should allow him to market his product. 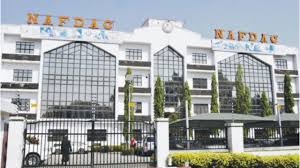 NAFDAC had in the past sanctioned firms which were seen to have fallen short of its standards or violated its laws.

It said in view of the unprofessional practice, all products manufactured by the company would not be allowed into Nigeria.

The agency restated its position of zero tolerance for substandard and falsified medicines in the country, in fulfilment of the regulatory obligation of safeguarding the health of the nation.

Also, in May 2020, the agency had warned the public to desist from making unapproved claims on remedies for COVID-19 disease, noting that “a claim of a cure must be subjected to clinical evaluation through well-controlled, randomized clinical trials following an approved clinical trial protocol.”

The agency encouraged all stakeholders to present the products of their research findings and allow the remedies to go through the internationally recognised process of approval through pre-clinical and where applicable, clinical trials.

It added that it was committed to encouraging and supporting sponsors with appropriate guidance to expedite the development of effective interventions to treat or prevent COVID-19.

The Nigerian government has promised to receive a consignment of 100,000 doses of COVID-19 through the World Health Organization before the end of January 2021, pledging that additional 10 million doses were likely to follow before end of March same year.

Plateau state, which hosts UNIJOS, had the third-highest cases in the country with 6,831. Lagos state led the chart with 41,400 cases, trailed by Abuja, the nation’s capital, which had 14,700 cases, according to data obtained from the Nigerian Centre for Disease Control.