Uncategorized
By Lukman ABOLADE On Oct 11, 2019 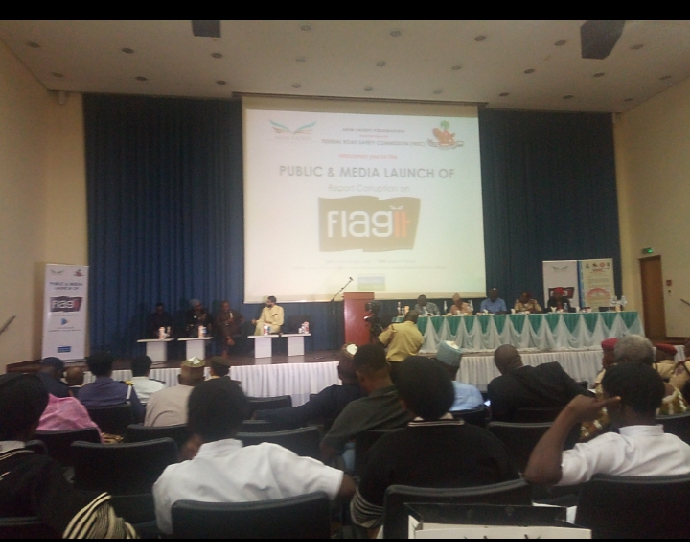 AKIN Fadeyi Foundation and the Federal Road Safety Corps (FRSC) on Thursday held the public and media launch of an anti-corruption application called FLAG IT on Thursday.

The launch which was held at the Shehu Musa Yar’adua Centre in Abuja was attended by dignitaries from civil society, government agencies and the press.

Vice President Yemi Osinbajo represented by the special adviser on rule of law, Rasheedat Waziri,  said the initiative aligns with the vision of the Federal Government on the fight against corruption. Corruption, the VP said,  slows down development goals in Africa.

The Corp Marshall of the Federal Road Safety Corps, Boboye Omoyemi during his address said corruption has occupied a large space in the country and that FRSC has been working on plans to ensure that the agency is rid of corruption.

“In terms of rescue services, this is one of the places that the FRSC has been receiving commendations, we have recovered millions of naira, pounds sterling and dollars from road accidents and no one has ever complained.

“Since my appointment, we have terminated the appointment of 72 staffs 52 are under trial and by the next meeting of FRSC board of directors, the board will confirm the disengagement of another 42,” he said.

He said the FRSC has a functional establishment unit, Servicom and desk office to work with the anti-corruption agencies like ICPC and EFCC.

According to him, the Flag-It initiative is a measure to enhance accountability and report corrupt practices as well as excellent services.

“Earlier this year EFCC boss Ibrahim Magu said between 2015 and this year about 1.3 trillion naira has been stolen by 32 individuals and one third of the amount using world bank rate and cost can construct 500kilometer road, build close to 200 school, educate about 4000 child from primary to tertiary institution at 25 million per child, 20000 unit of 2 bedroom flat across the country.

“The culture of corruption that has been created over the years have become very difficult to fight, we must start by talking to the man in the mirror by asking what is my role in fighting corruption and building a Nigerian nation of our dream,” he reiterated.

He added that with this initiative, the fear of Flag-It will become the beginning of wisdom.

Kole Shettima, Director, Africa Office, MacArthur foundation appreciated the Akin Fadeyi Foundation and FRSC for the event. He mentioned how he read an article on Thisday that brought his attention to Akin Fadeyi Foundation, then he said they must look out for them to see whether they can support the work that they do. “I was inspired by the fact that they are challenging all Nigerians that they also have a responsibility for ourselves, our children and the nation.

Chairman of the Presidential Committee on Corruption, Itse Sagey represented by Kelechi Amadi, said people are compelled to pay for the services they ought to get for free but this has not been possible because of corruption. The political economy of the nation has been producing overnight billionaires who are called leaders by the day, said Sagay.

Nigeria Representative of United Nations on Drugs and Crimes (UNODC), Oliver Stolpe lamented about how corruption is eating up Nigeria.

“In 2016, the UN and the National Bureau of Statistics (NBS) carried out a survey on bribery and it was found out that bribery is on high level in the country especially among traffic management agencies”.

Flag-it, therefore,  is an important tool in the arsenal of the anti-corruption war he said.

During the Panel discussion which consisted of Ademola Henry Adigun, an oil governance consultant , Ramotu Umar Bako, head of influencing and public engagement at Oxfam, Auwal Rafsanjani, Executive Director, civil society legislative advocacy centre, Ajuri Nagale, Special Assistant to the president on public affairs and Chido Omonuah who was the moderator of the discussion, the panel opined that there is need for partnership between the government agencies, the civil societies, the media and as well as the private sectors.

Auwal Rafsanjani added that the fight against corruption should be institutionalized and should not be a personal thing so that when a government leaves, the anti-graft fight will not leave with it.

Dapo Olorunyomi, the publisher of PREMIUM TIMES spoke about furthering the role of investigative media in Nigeria’s search for accountability.

He stressed the need to nurture investigative journalism and how technology can help to drive it.

Law enforcement agents look the other way as transporters in…