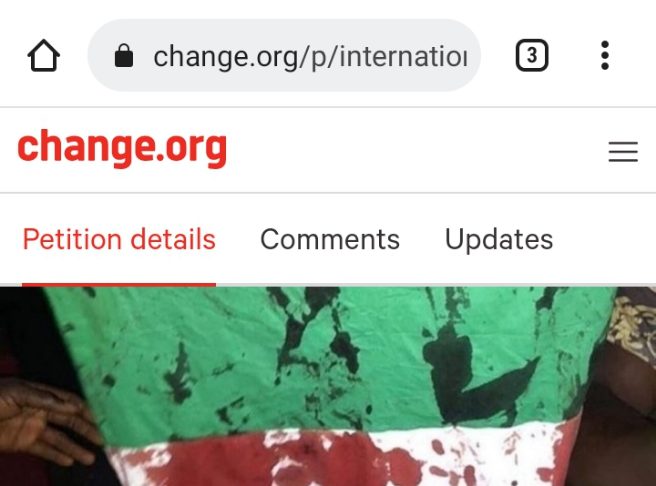 A PETITION seeking to jail President Muhammadu Buhari over the shooting of #EndSARS protesters at the Lekki Toll Gate on October 20, 2020 has received over 77,000 signatures.

The petition, which was initiated on change.org, a global online platform for petitions, by a former presidential spokesperson Reno Omokri on Tuesday, was addressed to the International Criminal Court (ICC) in the Hague.

When The ICIR visited change.org on Friday afternoon, it was observed that more than 77,000 people have signed the petition.

The petition is seeking Buhari’s prosecution over alleged violation of the rights of Nigerian youths by his administration.

Omokri said that the petition would be submitted to the President of the ICC Piotr Hofmański after it receives 100k signatures.

“By the grace of God, Buhari will retire to prison in 2023 and all future presidents will see that there is a consequence to the mass murder of Nigerians by the state,” Omokri said.

Tempers have continued to flare across the country since a copy of the report, which indicted the Nigerian Army of massacre at the Lekki Toll Gate, was leaked to the media.

According to the report, the Lagos #EndSARS panel found that nine protesters were killed during the military operation, while four others were presumed dead.

The report listed the names of 48 casualties.

Among the 48 casualties listed, 24 sustained gunshot injuries, while soldiers and police assaulted 15 others.

The panel also noted that 96 other corpses were presented by a Forensic Pathologist of the Lagos State University Teaching Hospital John Obafunwa.

It noted that testimonies of victims, eyewitnesses and independent experts employed to examine the footage taken during the incident shows that the Army shot live bullets at protesters, resulting in deaths and severe gunshot injuries.

The report also indicted Lagos State governor Babajide Sanwo-Olu in the intervention of the Army at the Lekki Toll Gate.

The report stated that the Army was brought in on the request and permission of the Lagos State government.