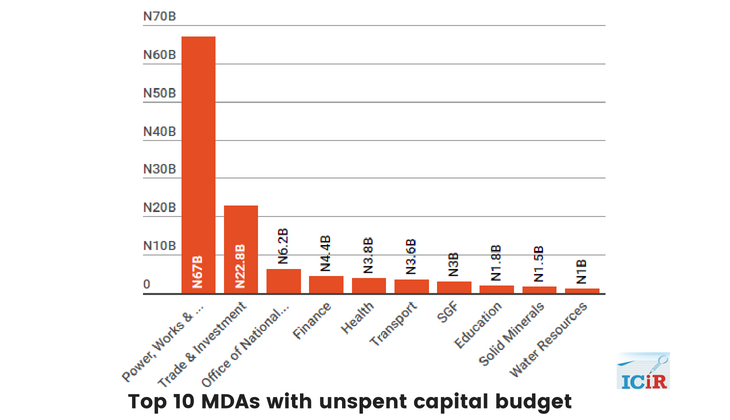 The inability of the Federal Government to meet its targets in the delivery of projects  is highlighted by the under-spending of 2017 budget. The ICIR can report that a total of N118b was returned by the Presidency, the Ministries, Agencies and Departments as unused capital budget for the previous fiscal year.

This represents 8.1 percent of N1.4 trillion which was the total capital budget released and almost four times the size of Federal Capital Territory Administration (FCTA) budget in 2017 which was N30.3billion.

The 2017 budget christened “Budget of Recovery and Growth,” according to Minister of Budget and National Planning, Udo Udoma, was carefully aligned with the Economic Recovery and  Growth Plan (ERGP) designed to ensure the re-establishment of  the  Nigerian  economy  to  the  path  of strong and  sustainable growth.

But in a document titled, “2017 capital performance for ministries, departments and agencies (MDAs) as at June 12, 2018” when the implementation of the budget ended, obtained exclusively by the ICIR, Ministries of Works, Power and Housing and Trade Investment top the list of Ministries with highest amount of capital budget balance returned to the government coffer.

Out of the N10.9billion released to the Presidency as its capital budget, only N10.7 billion was utilised leaving a total of N200million as unused which was returned to the treasury according to the document.

While Ministries of Works, Power and Housing has N66.9billion, Ministry of Trade and Investment returned N22.8 billion as unused capital budget.

Also, Ministry of Education has N1.8b, while Ministry of Solid Minerals and Water Resources with N1.4b and N1.1b respectively.

Those in this category include, the National Population Commission (NPC) that has N33.4 million, Ministry of Environment with N24.8 million and Head of Service, N13.1 million.

In these top least ten, Ministry of Youth Development has the least figure of N1.9 million followed by Ministry of Foreign Affairs which has N2.5 million and Ministry of Labour and Employment that has N3.2million,

Others are Ministry of Interior, N4.5million, Fiscal Responsibility Commission N5.7 million, Niger Delta Ministry, N5.9 million and Defence which has N6.9million.  This amounted to N101.5million.

However, the National Emergency Agency (NEMA) whose emergency readiness has been suspect has as much as N193million unused capital budget.

The ICIR reported how its Emergency Response Ambulance Bay (ERAB) in Abuja has remained in the state of disrepair.

Out of the total releases which stood at N266 million, only N72.5 million was utilized leaving a balance of N193.5 million at a time the agency’s air ambulance and rescue helicopters were grounded over expired insurance policy that cost between N20million and N17 million for the two aircraft respectively.

The document also revealed that the National Pension Commission (PENCOM) did not utilize the entire N375 million released to it for capital project while the National Hajj Commission of Nigeria (NAHCON) also failed to use its allocation of  N298 million.

In the 2017 third quarter budget implementation report, Director General of Budget Office of the Federation, Ben Akabueze explained that the execution of the 2017 Budget in the third quarter of the year  was  very challenging in numerous fronts.

This, he said was, mainly due  to  the extension  of  the  2016 capital budget to May 5, 2017, which according to him, effectively halted the execution of the 2017 capital budget until the end of the second quarter of the fiscal year .

The execution of the 2017 budget was also adversely impacted by the late passage of the Budget as well as the shortfall in the expected oil and non-oil revenue receipts.