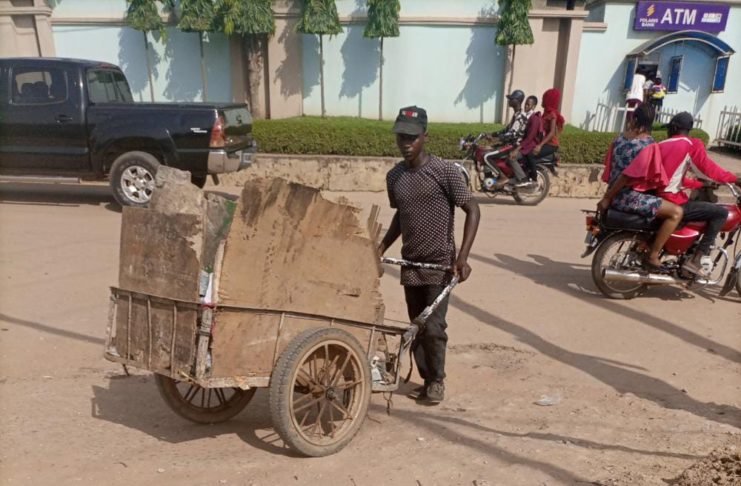 MOST residents of the Federal Capital Territory (FCT) rely on scavengers or cart pushers, popularly known as ‘Mai Bola’ or ‘Baban Bola’, to dispose their waste.

Though garbage trucks collect waste in some areas, the vehicles are mostly found plying streets within the city centre.

Inhabitants of the suburbs are therefore left with the option of patronising scavengers, who move from house to house at different hours of the day, collecting trash for a fee.

These scavengers are also found on streets in some high-brow areas, digging through trash cans searching for recyclables such as plastics, iron or aluminium.

However, some waste collectors abuse access to people’s homes and perpetrate criminal acts, including theft and destruction of property.

In January 2018, a resident of Kubwa, Emiola Balogun, lost her 6kg gas cylinder to scavengers who picked it up in her absence.

“My gas had finished and I wanted to refill it, so I brought the cylinder out to clean it. I went in for a short while and before I came out, I couldn’t find the cylinder. My neighbor said he saw baban bola carrying it, but he thought it was probably leaking and I had thrown it away,” she said.

Such occurrences led to restrictions on the activities of scavengers in Abuja by the Federal Capital Territory Administration (FCTA).

In a statement issued in July 2018, the FCTA restricted activities of the waste collectors to approved dumpsites outside the city centre.

“Baba Bolas are to operate only at the Gousa, Karshi, Bwari, Gwagwalada, Kwali, Abaji and Kuje approved dumpsites as opposed to moving from one neighbourhood to another collecting waste objects across the city of Abuja,” the directive read.

Several reasons were identified for the ban, including vandalisation of government properties, loss of valuables and armed robbery activities attributed to scavengers.

But three years down the line, baban bola operatives have remained on the streets of Abuja, and residents still face the challenges associated with them.

Taiwo Odewale, who lives in Jahi, told The ICIR that he had lost his phone to the cart pushers earlier this year.

“They have this stick they use in packing dirt. Sometimes, they attach glue to the end of the stick and pass it through the window. Whatever gadget they place it on gets stuck.

“That’s how they stole my phone one night some months ago. I know it’s them because when I woke up, I saw parts of the stick on my window. I think I have seen that stick three times by my window,” he said.

Is the ban being enforced?

When The ICIR contacted Abuja Environmental Protection Board (AEPB) over the continued presence of scavengers in Abuja, they replied saying the ban was still in place.

Admitting that scavengers could still be found even within the city centre, Public Relations Officer (PRO) of the AEPB Janet Peni said the Board had an enforcement team that arrests and evacuates the defaulters from the area.

The PRO stated that the government and the Board had communicated the ban to the scavengers, some of who willingly relocated to Guosa and other approved dumpsites outside the city.

“When we see them, we call our enforcement squad. They whisk them to Guosa. The ban is still there. We are still picking them up and that is why they are not many in the city centre,” she said.

She noted that residents were encouraged to report activities of the scavengers to relevant authorities so that necessary action can be taken.

But those in the suburbs have no alternative means of waste disposal due to the absence of garbage trucks within their vicinity.

Odewale said he had never come across a garbage truck since he moved into Jahi a few years ago.

“I have never seen those environmental buses in Jahi, since I’ve been living here,” he said.

Peni, however, noted that there were plans by the FCTA to allocate environmental workers to areas where they are absent.

Some of the waste collectors interviewed by The ICIR gave ignorance as a reason for defying the ban put in place by the FCTA.

Hassan, a 14-year-old teenager who collects waste from households in Kado-Kuchi, said he was unaware of the ban on scavenging within the city.

“I don’t know that they say make we stop,” he said in Pidgin English.

Suleiman, another waste collector who operates in Peace village, Lugbe also told The ICIR that he knew of no other location to carry out his business, which was his only source of livelihood.

“I no know where to go. Na my only work be this,” he said in Pidgin English.