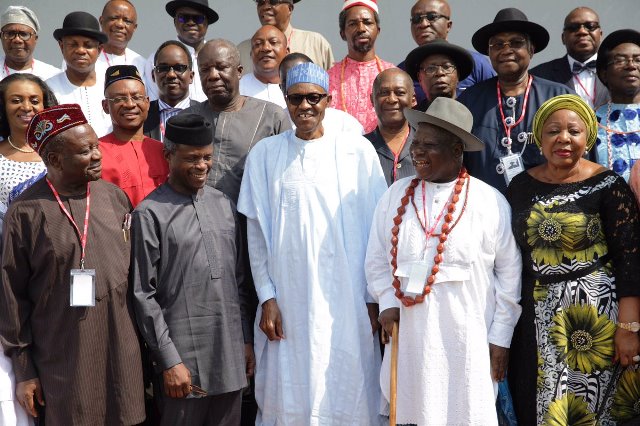 Stakeholders from the Niger Delta have presented 16 requests to President Muhammadu Buhari at a meeting they held behind closed doors with him at the Presidential Villa, Abuja.

The meeting which main agenda was how to bring the chaotic situation in the oil-rich region to a close,was also attended by Vice-President Yemi Osinbajo, some governors, ministers and other political appointees from the Niger Delta region.

The 16-point request was presented to the president on behalf of the delegation by the traditional ruler of Twon Brass, in Bayelsa State, Alfred Diete-Spiff.

The Pan-Niger Delta Forum, as the delegation described itself, demanded among other things: the allocation of oil blocks and awards of contracts to indigenes of the region; review of the amnesty programme; de-militarisation of communities in the region, and relocation of operational headquarters of oil companies to the region.

President Buhari assured the delegation that his administration is focused on its campaign promises of making the country safe, tackling corruption and making jobs available for the teeming population.

“We are determined to make life comfortable and affordable to all Nigerians. If anybody has a country to go to, let him go, we will stay here and salvage our country,” he said.

He however stressed that no appreciable progress would be possible if peace does not return to the Niger-Delta region.

The President said: “If we give peace a chance, investors will come here to invest. Nobody will invest in an insecure environment”.

“Please Your Excellencies, Your Majesties, Distinguished ladies and gentlemen; we all have our individual constituencies, let us try to pacify our constituencies.

“Let us first recover our country, secure the country and let us invite people who will invest.

“Let us create jobs for our people and let us be accountable to our people where we are sitting on treasuries, whether it is local government, state or the center.

“We should ensure that we rebuild this country. Nobody wants to fail. So, the only way out is, if people understand and believe that we are doing our best at all levels, then we will have some peace.

“But it they have reason to doubt our performance and sincerity, then we will have problem,” he said.

President Buhari pointed out that the service chiefs were also compiling their own report of the militancy situation.

He promised that “when I have these (service chiefs’) reports, including this one (just presented), we will revisit the situation to ensure that we succeed this time.”

Also present at the dialogue were the Service Chiefs, the Inspector-General of Police, Ibrahim Idris, and the Director-General of the Department of State Services, DSS, Lawal Daura.

The Chairmen, Senate and House of Representatives committees on Upstream, Downstream as well as Niger Delta were also at the meeting.