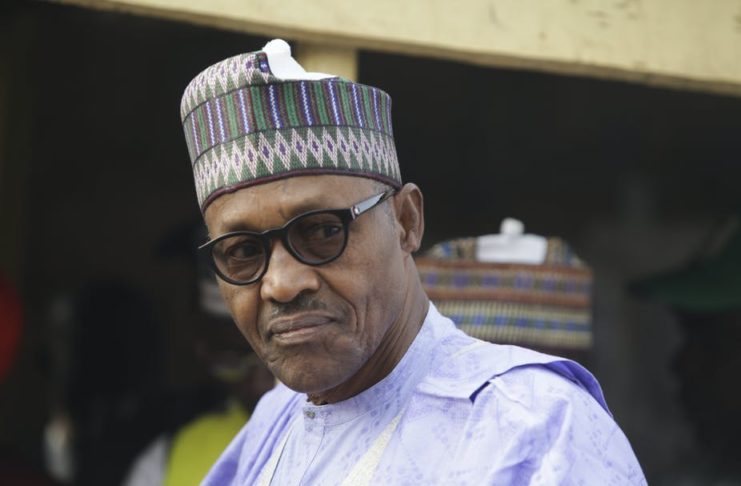 WORKERS in 20 ministries, departments and agencies (MDAs) of the Nigerian Federal Government received irregular payments and unapproved allowances amounting to N132.5 billion in 2019.

The development was disclosed in the 2019 audit report released by the Auditor-General of the Federation.

Irregular payments/payments of unapproved allowances was among the cross-cutting non-compliance issues that were identified in at least four MDAs covered by the audit.

Payment of unapproved and irregular allowances to staff contravened Paragraph 415 of the Federal Government’s Financial Regulations requiring all officers responsible for expenditure to exercise due economy.

“Money must not be spent merely because it has been voted,” Paragraph 415 of the Financial Regulations states.

However the audit discovered that irregular payments/unapproved allowances totalling about N132.5 billion was disbursed to staff in 20 MDAs, in flagrant disregard of the Financial Regulations. 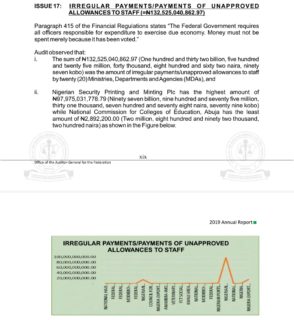 The Nigerian Security Printing and Minting Plc was the biggest offender, paying out about N97.9 billion in irregular allowances and payments to its workers.

The National Commission for Colleges of Education, Abuja, paid N2.8 million in irregular allowances and payments to its workers – the least amount among the 20 MDAs involved in the offense.

Other agencies involved in the infraction included: the National Hajj Commission and Nigerian Ports Authority.

The audit report also highlights the misapplication and misappropriation of public funds by several MDAs.

Specifically, the audit says that 10 MDAs misappropriated or misapplied a total sum of N18.1 billion.

The Federal Ministry of Agriculture and Rural Development misappropriated/misapplied the sum of N11.5 billion – the highest amount recorded among the 10 MDAs that were found to have mismanaged public funds.

The audit also observed cases of extra-budgetary spending/virement without approval in the MDAs.

Section 80(4) of the Constitution of the Federal Republic of Nigeria, 1999 (as amended) states that “no money shall be withdrawn from the Consolidated Revenue Fund or any other public fund of the Federation except in a manner prescribed by the National Assembly.”

Also, paragraph 417 of the Financial Regulations states that expenditure shall strictly be classified in accordance with the estimates, and votes must be applied only to the purpose for which the money is provided.

The Regulations states that “expenditure incorrectly charged to a vote shall be disallowed.”

But in contravention of constitutional and regulatory provisions, nine MDAs spent the sum of N49.5 billion without approval in 2019.

The N49.5 billion was not budgeted, and virement for disbursement of the funds was not approved.

The Federal Ministry of Agriculture and Rural Development recorded the highest amount of extra-budgetary spending/virement without approval with the sum of N48.4 billion.

The Pharmacists Council of Nigeria, Abuja, has the least amount of extra-budgetary spending – N1.6 million.

The 2019 audit report further observes that five MDAs paid the sum of N6.2 billion for contracts/services not executed.

However, the audit found that four MDAs flouted the circular by failing to return unspent balances on capital votes amounting to N6.1 billion to the treasury.

The Anambra-Imo River Basin Development Authority, Owerri, failed to return N2.5 billion unspent balances to the treasury while the Veterinary Council of Nigeria , Maitama, Abuja, did not return the sum of N36.1 million.

The irregular contracts were awarded without following due process.

Among the 18 MDAs involved in the practice, the Nigeria Police Force Headquarters recorded the highest amount spent on irregular contracts with N1.1 billion.

The audit also found that five MDAs paid the sum of N227 million as professional fees to external solicitors who were engaged without the approval of the attorney-general of the federation.

Establishment circular Ref. No.: SGF/PS/CIR/625/I/1 of 16th July, 2003 requires that prior consent and approval of the attorney-general of the federation should be obtained before the engagement of external solicitors and advocates by MDAs and payment of professional fees in respect of such services.

The Nigerian Security Printing and Minting Plc paid the sum of N112.3 million to external solicitors that were engaged without due process – the highest amount spent on the illegal activity.

The findings of the 2019 audit indicate that corruption is still thriving in Nigerian government institutions, despite claims to the contrary by President Muhammadu Buhari.

Buhari had, in a message to Nigerians to mark the New Year on January 1, said his administration was winning the war on corruption.

He said, “We have given the utmost priority to fighting corruption and other related offenses which have been a bane to the growth and prosperity of our dear nation.

“We have made major strides and breakthroughs through the innovative use of technology and forensics in the investigative and prosecutorial procedures with commendable results to show that the anti-corruption drive of our administration is succeeding.”

Buhari also claimed that the ‘accomplishments’ recorded in the war on corruption could be traced to the support his administration had extended to the anti-graft agencies.